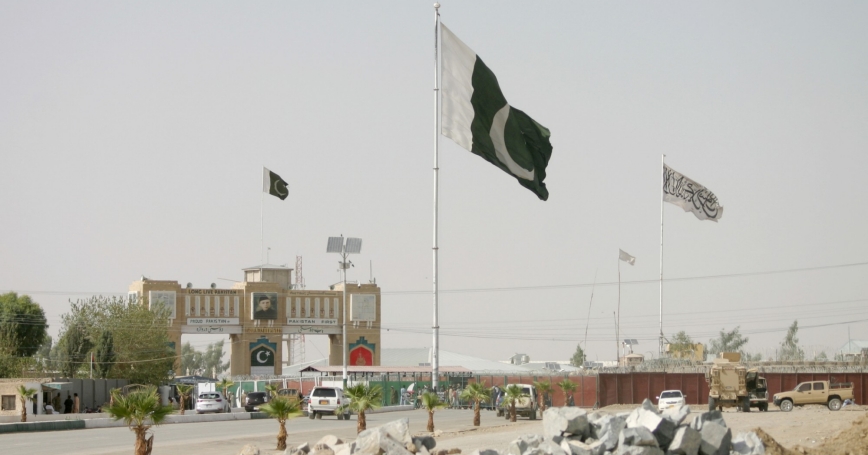 View of Pakistan and Taliban flags at the Friendship Gate crossing point in the Pakistan-Afghanistan border town of Chaman, Pakistan, August 27, 2021

The word “kaleidoscopic” is probably overused by political analysts, but it seems an appropriate way to describe the complex negotiations aimed at resolving the conflict between the government of Pakistan and Tehreek-e-Taliban (TTP), a group referred to as terrorists by some and insurgents by others. Each turn of the instrument causes the pebbles to move, leaving space for others to fill thus creating a new encircled landscape.

Whatever participants in this drama do or agree to affects not only those across the table in the negotiations but also creates opportunities for others to exploit to their own advantage. Anticipating how they might do so complicates calculations and constrains maneuvering on both sides of the struggle.

As in my previous comments in the Express Tribune, I claim no special expertise in Pakistan's current situation but write as an outside observer focused on the unique dynamics of negotiations with insurgent and terrorist groups. The most fascinating feature of the current situation is how the interests of the parties involved differ, but are inextricably intertwined.

The negotiations involve not just Pakistan and TTP representatives. There are multiple actors. To begin with, Afghanistan's Taliban are far more than facilitators. Pakistan has enlisted their assistance to exert leverage over the TTP, but the Afghan Taliban have their own agenda and concerns—they are players.

Not a participant in the discussions, Islamic State in Khorasan (IS-K) plays the role of a spoiler. The group may exploit the talks for its own purposes, hoping to benefit from the internal divisions that negotiations create. Al Qaeda currently lacks the muscle in the region to be a major factor but still leads a global jihadist enterprise that competes with Islamic State (IS) and is not without influence.

Beyond these leading roles, there is a discordant chorus of external actors, including China, India, Iran, Uzbekistan, the United States, and others. They share an interest in not seeing Afghanistan or Pakistan become a base for jihadist operations directed against themselves, but they also have competing interests in the two countries.

For decades, the Taliban has been the beneficiary of Pakistan's support, without which it would not have survived the hard years immediately after the American invasion. It is repayment time.

The current negotiations began when the Taliban's swift takeover of Afghanistan gave Pakistan an opportunity to enlist its assistance in dealing with the TTP. For decades, the Taliban has been the beneficiary of Pakistan's support, without which it would not have survived the hard years immediately after the American invasion. It is repayment time.

Pakistan sees the Taliban as a facilitator of discussions with the TTP, as an ally in persuading the TTP to negotiate, and as a guarantor of whatever agreement is reached.

Given the Taliban's continuing diplomatic isolation and the country's desperate economic situation, Pakistan can in return assist Afghanistan's new rulers in gaining acceptance and aid. Kabul's help in ending the long-running conflict could give the Taliban credibility as a responsible regime.

Taliban leaders understand the quid pro quo and are willing to assist Pakistan by facilitating talks and they may nudge the TTP to accept some sort of agreement that reduces the level of violence. If the TTP remains obstinate, then Pakistan expects—and reportedly the Taliban has promised—military action against those groups unwilling to compromise. It was this promise that—again, reportedly—has led Pakistan to renew negotiations. However, the precise language of this pledge is unknown and it remains unclear whether the Taliban will see it in its interest to turn on its TTP comrades.

In previous discussions with the United States, the Taliban proved to be a skillful, even wily negotiator, allowing its American interlocutors to infer more than they were promised on paper. Constructive ambiguity is sometimes necessary to bridge contentious issues, but it can lead to later allegations of deception and treachery. American officials claim there were understandings beyond the written agreement—the Taliban assert they complied with the terms they specifically agreed to.

The situation is further complicated by the increasingly active IS-K, which has been fighting against the Taliban for years. Although it formally became a “province” of IS in 2014, TTP fighters fleeing from Pakistan military operations in 2010 were part of its original core and its first commander was a TTP veteran. IS-K now seeks to attract dissatisfied Taliban veterans demanding that the jihad continue as well as those who simply have few peacetime prospects. The Taliban's abandonment of the TTP—or, worse, stabbing it in the back—could prompt an exodus.

It would be difficult for the Taliban to live up to a promise of military action against the TTP, which could be seen as a betrayal.

TTP's leaders are making their own calculations, but they start with different assumptions. The Taliban's victory in Afghanistan boosted the morale of jihadists everywhere who view the success as confirmation that God is on their side. If jihadist resistance fighters can defeat the Soviet Union and the United States, their thinking goes, a TTP victory over Pakistan seems inevitable. Since the fall of Kabul, the TTP has stepped up its attacks.

The TTP also considers the Taliban its ally. TTP fighters fought alongside the Taliban in Afghanistan. Hundreds of TTP fighters were freed from Afghan jails during the Taliban's final offensive. To cement the alliance, the TTP renewed its oath of allegiance to the Taliban after its capture of Kabul.

At the same time, the situation creates new challenges for the TTP. Maintaining unity is easier while fighting than when the fighting stops. The TTP's announcement that it is ending the month-long ceasefire may be just a maneuver, but insurgents can impose ceasefires on their fighters for only so long before the organization begins to erode. The TTP's agreement to negotiate with Pakistan in 2014 prompted some militants to leave the group. Some may do so again.

Fear of losing followers to the IS-K also constrains what the TTP can agree to with Pakistan. In the same way it can attract disgruntled Taliban veterans, IS-K could also attract TTP fighters convinced of eventual success and unwilling to accept any compromise. TTP dissidents have pledged allegiance (PDF) to IS-K in the past, others could do so in the future.

The TTP is not single organization, but a fissiparous umbrella group of reportedly more than 40 different formations that have only recently been reunited after years of internal fighting. It can come apart again.

Opposition to constraints on tactics or any kind of political compromise often leads to internal schisms in terrorist groups—especially those driven by religious ideologies. Terrorists are not conscripts yearning for the fighting to end so that they can go home, but self-selecting volunteers who, often dissatisfied with their lives, seek the rewards that joining a terrorist group offers—assumed status as a “warrior,” participation in an epic struggle, an exciting life, an opportunity to pursue baser violent instincts, allegedly with God's approval, passage to paradise. For others in the ranks, warfare is a source of income. Under which banner is of little concern. Loyalties are fluid.

Doctrinal differences also contribute to the divisions between IS and the Afghan Taliban and could split the TTP. One issue is the interpretation of several comparatively obscure Hadiths. The Ghazwa-e-Hind (Battle of India) Hadiths prophesize a great battle in India, which will result in the Muslim conquest of South Asia. Muslim participants in this contest will receive special rewards from God. The Hadiths have been used to support Muslim resistance in Kashmir and jihadist ambitions on the subcontinent.

Not everyone will welcome a peaceful resolution…some will view a cessation of the armed struggle as betrayal of their beliefs, the demise of the organization, an end to their chosen path of arms.

The second issue is how one defines the geographical term “Khorasan.” It is a Persian name that literally means “where the sun rises”—in other words, east of Iran. But the term is malleable and can be stretched to encompass parts of Iran, Afghanistan, Pakistan, and Central Asia. IS-K leans toward a broader mandate.

The Taliban has limited its horizons to Afghanistan. Both IS and al Qaeda see themselves as the vanguard of a global enterprise, although they differ on strategy. While al Qaeda has in the past assisted Pakistani jihadists with money and training, it emphasizes working with Pakistani jihadists to develop an al Qaeda presence in India, which is more acceptable to its Pakistan host.

In contrast, IS has already declared that it considers Pakistan to be part of Khorasan and IS-K's operatives—some of them former TTP members—have carried out terrorist operations in Pakistan, including in the country's major cities outside the tribal districts. Fragmentation of the TTP raises the specter of an urban terrorist (PDF) campaign.

In earlier statements, the TTP argued that the Ghazwa-e-Hind Hadith included Afghanistan, Pakistan, and India. One of its coalition members asserted that the Hadith included all of South Asia from the Bhutan and Nepal to Sri Lanka and Burma.

In recent comments, however, the TTP has disassociated itself from jihadist groups with transnational goals like IS and al Qaeda, stated that its fight is confined to Pakistan, and denied involvement in terrorist attacks on foreigners in Pakistan. This reversal appears intended to allay concerns that the TTP supports international terrorist operations.

What does this brief survey tell us about the dynamics of negotiating with terrorist groups? First, not everyone will welcome a peaceful resolution, not just because of unshakable commitment to basic goals, but because some will view a cessation of the armed struggle as betrayal of their beliefs, the demise of the organization, an end to their chosen path of arms.

Few terrorist organizations are monoliths. More often they are fragile coalitions of smaller formations. There is no guarantee of their continued fidelity, narrowing the ability of their leaders to maneuver and it may be safer for leadership to continue fighting.

Progress toward resolution may be further impeded by fear of losing ground to rival organizations that may fill their ranks with deserting hardliners determined to continue the armed struggle. Government pressure on one group can result in gains by more extremist elements, although governments may sometimes consider this advantageous.

Threats of ruthless crackdowns if compromise is refused may have limited credibility—even less to fanatics motivated by religion-based ideologies.

This commentary originally appeared on The Express Tribune on December 19, 2021. Commentary gives RAND researchers a platform to convey insights based on their professional expertise and often on their peer-reviewed research and analysis.