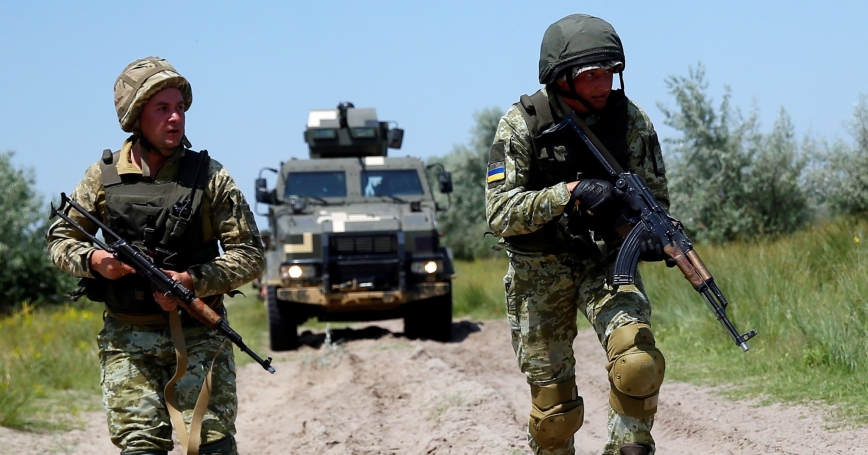 Warnings of an expanded Russian invasion of Ukraine have a “High Noon” feel. A renewed crisis could spur the United States and its NATO allies to go beyond, perhaps well beyond, their responses to Russia's 2014 assault. This militarization could cause a dramatic increase in defense spending by both the United States and NATO over the next decade.

This year Russia has undertaken a major military buildup near Ukraine's border and in Crimea. Kremlin leaders have questioned the legitimacy of independent Ukraine, falsely accused it of provocations, and warned the West against crossing ill-defined “red lines.” Moscow has called up “tens of thousands” of reservists on a scale unprecedented in the post-Soviet era.

Last month in Moscow, CIA Director and former U.S. Ambassador to Russia William Burns conveyed a warning. The United States and NATO allies worry that Russia may be planning an invasion. Washington has proclaimed an “ironclad commitment” to Ukraine's security.

Ukraine, with substantial help from the United States and NATO, is prepared to deter and defend against attack. Ukrainians can fight. In 2014 in eastern Ukraine, Moscow had to insert regular forces after hastily organized Ukrainians beat back Russian irregulars. Kyiv does not expect Westerners to fight its battles, but it does seek military support.

Ukraine, with substantial help from the United States and NATO, is prepared to deter and defend against attack.

The focus of increased assistance might be defensive weapons that can be rapidly absorbed by Ukraine's armed forces. They could help deny Moscow the capacity to conduct a large-scale heavy fire power campaign to rapidly occupy Ukraine east of the Dnieper River and seize key cities, such as Kyiv, Kharkiv, and Odessa.

Aid could include hundreds of anti-tank and anti-aircraft launchers and thousands of missiles such as Javelin and the older TOW. Low-cost and easy-to-use Switchblade man-portable loitering munitions might be provided. Coastal defenses may be greatly enhanced by the deployment of truck-mounted Harpoon anti-ship missiles. Lightweight Stinger anti-aircraft systems could enable Ukrainian forces to inflict heavy casualties on any early airborne and helicopter air assaults and down drones that send targeting data to Russian artillery. Aside from improving Ukraine's use of intelligence provided by NATO, its members could accelerate the sale of unmanned combat vehicles and associated precision-guided munitions (PGMs).

The United States is weighing whether to send Ukraine lightweight Stingers or other air defense systems and Iron Dome defenses against short-range missiles. The United States might provide Mi-17 helicopters, which were being readied for Afghanistan. Ukraine has bought Turkish TB-2 armed drones, which proved so effective in last year's Armenia-Azerbaijan war. Ukraine could benefit from better command and control, electronic warfare, and reconnaissance capabilities. All this could help it degrade a blitz, although supply or absorptive constraints might be hindrances.

If Russia were to invade Ukraine, it would likely employ massive cyber and electronic warfare tools and long-range PGMs. The aim would be to create “shock and awe,” causing Ukraine's defenses or will to fight to collapse. This was wishful Soviet thinking early in its Afghanistan war and America's calculus early in the Iraq war.

But if Ukraine does not break, Russia could pay a high price. Ukrainian defenders have geographical scale and a military hardened by seven years of fighting in eastern Ukraine. By avoiding Russian efforts at rapid encirclement, Ukraine could trade space for time. Stingers could down Russian airlifters and helicopters providing logistics support to forward fighters.

The prospect of formidable Ukrainian resistance could affect the Kremlin's risk-benefit calculus. If ground forces faltered, Russia could up the ante, such as by carpet bombing, a tactic it used in Chechnya and Aleppo.

A likely Western response to new Russian aggression may be expanded training and equipping of Ukrainian forces plus imposition of financial and economic sanctions on Russia more punitive than the weighty ones levied in 2014. If Ukraine's circumstances became more dire, the United States or NATO allies might consider intervening with their own forces. They could employ formidable air and naval power to gain air superiority over much of Ukraine, perhaps creating a “no-fly-zone.”

The United States and its allies may further reinforce NATO's eastern flank with major ground and air units. They might increase stocks of PGMs, such as the new medium-range ballistic Precision Strike Missile. Given Russia's potential mass use of long-range PGMs, NATO may have to improve its aerospace defenses.

If Ukraine's circumstances became more dire, the United States or NATO allies might consider intervening with their own forces.

There is no U.S. or NATO consensus to insert their own combat forces into Ukraine. One reason may be fear that direct combat could lead to a wider European war, perhaps even risking a Russian nuclear threat. Russian President Vladimir Putin has said that in 2014 “we were ready” to put nuclear weapons on alert. In 2018, he showed a boastful video simulating a nuclear-armed missile attacking Florida.

While Ukrainians may be unable to defeat a large-scale invasion, they could inflict high casualties, a sensitive issue in Russia. Occupying forces might be stretched thin and vulnerable to stay-behind insurgents.

In sum, the United States, its NATO allies, and Ukraine could impose immediate and painful costs on any Russian invaders. And for many years thereafter, Russia could face reinforced NATO military power.

This commentary originally appeared on The Hill on December 8, 2021. Commentary gives RAND researchers a platform to convey insights based on their professional expertise and often on their peer-reviewed research and analysis.