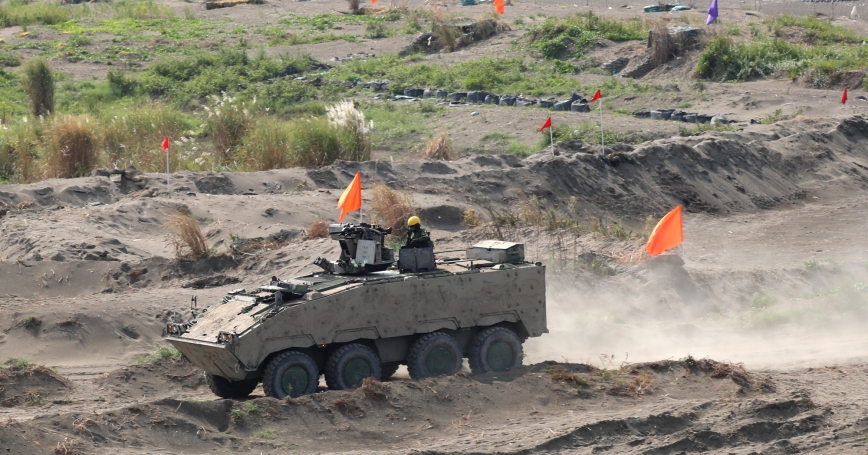 Armoured vehicles are deployed to carry out a shore defense operation as part of the HanKuang military exercise in Taipei, Taiwan, September 16, 2021

by David A. Ochmanek and Michael O'Hanlon

With the recent revelations that China has built mockups of American warships in its interior desert, presumably for military training purposes, we should not need more reminders about the urgency of bolstering deterrence against a possible Chinese attack against Taiwan. For Beijing, undertaking such an attack, especially an all-out invasion, would be a cosmic roll of the dice. But war games and calculations we have conducted show that China's armed forces might be able to pull it off.

For example, they might barrage Taiwan's airfields and air defenses, ports, big ships, lines of communication, and command/control systems with missile and air attacks before then loading up amphibious vessels for an assault on the island. With Taiwan's air defenses suppressed, the amphibious assault could be followed up with an airborne invasion by paratroopers and transport helicopters. China might well also strike American forces and bases in the western Pacific, to include aircraft carrier battle groups, aiming to cripple any U.S. effort to defend Taiwan.

Too many of those forces and bases are vulnerable to such attacks, and planned improvements do not, in the main, do much to fix those vulnerabilities.

The good news is that war games and analyses are pointing to new operational concepts and capabilities that can reverse the erosion of the military balance vis-à-vis China. Rather than continue to rely so heavily on big, easily targeted military platforms and facilities in the western Pacific, the United States may need to find ways to deploy and deliver large numbers of sensors and munitions from relatively invulnerable positions, both in the region and beyond.

The technologies to do so are available, affordable and not easily countered by China if acquired in adequate numbers.

The United States may need to find ways to deploy and deliver large numbers of sensors and munitions from relatively invulnerable positions.

Much of the recent hype in defense planning circles has been about exotic next-generation technologies that the United States is spending large sums of money to develop—hypersonic weapons, quantum computing, directed-energy missile defenses, and artificial intelligence (AI). These capabilities are worthy of investment, and some will contribute to America's future defense needs. AI is already doing so.

But much of what can move the needle is actually less sophisticated. As former Deputy Secretary of Defense Robert Work has argued, once this kind of scenario begins to unfold, the United States needs the ability to sink or disable hundreds of Chinese ships quickly and deny Chinese forces the ability to operate with impunity in Taiwan's airspace. Whether Washington chooses to respond militarily would be a decision for the president and Congress, based on the context of a future crisis. But having the capability to prevent an attempted invasion bolsters deterrence and reduces the chances of such a war occurring in the first place.

How to do it? Our Navy's surface ships will be challenged to operate within range of China's large force of anti-ship missiles. Air bases hosting U.S. combat and support aircraft as far from Taiwan as Guam likewise may be subject to intensive bombardment. And because the continental United States is 8,000 miles away, geography will not be our friend. Bombers can help if armed with the right cruise missiles, but most of them will be anywhere from 10 to 20 flight hours away from Taiwan if and when the conflict begins. Attack submarines on station can help as well. Yet, because of their expense, the Navy cannot come close to fielding enough of them to deliver the thousands of robotic vehicles that would be needed to confuse, overwhelm, and attack Chinese air and missile defenses and troop-laden assault ships.

To address the situation with the urgency it requires, the Department of Defense (DOD) may need to consider whether to reallocate several billion dollars a year from existing budgetary plans over the next five to 10 years to field these kinds of capabilities:

Having the capability to prevent an attempted invasion bolsters deterrence and reduces the chances of a war occurring.

American vigilance against other threats and scenarios could be critical, too. For example, the United States and allies may need more capacity and resilience to wage economic warfare against China in the event of a Chinese blockade of Taiwan or other major disruption to international trade. But for the Pentagon, the single most challenging high-end threat to a key American national security interest today is probably a Chinese invasion attempt against Taiwan. America should try to make that scenario unthinkable for Beijing—not with an unrealistic goal of dominating the western Pacific region militarily, as it once could, but by ensuring that China itself cannot dominate there.

David Ochmanek is a senior international/defense researcher at the nonprofit, nonpartisan RAND Corporation. Michael O'Hanlon is a senior fellow and director of research in the foreign policy studies program at the Brookings Institution, where he holds the Philip H. Knight Chair in Defense and Strategy.

This commentary originally appeared on The Hill on December 8, 2021. Commentary gives RAND researchers a platform to convey insights based on their professional expertise and often on their peer-reviewed research and analysis.