Taiwan Would Be Better Off Alone 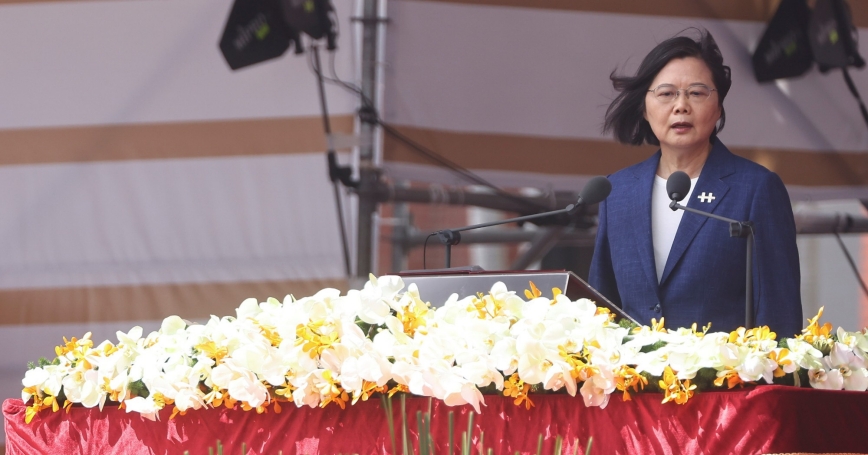 And then there were 14. That was the new tally of Taiwan's official diplomatic partners following Nicaragua's decision earlier this month to swap ties with Taipei for Beijing. The Solomon Islands and Kiribati did the same in 2019. But a curious fact has been overshadowed in the coverage of Taiwan's losses: Taipei has at times preemptively severed ties with partners “to uphold national dignity.”

These are smart decisions. Beijing's successful poaching of Taiwan's allies is harming the island's morale and tarnishing its image as a sovereign nation. As counterintuitive as it may seem, Taiwan should further consider unilaterally shedding all remaining partners to strengthen its hand long-term against China.

The uncomfortable truth about Taiwan's remaining allies except for the Vatican, its only partner left in Europe, is that they are with small and impoverished nations like Palau or St. Lucia that are of little geostrategic value. And while Taiwanese President Tsai Ing-wen has disavowed dollar diplomacy, that is exactly what continues to happen when Taipei competes with Beijing to keep countries in its camp.

Chinese leaders despise Tsai because she has refused to endorse the 1992 consensus, which Beijing interprets as Taiwan being a part of “One China.” Upon her election in 2016, Beijing terminated a tacit diplomatic truce not to steal any more of Taiwan's allies. Since then, the Tsai administration has lost partners, including Burkina Faso, El Salvador, Gambia, Kiribati, Nicaragua, Panama, Sao Tome and Principe, and the Solomon Islands.

As counterintuitive as it may seem, Taiwan should consider unilaterally shedding all remaining partners to strengthen its hand long-term against China.

Although I have previously argued that Taiwan could regain allies, that is not likely in the years to come, especially if the next president in 2024 also comes from Tsai's Taiwan-centric Democratic Progressive Party (DPP). There are already reports that Honduras might be next, and concerns in recent years have revolved around Haiti, Tuvalu, and the Vatican. By unilaterally turning down all official diplomatic relationships, Taiwan would shore up precious time and resources to further its diversification of economic relationships away from China to reduce Beijing's influence over the island.

It could build upon the momentum achieved by Tsai's New Southbound Policy, which prioritizes unofficial partnerships with Australia, India, Japan, New Zealand, the Philippines, Vietnam, and others. Taiwan would also avoid embarrassments that are sure to arrive as Beijing continues to leverage its massive Belt and Road Initiative (BRI) to entice Taipei's allies. Unfortunately, the BRI is particularly well-suited to the needs of developing nations.

Furthermore, relinquishing diplomatic partners could allow Taiwan to convert its Ministry of Foreign Affairs into a center for Track 1.5 or Track 2.0 diplomacy to focus on cooperation with powers of major consequence. These would include the United States, Japan, South Korea, Australia, India, Canada, and many Western European powers, including the UK, France, and Germany, that sympathize with Taiwan's plight. For example, this year the Group of Seven summit issued a statement of unprecedented support for Taiwan.

Taiwan could also reinvigorate its diplomacy in unofficial settings to improve other nations' understanding of its problems, as it did by participating in President Joe Biden's Summit for Democracy. In years to come, Taiwan could convince major powers to lobby more aggressively on its behalf at venues in which it is already barred because of China, including the World Health Assembly and the International Civil Aviation Organization.

An obvious problem with this suggested approach is that Beijing will appear to have won the diplomatic competition. But I would argue that this is not what actually matters.

Taiwan could also reinvigorate its diplomacy in unofficial settings to improve other nations' understanding of its problems.

Taiwan needs to strengthen its hand against China, in terms of reducing its economic dependence on the mainland and strengthening deterrence against it, and Taiwanese diplomats in Guatemala, Eswatini, the Marshall Islands, or elsewhere could more usefully be focused on these weightier outcomes. Taiwan seeks to maintain its regional and international space, and yet only major and medium-size powers can help it accomplish these goals. So why not prioritize relationships with them?

Of course, neither Tsai's DPP nor the opposition Kuomintang (KMT) would want to be responsible for downgrading Taiwan's presence. However, criticism of the current diplomatic approach has recently surfaced. The KMT nominee in Taiwan's January 2020 presidential election, Han Kuo-yu, called for a foreign policy geared toward economic growth that is “practical and realistic, rather than ideological.”

Han recommended reassigning foreign service officers to promote Taiwan's economy abroad rather than attempting to compete for allies. In early 2019, for example, Taiwan considered a $100 million bailout loan to Nicaraguan President Daniel Ortega, who had cut ties with Taiwan in the past, only to reverse course, and then cut ties in the end. While Taiwan apparently did not provide the loan, how much longer should it field such requests from allies who provide little benefit in return?

Another concern is whether letting diplomatic partners slip away undermines Taiwan's sovereignty. A complex concept, sovereignty essentially means that a government administers services to a population and/or controls territory.

The Taiwanese government might still meet that basic threshold, but from the perspective of international law, sovereignty typically requires recognition by another sovereign state. Still, it is hard to imagine the island's predicament would worsen, given that it is already locked out of nearly every significant government-to-government interaction.

I do not raise the proposal to unilaterally have Taiwan shed diplomatic partners lightly. Yes, Beijing would applaud such a move, and doing so would contradict American and Taiwanese policy goals to maintain international breathing room in the face of a more-assertive China.

But the upside is very significant. It would free Taipei from an unwinnable competition and refocus attention on what really matters: reducing China's coercive power by strengthening relationships with powers that can truly help.

This commentary originally appeared on Nikkei Asia on December 23, 2021. Commentary gives RAND researchers a platform to convey insights based on their professional expertise and often on their peer-reviewed research and analysis.