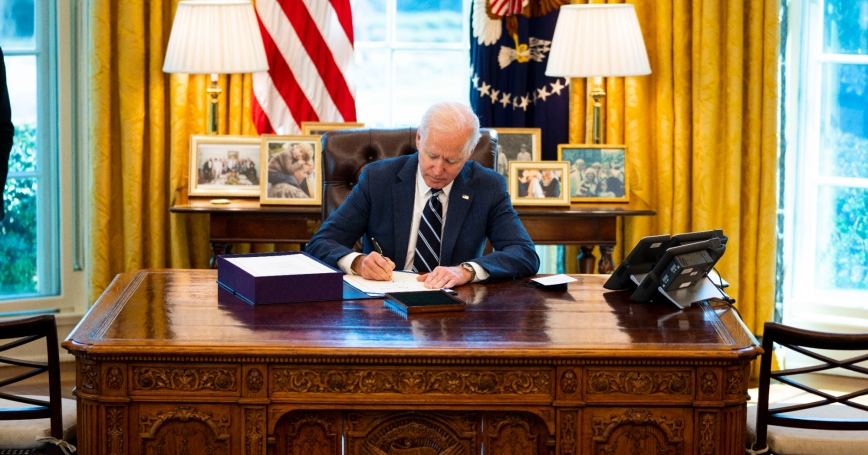 President Joe Biden signs the American Rescue Plan in the Oval Office, at the White House in Washington, D.C., March, 11, 2021

A pandemic is a terrible time to lose health insurance coverage. Yet, for a segment of the 23 million workers who suddenly lost jobs in spring of 2020, that was a fear-inducing possibility.

New data from the Census Bureau and the U.S. Department of Health and Human Services (PDF), among others, show that these fears ultimately did not materialize. Several temporary emergency “safety-net” provisions enacted in 2020 built upon the Affordable Care Act to keep the number of insured people stable. Untangling which were most responsible for this steady state, amid extreme job losses, will help policymakers determine how to proceed as the pandemic continues.

To test the effects of various health policies enacted in 2020 and 2021, we used a modeling tool developed at RAND to apply the changes in a stepwise fashion to real-world data on certain populations. Our analysis focused on the state of New York, which the pandemic hit hard: The unemployment rate jumped to 14.5 percent in April of 2020, up from 4 percent a year earlier. We used industry-level unemployment data from the state to estimate which workers lost their jobs, and we linked this information to data on income and family characteristics to estimate how many of those people may have become eligible for alternative sources of coverage via the ACA or temporary safety-net policies.

In 2020, for instance, under the Families First Coronavirus Response Act Medicaid froze its disenrollment policies. The FFCRA gave states incentives to keep people enrolled in Medicaid regardless of eligibility changes over time. Employers also extended insurance coverage to furloughed workers, which accounted for about 53 percent of workers who lost their jobs early on in the pandemic, according to the Commonwealth Fund.

In 2021, the American Rescue Plan (ARP) authorized enhancements and extensions to the ACA's tax credits. These lifted the income cap for insurance tax (usually 400 percent of the federal poverty level), which enabled higher-income people to receive a tax credit if they faced unaffordable premiums. The changes also reduced premium contribution requirements for people who were previously eligible for tax credits.

Consistent with published data from other sources, our analysis found no net loss of coverage in New York for 2020 or 2021. Digging deeper, we found that there were indeed significant declines in employer-sponsored insurance coverage, but they were offset by increases in public insurance.

There were significant declines in employer-sponsored insurance coverage, but they were offset by increases in public insurance.

The COVID-19 pandemic caused the first major economic downturn since the major ACA coverage provisions went into effect in 2014. Although it provided a foundation, the ACA alone could not have absorbed the effects of the pandemic's sudden job losses. Temporary expansions to the safety net enacted under FFCRA and the ARP also were necessary to stem coverage loss.

Policymakers now have new tools to staunch insurance loss among the most vulnerable. Medicaid will likely need to thaw its freeze on disenrollment as the public health emergency wanes, but the temporary policy shows that smoothing transitions for Medicaid enrollees can help families and individuals avoid steep eligibility cliffs. The enhanced tax credits could serve as a longer-term option to offer incremental improvement to ACA benefits and to further encourage insurance enrollment.

The Build Back Better Act, as approved by the U.S. House of Representatives on Nov. 18, retains these enhanced tax credits—at least through 2025. But that bill still has to wend its way through the Senate and, likely, back through the House. If it passes with those provisions intact, policymakers will need to decide whether to further extend these changes in a few years. If the provisions do not come through, they'll need to determine whether another vehicle can deliver these protections.

As the pandemic continues—or for future public health emergencies—policymakers will want to keep boosting tax credits and loosening Medicaid eligibility rules as available policy options. Our work, and a growing body of evidence, suggests that these can keep vulnerable Americans from losing health insurance when they need it most.

Christine Eibner is the Paul O'Neill Alcoa Chair in Policy Analysis; director, Payment, Cost, and Coverage Program; and a senior economist at the nonprofit, nonpartisan RAND Corporation. Jodi Liu is a policy researcher at RAND and a professor at the Pardee RAND Graduate School.