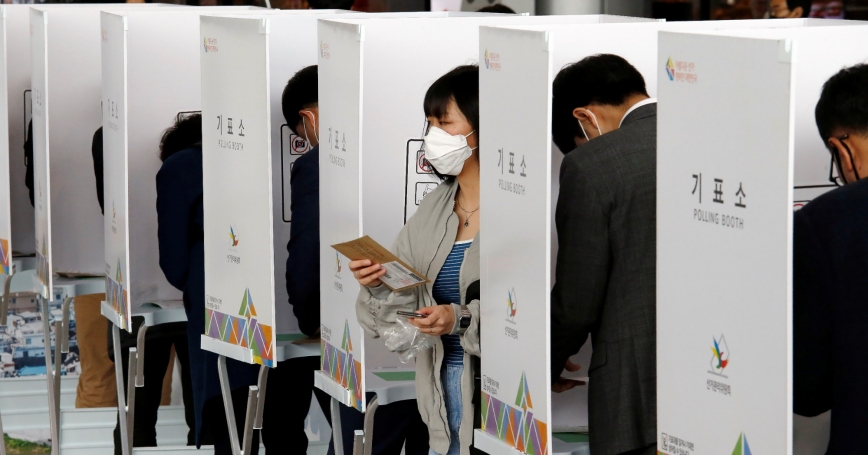 A woman leaves a voting booth during the parliamentary election at a polling station in Seoul, South Korea, April 10, 2020

On March 9, South Korea will elect a new president to succeed incumbent Moon Jae-in. With just over two months before voters head to the polls, the campaign has focused largely on personal attacks and allegations of corruption with little attention being paid to the pressing issues facing the nation.

The two leading candidates, Lee Jae-myung of the ruling Democratic Party and Yoon Seok-youl of the opposition People Power Party, are neck-and-neck according to the latest polls and both campaigns have used personal attacks in order seek an electoral advantage.

Lee, the former governor of Gyeonggi Province, faces a slew of corruption allegations and scandals, questioning his fitness to be president.

First, there are the claims that Lee assaulted his wife, Kim Hye-gyeong, causing a broken bone that required hospitalization and surgery. Lee's son was also recently accused of habitual gambling and visiting a massage parlor for prostitution.

Then there was the time that Lee, a lawyer, served as a defense attorney for a nephew who had brutally murdered his girlfriend and her mother in 2006, stabbing them 18 times and 19 times, respectively. Lee was criticized less for defending his nephew than for grossly downplaying the case as an unfortunate case of “dating violence.”

Most recently, Yoon's wife, Kim Kun-hee, has been accused of falsifying her resume, for which she recently apologized to the South Korean public. Kim was also mired in allegations of stock price rigging related to an imported car dealer. In July, Yoon's mother-in-law was convicted of fraud and medical law violations linked to her hospital business and subsequently sentenced to a three-year prison term.

There are signs that the South Korean public may be tired of the negative campaigning by both camps.

With the election already labeled the “most distasteful” in Korean history, there are signs that the South Korean public may be tired of the negative campaigning by both camps. There have been calls for both campaigns to refrain from character attacks and instead shift their attention to presenting their respective vision for the country.

The tenor of the campaign could be a distraction that makes it more difficult for South Korean voters to focus on the merits, policy platforms, and electability of each candidate. In fact, some South Koreans are concerned that the public, rather than voting for their preferred candidate, will be motivated to vote for the “less-disliked” candidate.

Given both Lee and Yoon's shortcomings and complicated family affairs, however, and amid growing criticism that neither candidate appears to have a clear and distinctive policy vision for the country, perhaps the candidates themselves might have a real incentive to maintain negative campaigning in order to keep voters distracted.

This reality could be troubling, not only for a South Korean public grappling with this important electoral choice but to the countries whose policies and interests will be most affected by the March election outcome.

The United States is focused on an all-encompassing strategic competition with China, which has required the concerted efforts of the toughest minds and resources in the Indo-Pacific and beyond.

Washington and its allies have joined forces through multinational cooperative pacts, such as the QUAD, a four-nation dialogue comprising the United States, Japan, India, and Australia, and more recently, the Australia, United Kingdom, and United States security pact known as AUKUS, to counter China's aggression.

Seoul has not signed on to any U.S.-centric collective pacts that are overtly pro-Washington or presumed to stand clearly against China.

Concerned about tipping too conspicuously in favor of the United States and consequently facing Beijing's ire, the Moon administration has opted to maintain a vague position on touchy issues that could result in either U.S. disapproval or Chinese coercion.

The Moon administration's indecision has led to greater frustrations in Washington and made it an easier target for Beijing's intimidation.

Rather than helping Seoul maintain equal footing between Washington and Beijing, however, the Moon administration's indecision has led to greater frustrations in Washington and made it an easier target for Beijing's intimidation.

The Biden administration has not overtly pressured Seoul to assume an unequivocal position on U.S.-China issues. However, the division between the allies over long-held common values, most notably dealing with the North Korean nuclear threat, raises concerns about South Korea's alignment on other issues that are of wider strategic consequence not only to U.S. interests but to Seoul's as well.

Candidate Lee is expected to continue the Moon administration's foreign policy and has emphasized a pragmatic approach on diplomacy.

This suggests that Lee, like Moon, may refrain from taking sides between Washington and Beijing. Lee also expressed opposition to joining a three-way alliance with the United States and Japan, calling the alliance “dangerous” and questioning Tokyo's trustworthiness.

Candidate Yoon has underscored the importance of the U.S. alliance to Seoul's national security as well as to the broader areas of cooperation, including technology and climate issues.

In a recent meeting with U.S. officials, Yoon expressed hopes that the alliance would be expanded and suggested that Seoul should be an active participant in efforts to build a global coalition of countries sharing the values of democracy, human rights, and a rules-based international order.

With the race still too close to call, the absence of meaningful policy debate and clarity on policy deliverables will continue to leave the South Korean electorate largely uninformed about what may be the most important decision they will make in the New Year.

Soo Kim is a policy analyst at the nonprofit, nonpartisan RAND Corporation and doctoral candidate at the Johns Hopkins University SAIS.

This commentary originally appeared on Nikkei Asia on December 31, 2021. Commentary gives RAND researchers a platform to convey insights based on their professional expertise and often on their peer-reviewed research and analysis.