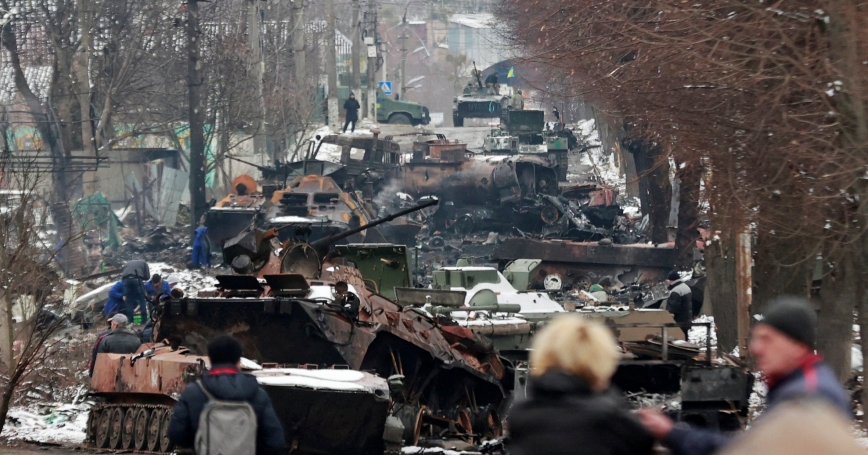 Destroyed military vehicles on a street, as Russia's invasion of Ukraine continues, in the town of Bucha in the Kyiv region, Ukraine, March 1, 2022

Russia has launched an unprecedented act of aggression against Ukraine. The United States and its allies must respond forcefully. But as they do, they should take into account the possibility of triggering a spiral of escalation that could lead to the only outcome worse than the invasion of Ukraine itself: a hot war between Russia and NATO.

Neither Russia nor NATO wants to go to war with the other. But history is rife with examples of states ending up in a war without initially having intended to fight, as well as cases of smaller conflicts sparking broader wars. And the circumstances of the Russian invasion create particularly significant escalation risks.

Russia has launched the largest military operation in Europe in at least a generation in a country that borders four NATO allies on land—Poland, Slovakia, Hungary, and Romania—and shares a maritime boundary with another—Turkey. With major operations now ramping up, the risk of an accident, such as a Russian military aircraft straying into NATO airspace while conducting combat operations, has grown. Russian cruise missiles have reportedly already hit targets close enough to the Polish border to set off sirens on the other side. A targeting error leading to a strike on NATO territory is far more plausible in the fog of war.

The Russian armed forces, now conducting a near-existential struggle, could misinterpret NATO efforts—completely justified under the circumstances—to reinforce frontline allies as an attempt to mount an intervention against them in Ukraine, and might well respond accordingly. If its nuclear forces are really now on a higher alert status, as President Vladimir Putin claims, further guardrails against rapid escalation have been lowered.

Ongoing efforts to help the Ukrainians resist Russia's aggression run risks as well. There were reports this week that Ukrainian pilots were to travel to Poland to retrieve gifted Soviet-made jets and fly them back to the fight. Once it became public, the plan set off alarm bells, and was quickly scrapped. But the understandable desire to help—and fast—will persist, and could lead to other similarly risky ideas.

Russia's war in Ukraine, in short, raises the risks of an accident, incident, or miscalculation that spirals into a NATO-Russia war. The paranoid nature of Putin's personalistic, autocratic regime further complicates matters. There is little question that he sees the sanctions as part of a campaign to overthrow his government. Fear that such a campaign is ramping up could lead him to retaliate directly. Russian cyber attacks against Western financial institutions could create pressure in the West to escalate, adding to the spiral.

Concern about escalation should not stop the West from responding forcefully to Russia's actions. But steps can be taken that might mitigate the risks.

First, the U.S. and NATO military chiefs should maintain the channels of communication they have with their Russian counterparts. While many existing consultative mechanisms with Moscow have rightly been severed, these links are essential to avoid miscalculation.

Concern about escalation should not stop the West from responding forcefully to Russia's actions. But steps can be taken that might mitigate the risks.

Second, during the phase of active Russian combat operations, these channels could be used to provide additional transparency—so long as doing so does not undermine operational security—about the nature of U.S. and NATO force movements to the allied states bordering Ukraine. It is in U.S. and allied interests that the Russian military, at a time when it is operating under extreme pressure, not be surprised by NATO activity and misinterpret a deployment to an ally as an intervention in Ukraine.

Third, the West could leverage some sanctions to push Putin to abandon his core war aim of decapitating the Ukrainian government and installing a pro-Russian puppet. Using relief of the central bank sanctions, for example, to compel a cease-fire and a negotiated settlement would not only minimize human suffering in Ukraine, it could also signal the limits of Western intentions, making clear the sanctions are not about overthrowing Putin's regime.

Fourth, assistance to the Ukrainian military should be coordinated among allies, carefully calibrated, and conducted outside public view. U.S. and allied military leaders should factor in escalation concerns when deciding what to deliver and how to deliver it. This will be an extremely difficult needle to thread, but it is essential.

Putin has led his country into an unprovoked, murderous war with its neighbor. As the West imposes costs, it should do so in a way that avoids a broader war that would cause even more death and destruction.

Samuel Charap is a senior political scientist at the RAND Corporation.

This commentary originally appeared on Financial Times on March 2, 2022. Commentary gives RAND researchers a platform to convey insights based on their professional expertise and often on their peer-reviewed research and analysis.