If Regime Change Were to Come to Moscow 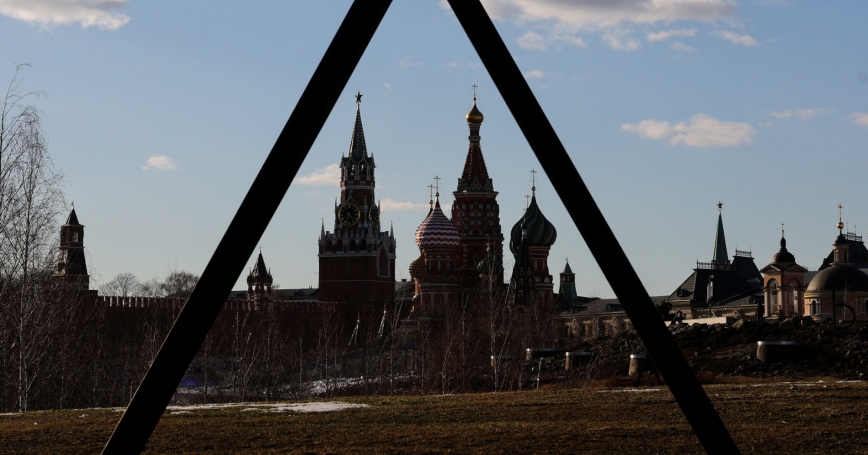 The Kremlin's Spasskaya Tower and St. Basil's Cathedral seen through an art object in Zaryadye park in Moscow, Russia, March 15, 2022

Strains in Russia over the war in Ukraine and punishing economic sanctions could spark regime change in Moscow. Although prospects for this are uncertain, the West might be prudent to begin considering how to deal with any new government. Past disruptions in Russia may offer some insights for Western policy, but new ground might need to be plowed.

Abrupt political changes in the former USSR and Russia are not uncommon. Examples include the replacement in 1985 of decrepit Soviet leadership by energetic if erratic reformer Mikhail Gorbachev, the failed putsch against him in August 1991 by Politburo conservatives, and the Soviet collapse in December 1991. Emerging then from the communist rubble was an independent, noncommunist Russia led by its elected president, Boris Yeltsin.

In the 1990s the Yeltsin government undertook political and economic reforms but did not reform the hidebound security sector, mainly the KGB and the military. The security sector's influence has helped lead to wars in Chechnya, obsessive espionage, stifling of political opposition, and invasions of Ukraine and Georgia. In the three decades since Russia's modern independence, repression at home and aggression abroad have never been greater than now. This may in part reflect the dominance of today's Kremlin by security sector veterans.

Unless the security sector is reformed, efforts by any new Russian leaders to open politics and improve relations with the West could falter.

Unless the security sector is reformed, efforts by any new Russian leaders to open politics and improve relations with the West could falter. The West might consider using some of its sanctions leverage to encourage security sector reform.

New Kremlin leaders, if they were to emerge, may need time to make changes. In fall 1986, U.S. Defense Secretary Casper Weinberger called Gorbachev's plan to withdraw troops from Afghanistan a “ruse.” It was not, but Gorbachev needed several years to implement it.

Crowing over Russian setbacks could harm efforts by a new government to forge a consensus for more-peaceful and less-repressive policies. In his January 1992 State of the Union speech, President George H. W. Bush could not help himself, “By the grace of God, America won the Cold War.” Yet on balance he and other Western leaders, such as German Chancellor Helmut Kohl, showed restraint, lightening Yeltsin's burden.

Engaging new leaders personally can pay dividends. President Bill Clinton developed a measure of trust with the mercurial Yeltsin, showing patience even when he invaded Chechnya. In return, Clinton obtained his acquiescence in other areas of importance, such as NATO matters.

Maintenance of NATO's open-door (PDF) policy has built vital confidence in Central and Eastern Europe, even at the risk of angering Russian leaders. NATO might lessen the sting to Russia of any future enlargement by maintaining objective criteria for admission.

If regime change came to Moscow, the West might reduce security risks by engaging new leaders to foster more-open and legitimate governance, such as through free and fair elections and anti-corruption measures. This strategy helped the West in the Yeltsin and early Putin eras.

If regime change came to Moscow, the West might reduce security risks by engaging new leaders to foster more-open and legitimate governance.

The West was right to try to draw democratic Russia further into the international system, and it may do so again if the Kremlin were to liberalize. But the West might be careful in how it proceeds. Expanding the G7 again to the G8 could be unwise; G7 members are advanced democracies. If Russia were to meet the criteria to join the Organization for Economic Cooperation and Development, the West might be supportive.

While experience can help guide the West in addressing some challenges, it may need to develop new policies and criteria for easing its extraordinary sanctions. The West may require that Russia halt military operations in Ukraine and withdraw all forces. It may insist that Russia fully respect Ukraine's sovereignty, independence, and territorial integrity within internationally recognized borders. The West might also demand that all Russian forces leave Belarus, where they have been propping up the unpopular Lukashenko dictatorship.

Some of these issues could challenge Western policy, but the need to make unprecedented choices could be thrust upon it.

This commentary originally appeared on The Moscow Times on March 18, 2022. Commentary gives RAND researchers a platform to convey insights based on their professional expertise and often on their peer-reviewed research and analysis.