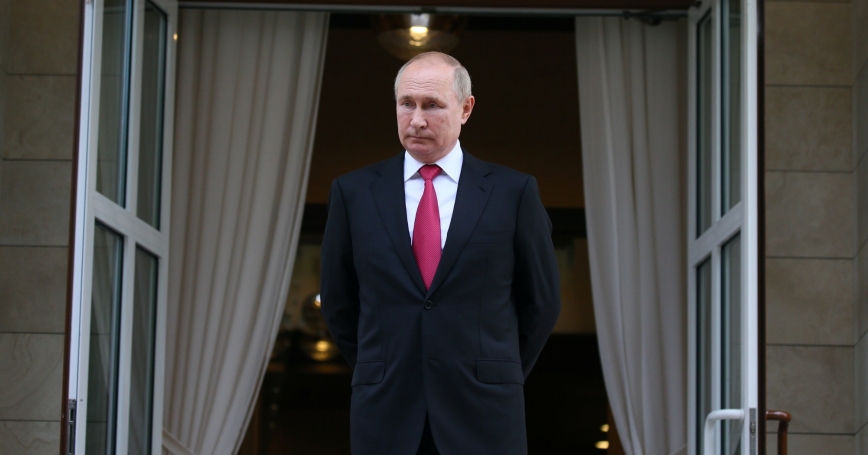 Photo by Vladimir Smirnov/Sputnik via Reuters

Vladimir Putin's astonishing lapse of judgment in invading Ukraine has fueled speculation that the Russian president may have taken leave of his senses. Former Secretary of Defense and CIA director Robert Gates commented in a recent CNN interview that Putin has “gone off the rails.” Sen. Marco Rubio, the ranking Republican on the Senate Intelligence Committee, tweeted after the invasion began that, “I wish I could share more, but for now I can say it's pretty obvious to many that something is off with Putin. He has always been a killer, but his problem now is different & significant. It would be a mistake to assume this Putin would react the same way he would have 5 years ago.”

If these assessments are accurate, then the world faces a highly disturbing situation: a mad king in possession of the world's largest nuclear arsenal, as he reminded the world when announcing an alert of his strategic deterrent forces February 27. If Putin is not a rational adversary, then the policies that would deter a more-reasonable man may fail or even backfire.

As nuclear strategists recognized decades ago, deterrence is necessary—but it isn't always sufficient. The analysts and theorists who worked on these issues were bedeviled, in particular, by the problem of nonrational opponents. As the nuclear strategist Herman Kahn put it in 1962, “We want to deter even the mad.”

Theorist Patrick Morgan preferred the term “sensible” over “rational” to make it clear that an adversary doesn't have to be perfectly rational to be understood and his actions anticipated. Sensible actors may have goals that are anathema to our own, but they pursue them in ways that appear likely to attain those objectives. They also may commit human errors. But even Morgan acknowledged that not every opponent will be “sensible” enough to respect a deterrent threat.

Fortunately, during the Cold War, the problem of irrational leaders wielding nuclear weapons never became acute. But now Putin's behavior may be turning it into an immediate concern.

Critics of nuclear deterrence theory find the whole framework baseless. Real-world humans, these critics say, are almost never “rational” by the stringent definitions of economics and game theory, under which a competent leader can pursue arbitrary or bizarre goals, but appear more “rational” than one who makes errors while aiming for goals that make sense to us.

Putin's invasion appears to have been based on a completely misguided assumption that Ukrainians would welcome Russian soldiers as liberators.

So is Putin just making mistakes, or irrational? His claim that the Ukrainian government, which is headed by a Jewish former comedian, is somehow “fascist” and “Nazi” was preposterous. His invasion appears to have been based on a completely misguided assumption that Ukrainians would welcome Russian soldiers as liberators. Even more unaccountable is how Putin seems not to have anticipated how rapidly his actions would alienate world opinion.

Yet all this doesn't mean that Putin is necessarily too irrational to be convinced to change course. (Or, per Kahn, his subordinates might intervene as the situation continues to deteriorate.) At the same time, the United States and its allies must account for the possibility that even in the face of credible deterrent threats—military or economic—Putin might double down and lash out.

It is a mistake to assume that a nonsensible opponent necessarily suffers from some diagnosable psychopathology. Autocratic rulers like Putin and North Korean dictator Kim Jong-un have incentives so different from those of an ordinary person as to warp their “rational” goals. They tend to conflate the continuation of their rule with their personal survival, with good reason. Perpetuating their own rule at any cost or risk of nuclear war is insensible to everyone else, but rational for them.

Therefore, while Putin's apocalyptic rhetoric might be alarming, it is not necessarily a symptom of a deranged mind. For instance, Putin declared in a 2018 interview that “if someone decides to annihilate Russia, we have the legal right to retaliate. Yes, it will be a catastrophe for humanity and for the world…but we will ascend to heaven as martyrs, while they will just croak before they know what hit them.” On another occasion, the Russian president asked, “What use to us is a world without Russia?”

Of course, a previously competent ruler could suffer a psychotic break or a stroke that changed their personality, but other mechanisms can make rulers defy expectations. Dictators, particularly those who have been in power for a long time like Putin, often come to exist within information bubbles where no one is willing to tell them “no” or to challenge their beliefs. Erroneous beliefs can inspire poor-quality decisions without rising to the level of outright delusions.

Still, if Putin is not a sensible man, then cost-imposing strategies such as the devastating economic sanctions that are continuing to pile up may fail to temper his misbehavior. Instead, other, more-rational Russians may need to be the targets of sanctions and other cost-imposing measures designed to influence Russia's policies in Ukraine. Increasingly isolated and desperate, Putin might still try to suddenly escalate the conflict rather than back down, potentially imperiling countless innocent people. To account for this treacherous possibility, Western leaders need to plan for the worst while hoping for the best.

Edward Geist is a policy researcher at the nonprofit, nonpartisan RAND Corporation. His research interests include Russia (primarily defense policy), nuclear weapons, and the potential impact of emerging technologies on nuclear strategy.