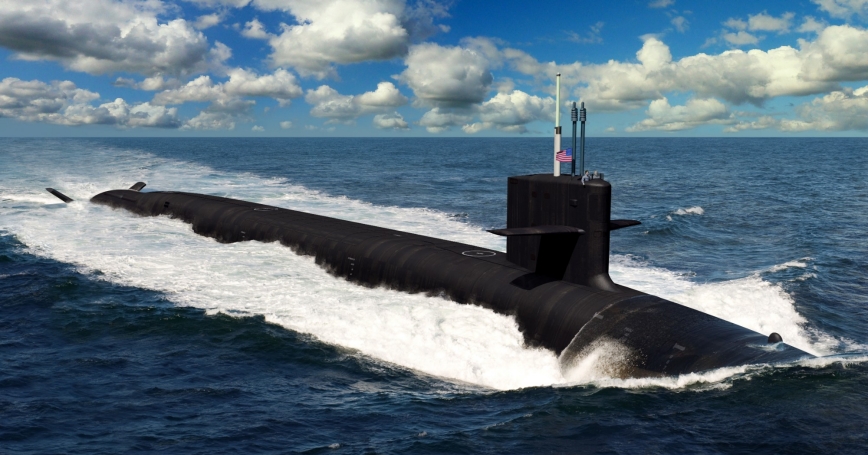 An artist's rendering of the future Columbia-class ballistic missile submarine

Russia's war in Ukraine brings into stark relief the true meaning of revisionist power. It could serve as a catalyst to urgent action in countering both Russian and Chinese revisionism. On September 15, 2021 President Biden announced the creation of AUKUS, a trilateral, experimental arrangement among the United States, Australia, and the United Kingdom focused on defense technology that would deliver nuclear powered submarines to Australia by 2039. The President also made clear that AUKUS would extend beyond cooperation on submarines, and these sentiments have been echoed in Canberra and London.

Even with the ongoing war in Ukraine, Australian Secretary of Defence, Greg Moriarty, is in Washington to discuss ways to get AUKUS moving. AUKUS could open new avenues for cooperative development (co-designing) and production (co-building) of armaments (the P-8, Triton, and Jammer are examples to follow). Given the lag time to 2039, it would likely be important to demonstrate the utility of AUKUS in facilitating a broader defense relationship by laying out a realistic, clear-eyed vision for the trilateral relationship, establishing a framework and plan to manage the work, identify and then address the existing barriers, and ensure that metrics are in place to measure progress. Taking all these steps may help get AUKUS off the ground, which could bring major benefits to the allies.

AUKUS is an example of mini-lateralism, which can be thought of as a complement to—or a substitute for—traditional intergovernmental cooperation. AUKUS isn't a new alliance. It's an additive, focused security partnership that is intended to deepen collaboration on advanced military capabilities and technologies including cyber, artificial intelligence, and quantum concepts. It builds on the Defense Trade Cooperation treaties negotiated by the Bush administration in 2007 and ratified in 2010. AUKUS presents new opportunities, the first and most often mentioned is that it provides Australia with nuclear powered submarine capability. The U.S. has only ever shared nuclear propulsion technology once before, and that was with the United Kingdom. Second, AUKUS aims to promote greater sovereign capability for Australian and British defense industry by providing access to U.S. technology. Third, it is designed to push back against any potential weakening of the alliance bonds by selectively combining defense capability between Australia, United Kingdom, and United States in the face of strategic competition with China and Russia.

AUKUS could not only deliver new submarines for Australia, but it could become the springboard for revolutionizing how the U.S. works with a select group of its most capable allies.

The promise of AUKUS stems from the bringing together of three capable allies in a grand experiment, with a high-stakes mini-lateral relationship that depends first and foremost upon trust to deliver highly valued capabilities. If effectively implemented, AUKUS would not only deliver new submarines for Australia, but perhaps more importantly, it could become the springboard for revolutionizing how the U.S. works with a select group of its most capable allies through the extraordinary depth of technological development, access to highly classified materials and expanded sharing of intellectual property.

Canberra, London, and Washington have each responded to AUKUS differently. While all are committed at the diplomatic level, Canberra is perhaps the most deeply engaged, investing significant funding and resources to ensure that both the nuclear-powered submarine and advanced capabilities workstreams succeed. As one anonymous Australian official noted, AUKUS has virtually restructured the entirety of their defense and foreign affairs thinking. United Kingdom national security advisor Stephen Lovegrove described AUKUS as “perhaps the most significant capability collaboration anywhere in the world in the past six decades.” AUKUS fits neatly into the UK's Integrated Review, which promotes London's return to the Indo-Pacific. Of the three powers involved, however, the United Kingdom is, at least on the surface, the junior partner. The U.S. sits somewhere in between, broadly keen to make it work, but distracted by countless other major world events, like the ongoing strategic competition with China.

The barriers to AUKUS success are numerous. At the national level, each country has its own political and economic challenges. Australia will face an election sometime between now and the end of May 2022. If the current Morrison government wins re-election, then it's a safe bet that AUKUS will continue along its current path. The opposition Labor party has also indicated support for AUKUS, and Prime Minister Morrison wrote to the Labor leader thanking him for his “bipartisan approach.” Yet, a new government brings with it a new set of priorities, which could have consequences for the early stages of AUKUS's development. The U.S. mid-term elections this year will soon distract Congress, and so the legislative actions necessary to bring AUKUS into being may well have to wait until 2023. The United Kingdom will go to the polls no later than May 2024.

Given its considerable current international challenges, the United States counts AUKUS as only one among many tasks it must undertake. An essential element of AUKUS's success would require Congressional action, including approval for the nuclear agreement under the Atomic Energy Act. Beyond legislative compliance, the bureaucratic infrastructure to implement AUKUS would need to quickly be established. This includes funding and empowering the working groups with deep analytic expertise to hammer out the details of the security pact. The imbalance of interest between the three nations suggests that Australia has the most to lose, and so it will likely invest the greater effort to see that AUKUS succeeds.

What does AUKUS need to be effective?

AUKUS success depends upon the development of a new legislative framework in the U.S., the commitment of organizational resources, empowering the working groups tasked with governing AUKUS, ensuring access to the requisite expertise, the ability to identify and manage barriers to success, and the employment of measurable indicators of success. These are not easy tasks, and each carries some risk.

An unprecedented U.S. legislative framework would include not only information sharing agreements on nuclear propulsion, but also on much broader areas in key sectors. Such a framework could allow for innovation to flourish, particularly as AUKUS looks for opportunities in artificial intelligence, quantum, and other key defense technologies. The role of the private sector, and the complications therein, is an under analyzed aspect to AUKUS. For example, Lockheed Martin was going to provide Australia with the weapons systems for its recently terminated French submarine contract; now the company may well be the supplier of the weapons systems for newly planned Australian nuclear submarine. And yet, just two days after the announcement of AUKUS, BAE and Rolls Royce won the contract to design a new nuclear powered submarine for the UK, which may have implications for Australia's new submarine, and Lockheed, too. The involvement of defense industry will also raise issues regarding commercial data sensitivities and intellectual property issues—both of which should be studied, as they may require additional legislative attention.

AUKUS would need to be adequately resourced to take on these tasks, which would entail a distributed governance framework with shared responsibilities and committed staff and resources, including political and organizational support from Canberra, London, and Washington. In the U.S., for example, the Departments of Defense, State and Energy would have roles to play. It has been assumed that AUKUS is largely focused on the Indo-Pacific, thus drawing interests from U.S. Indo-Pacific Command. That said, given the broad technology interest in AUKUS, it also draws in the Defense Technology Security Agency and Cyber Command. The U.K. would see input from the Cabinet Office, the Ministry of Defence, the Foreign, Commonwealth and Development Office and the Royal Navy. In Canberra the primary interests will be from the Department of Prime Minister and Cabinet, the Department of Foreign Affairs and Trade, the Royal Australian Navy and the Department of Defence. Two Australian cabinet officials have defence portfolios relevant to AUKUS, including the minister for defence as well as the minister for defence industry.

In launching AUKUS, a number of working groups have been established to study and flesh out the cooperative details. In order to be effective, these working groups could be empowered by strong leadership, informed by evidence-based analysis, and encouraged to convene regularly. They could go beyond admiring the problems to identifying solutions. The success of the working groups would also greatly depend on the active and continuous support of senior leadership from all three nations.

AUKUS is likely to shine a bright light on the barriers to collaboration—not only technical, but also bureaucratic, budgetary, cultural, regulatory, political, and strategic.

More specifically, the AUKUS working groups could have access to the requisite expertise. Senior leaders could also ensure that the working groups have access to experts, practitioners, and program implementers from Australia, the U.S., and the UK who would understand the breadth and depth of the existing barriers and the necessary workarounds. This could be challenging: in the process of developing the cooperative framework, AUKUS is likely to shine a bright light on the many barriers to collaboration—not only technical, but also bureaucratic, budgetary, cultural, regulatory, political, and strategic.

AUKUS could benefit from clear, measurable outcomes for each working group, developed from the outset. For example, successfully meeting working group deliverable dates is an obvious and essential metric, as is consistent maintenance of working group meeting schedules and speed of decision making. Progress in armaments cooperation is another metric, and includes changing processes that facilitate innovation and deepening of cooperation. The ability to resolve key bureaucratic barriers (such as routine overclassification of information) and regulatory challenges (such as technology transfer limitations) would be yet another hurdle to overcome. The three capitals might develop multi-year plans detailing proposed projects, anticipated costs, and timelines for delivery. Success on each of these projects could be reported annually.

The experiment of AUKUS clearly seems to offer significant opportunities for Canberra, London, and Washington. More than a repackaging of existing capabilities, AUKUS reimagines the way in which three capable allies could work together, more closely than ever before, in many respects. The potential success of AUKUS will rely upon the effective management of this mini-lateral arrangement, and each countries' willingness to adopt new policies and make legislative changes to allow for this close collaboration. Making such changes would require strong management, but even more so, it would require the recognition from all parties that such changes are necessary to make progress in addressing common, overriding strategic goals. What happens now will determine whether the U.S., Australia and the UK can compete more effectively against China and Russia, or whether AUKUS becomes an interesting footnote in the story of what could have been.

Jennifer D.P. Moroney is a senior political scientist at the RAND Corporation in Arlington, Virginia, and was inaugural director of RAND's office in Canberra, Australia, from 2014 to 2018.

Alan Tidwell is director of the Center for Australian, New Zealand and Pacific Studies at the Edmund A. Walsh School of Foreign Service, Georgetown University.

A version of this commentary was originally published in The Strategist on March 22, 2022.