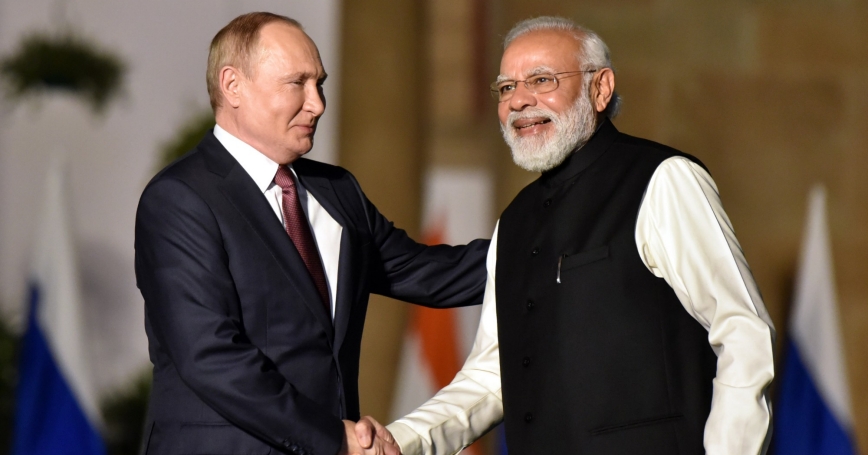 Since Saturday, India has abstained on three consecutive U.N. resolutions related to Russia's invasion of Ukraine. These votes were entirely unsurprising given New Delhi's ties with Moscow dating back to the Cold War. Nowadays, India seeks to maintain an open line of Russian arms procurement because its military is mostly comprised of Soviet-era and Russian systems. India further seeks to leverage strong Russia ties against its Chinese adversary, and greatly appreciates Moscow's support of its position on disputed Kashmir.

But the geostrategic winds have shifted significantly in recent years, suggesting that India might want to reconsider the benefits of close Russia ties.

Most glaringly, Russia and one of India's top rivals, China, now maintain a robust strategic partnership. Prior to Russia's invasion of Ukraine, President Vladimir Putin met with Chinese President Xi Jinping in Beijing for the opening ceremony of the Winter Olympics, and the two leaders underscored that their nations' friendship has “no limits.” In other words, New Delhi's good relationship with Moscow has not constrained Beijing in any measurable way. Indeed, starting in May 2020, China mobilized its military to force a standoff with India along their disputed land border high in the Himalayas, resulting in deadly clashes for the first time in decades. If anything, strengthening China-Russia relations may actually be emboldening Beijing toward more assertive action.

The geostrategic winds have shifted significantly in recent years, suggesting that India might want to reconsider the benefits of close Russia ties.

These ties have some inherent limits, starting with how Moscow has unwaveringly supported India's policy of settling the Kashmir dispute with Pakistan through bilateral channels. But Moscow will need to rely on countries that don't care about its newfound status as an international pariah—that means not only China, but Pakistan as well. In Pakistan, Khan's Moscow visit has been hailed by the ruling party for its anti-American flavor specifically because it coincided with Putin's decision to take on the West by invading Ukraine. Steady, if only incremental, improvement in Russia-Pakistan relations are likely to follow. Expect a return visit by Putin to Islamabad—which would make him the first-ever Russian leader to do so. That won't be welcomed in New Delhi.

Meanwhile, Russia, Pakistan, and China are regularly engaging with the Taliban in Afghanistan. Although India has met the Taliban as well, it is far more cautious and has legitimate concerns about Afghanistan becoming a safe haven from which Islamic terrorist organizations can launch attacks against India—perhaps with Pakistan's blessing. Russia is concerned about terrorist attacks too, but the fact that the Taliban are Islamic extremists bothers Moscow less than New Delhi. Rather, Russia seems intent on filling the security vacuum left by the United States, preferably with an authoritarian and anti-American regime. Hence, Moscow is likely to enhance ties to the Taliban with fewer qualms about terrorism, perhaps at India's expense.

India's close ties to Russia also are likely to become a liability with the United States, which has become the main counterweight for New Delhi as it competes against China.

Finally, Russia has become a major military supplier to Tatmadaw, the military junta in India's eastern neighbor Myanmar. Russian defense minister Sergei Shoigu visited Naypyidaw two weeks before the coup last February, and in June, he hosted Tatmadaw leader Min Aung Hlaing for talks in Moscow. New Delhi cannot be thrilled with Russian engagement of the Tatmadaw as its own restive eastern states that border Myanmar—including Arunachal Pradesh, Nagaland, Manipur, and Mizoram—tend to be sympathetic toward the Burmese people and could make India's headaches worse in these regions. Russian support also complements Chinese activities in Myanmar, strengthening Beijing's hand in yet another section of India's periphery.

India's close ties to Russia also are likely to become a liability with the United States, which has become the main counterweight for New Delhi as it competes against China. For example, India may be unable to avoid sanction under the Countering America's Adversaries Through Sanctions Act (CAATSA) if it continues to purchase Russian arms of a certain caliber. Whether bilaterally or through multilateral mechanisms, like the Quad (Australia, India, Japan, and the United States), India will be expected to act like a responsible great power seeking to uphold the rules-based international order. Looking the other way on Russian misbehavior—or worse, appearing to endorse it—would show that New Delhi is not a reliable like-minded democratic partner.

Derek Grossman is a senior defense analyst at the nonprofit, nonpartisan RAND Corporation and an adjunct professor at the University of Southern California.

This commentary originally appeared on Times of India on March 4, 2022. Commentary gives RAND researchers a platform to convey insights based on their professional expertise and often on their peer-reviewed research and analysis.