The Will to Fight, Lessons from Ukraine 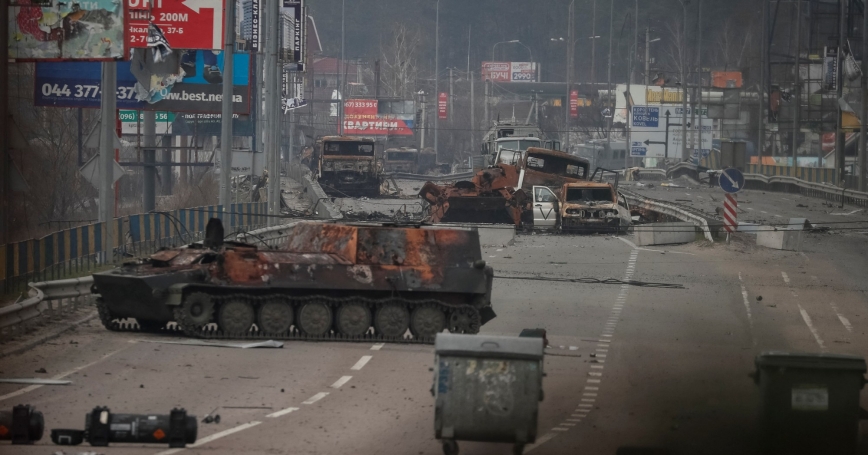 Wrecks of Russian military vehicles on the front line as Russia's invasion of Ukraine continues, near Kyiv, Ukraine, March 29, 2022

As late as November 2021, military analysts in the West estimated that invading Russian forces could overrun the capital of Ukraine in a matter of days. Over a month has passed since the invasion began—Kyiv stands. This is just the latest example of pre-war miscalculation, a flaw to which the United States is hardly immune.

Net assessments try to predict the outcomes of theoretical wars between different pairs of adversaries. They focus on the military capabilities and technologies—essentially manpower and weapons. Other factors are theoretically considered but harder to quantify. These include motivation; morale; the will to fight; the role of military and political leadership; and the individual decisions made by thousands of soldiers or an entire population.

As a 2018 RAND study noted, “[a]rguably, will to fight is the single most important factor in war.” Despite this, “the integration of will to fight concepts into military…assessments is glaringly sparse.” A collapse of morale can bring down an army faster than a virus. Stubborn courage can be equally infectious.

A collapse of morale can bring down an army faster than a virus. Stubborn courage can be equally infectious.

These miscalculations may reflect continued reliance on measuring manpower and materiel, which do often prevail in military contests. The will to fight and a nation's determination to persevere resist the kind of measurement pragmatic managers prefer, so they tend to be set aside.

In Ukraine, ferocious defense has stalled the invaders, forcing them to resort to massive, indiscriminate bombing and shelling of civilian targets in an effort to pound the country into submission. Even if Kyiv falls, continued resistance seems likely.

In recent testimony before the Senate, top U.S. intelligence officials admitted that they underestimated the Ukrainians' will to fight—a mirror image of the misjudgment in Afghanistan in which Pentagon analysts estimated that the Afghan government could hold out against the Taliban for as long as two years if all U.S. ground forces were withdrawn. Reportedly, that estimate was revised downward in June 2021—Afghanistan's military collapse could come in six to 12 months. The Afghan government fell in 11 days.

This is something American analysts and their counterparts around the world regularly get wrong. American planners also underestimated the determination of the Taliban and the resistance in Iraq.

During the Vietnam War, based upon interviews with Viet Cong prisoners and defectors, analysts at the RAND Corporation overestimated the impact of U.S. military operations—in particular, air power—on Viet Cong motivation and morale. Not all RAND analysts agreed. Taking a contrary position, one author concluded that the Viet Cong as a group and man-for-man “seems unlikely to yield, let alone disintegrate, under the type of pressure the United States can apply…The thought of compromise in the current struggle, even in return for concessions, seems alien to these men. They see the war entirely as one of defense of their country against the invading Americans.”

Putin's miscalculation in Ukraine is a more personal failure. Tyrants exercise supreme power over all aspects of life in their domains. They therefore often succumb to the delusion that they are supermen whose will has no limits. Surrounded by servile sycophants, their assessments are not questioned. There are no councils of war to raise different points of view. He who commands, commands. Failure is unacceptable, therefore unthinkable.

Determined defenders don't always win. Two hundred defenders of the Alamo held out against thousands of Mexican soldiers for 13 days. Poland fought for 27 days before surrendering to Nazi invaders. The Viet Cong defended their bastion in Hue for 32 days. German soldiers dug in at the Abbey of Monte Cassino in Italy and held out for four months—the battle resulted in the deaths of 55,000 Allied soldiers and 20,000 German casualties. During Spain's civil war, the siege of Madrid lasted two-and-half years.

The ultimate outcomes were in little doubt. The longer wars go on, however, the greater the possibility of surprises—unpredictable events that change the trajectory of the conflict or its long-term consequences.

Some Western analysts believed Ukrainians had little faith in their president, either as commander-in-chief of the armed forces, or as the head of his administration. Yet President Volodymyr Zelensky has proved to be a brave leader, inspiring people in Ukraine and abroad by his words and deeds. Had Zelensky folded and fled, Western protest would have been muted, and its material support minimal. Had the Ukrainian people been unwilling to fight, his exhortations would have been ineffectual. Instead, backed by Ukraine's heroic defense, Zelensky's pleas for military assistance are bringing help and have already led to unprecedented sanctions on Russia.

The isolation of Russia will adversely affect the entire world, but Russia will suffer greater damage.

Ukraine's valiant defense has sent waves of impact far beyond its own borders. It has galvanized the Western alliance. It may lead to a permanent restructuring of the global economy. The isolation of Russia will adversely affect the entire world, but Russia will suffer greater damage. As a result of Putin's ambition, aggravated by miscalculation, Russians are already poorer, isolated, and more oppressed.

The Ukrainians, like many of us, may not be paragons of morality. But these brave people have reminded the world that national unity in the face of existential threats, self-reliance strengthened by collective defense, and courage coupled with compassion can help underdog populations resist the mightiest military forces. This is a lesson military planners would be wise to consider.

This commentary originally appeared on RealClearWorld on March 28, 2022. Commentary gives RAND researchers a platform to convey insights based on their professional expertise and often on their peer-reviewed research and analysis.