What the Media Might Have Missed About South Korea's Elections 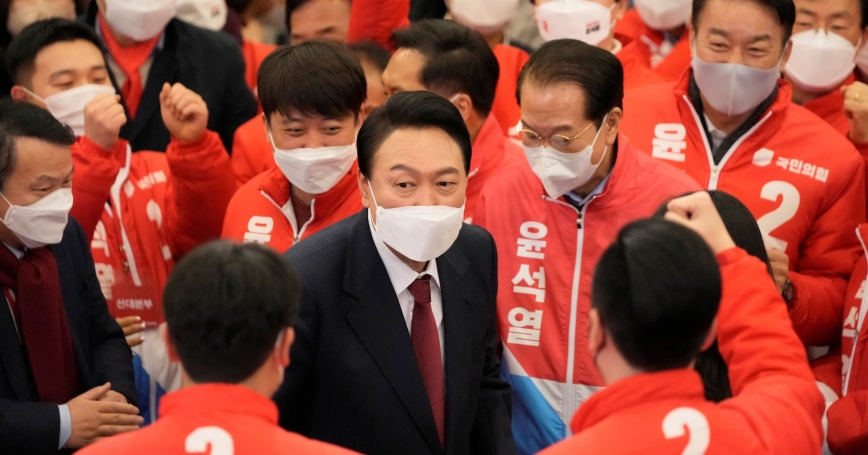 In January, Yoon Seok-yeol, now South Korea's president-elect, posted a single phrase to Facebook: “Abolition of the Ministry of Gender Equality and Family.” No explanation was added, though Yoon and fellow members of his People's Power Party (PPP) have for months advocated for the elimination of the ministry.

Within days, news media in Korea had reported on the post and conducted opinion polls about it. The Korea Herald, for example, announced that half of respondents agree with Yoon, in a piece subtitled, “Pledge to abolish gender ministry reignites debate.” Reporters within the country and abroad have trumpeted Yoon's post as indicative of a trend: that a large portion of the South Korean electorate openly opposes gender equality, and that the country's gender debate was informing the election.

But such reports may, in fact, be getting the story backwards. Could it be that, instead of the election reflecting a social divide, certain politicians are turning a social divide into an electoral strategy? Unfortunately, it could. And this same political strategy could also be effectively distorting a much-needed and difficult conversation about gender in South Korean society. This mode of politics—in which a leading figure relies on the media to amplify marginal views and foster division—should be all too familiar to Western observers.

And yet, by missing this distinction, Western media are playing into politicians' hands and amplifying the narrative. Take, for example, the reports on Yoon's Facebook post. South Korea does not even technically have a ministry of “gender equality.” The Korean name for the ministry translates directly as the Ministry of Women and Family. A Korean man expressing frustration with the ministry is not necessarily opposing “gender equality” as a value or aspiration. Maybe, in fact, he is objecting to the coupling of “women's issues” and “family” under the banner of a single government department. (Indeed, Yoon's foremost opponent in the election had called for the ministry to be renamed for this very purpose.) Foreign media reports, like the domestic politicians whose narrative they are repeating, have tended to skip over this more nuanced fact.

Turning a social divide into an electoral strategy could be effectively distorting a much-needed and difficult conversation about gender in South Korean society.

Still, it must be said that in Korean society today, anti-feminist slogans are resonating with some. Younger voters in South Korea are increasingly frustrated with the perceived lack of opportunities for building a good life. In a society that has had high social mobility and relatively low income inequality, the feeling of being stuck has prompted a search for ways of understanding what has happened. While that energy has largely translated into support for hopeful new visions for the future, now some Koreans have run out of patience. As commentator S. Nathan Park has noted, a historically high youth unemployment rate, combined with a sense of cultural entitlement, has fostered a generation of young men frustrated by their inability to emulate their fathers. Some of these young men have chosen to lash out at women. In the presidential election on March 9, we learned that Yoon's gambit of mobilizing anti-feminist hate had earned him the highest office.

Like so many very loud, extremely visible movements throughout the world, South Korea's anti-feminists got their start in a far-right movement on the fringes of politics. Far-right and anti-feminist rallies are much smaller in scale than the massive, peaceful demonstrations for other causes that the country has seen so often. They pale in comparison with the Candlelight Movement of 2016–17, focused on holding then-President Park Geun-hye to account for misuse of power, or rallies in 2019 to demand reform of the prosecutorial authority. Yoon's criticism of the ministry attempts a strange rhetorical twist that is buttressed by media coverage. Yoon and the PPP accuse the ministry of pursuing a “feminist” agenda, as if—and this point is the key—that were a bad thing, treating feminism as a dirty word. It baits opponents into distancing themselves from feminism. The move is less a position in a debate than an attempt to alter the framing of debate. The effort leads to bizarre public claims, such as an opinion piece that defends calls for elimination of the ministry by pointing out that the ministry “is not [meant to be] an agency teaching people about feminism.”

For all the noise generated by anti-feminist groups, their claims are not a relevant part of the gender debate in South Korea. Restructuring a ministry seems a relatively minor matter when viewed against the backdrop of gender issues such as sexual violence, workplace discrimination, and inequalities within families. The tragedy of the magnification of such extremist views is that it pushes aside more-nuanced discussion of gender relations and gender equity.

For all the noise generated by anti-feminist groups, their claims are not a relevant part of the gender debate in South Korea.

South Korea is a society that modernized while gender roles remained divided. Women now achieve education levels on par with men, but men and women continue to have drastically different relationships to work and family. Opportunities for women to build careers are far fewer than the level of education might suggest. Parts of the legal system, such as the short prison terms for sexual violence and harassment, also accentuate rather than temper the vulnerability of women. Compulsory military service for men, interpreted either as burden or privilege, compounds gender role differences.

The toxicity of the anti-feminist discourse does not accurately reflect the gender-related tensions and problems that most Koreans currently face. The obstacles to improving gender equity are more mundane and more ubiquitous than the hyperbole of anti-feminism suggests: the manager who insinuates that a woman coworker's impending marriage will make promotion difficult; the senior colleague who forces junior male colleagues to socialize excessively after work and avoid home duties; the mother-in-law who pulls out tropes of domesticity and motherhood to pressure her son's wife to give up a career or personal aspirations. In real life, as most Koreans know, these systemic economic, workforce, cultural, and even legal barriers are the greater impediments to progress. Not a Facebook post. Not even the name of a ministry. Those distract from the real work towards progress.