A Greater Focus On Harm Reduction Will Save Lives 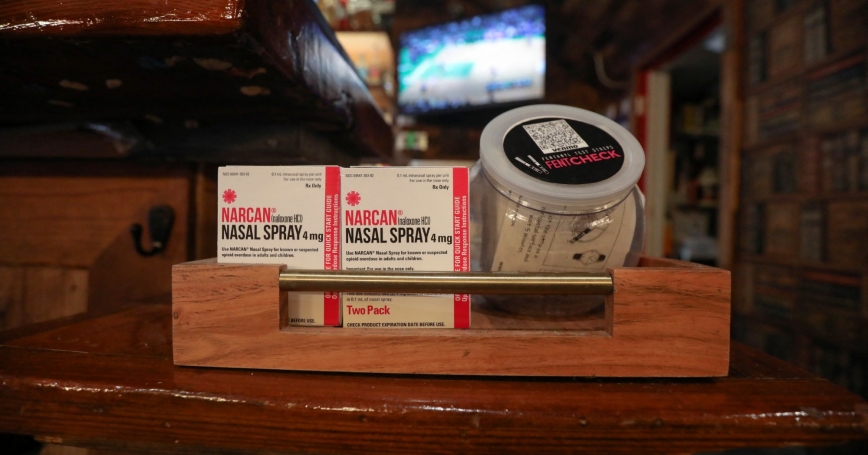 Boxes of naloxone spray and fentanyl test strips in a container at The Legionnaire bar in Oakland, California, March 3, 2022

During his State of the Union address, President Joe Biden emphasized the need to increase funding for harm reduction related to drug use. This declaration was a historic first for federal drug policy, and one that is necessary to address a worsening overdose crisis. For decades, elected officials brushed off harm reduction as a viable option for reducing the harms of drug use over concerns of enabling drug consumption. But now, these strategies are front and center, spoken aloud, from the largest podium in the land, and during prime time. More recently, the Office of National Drug Control Policy released its national drug strategy, which follows on President Biden's call to action by including harm reduction efforts. What caused this historic about-face?

Since 2014, the United States has seen an unprecedented rise in drug overdose deaths. In 2021 alone, approximately 100,000 Americans died from a drug overdose—double the number reported in 2015 (PDF). The reason for the surge in death is not so much that more Americans are using drugs but that the supply of drugs in illegal street markets is becoming increasingly toxic. Dealers and traffickers introduced illegally manufactured fentanyl into the market, initially concealing it as heroin, and eventually pressing it into tablets (PDF) made to look like genuine prescription medication. Fentanyl is a cheap and potent synthetic alternative to heroin; perhaps as little as a milligram or two of fentanyl could substitute for 50 milligrams of heroin. Dealers who seek to cut down on costs and the risk of arrest prefer to transact in fentanyl over heroin—it's simply cheaper and easier to transport and conceal because it's so much more potent. Perhaps as little as a pickup truck's worth of pure fentanyl could satisfy America's annual consumption. Use of street-sourced drugs has always been risky, but today's level of risk is simply unprecedented. Illegal drug dealers are not pharmacists. They are both unable and unwilling to measure out consistent doses of fentanyl so as to avoid killing their customers. Furthermore, they often sell fentanyl as something else—high-quality heroin or diverted medication (PDF)—concealing their wares with deadly results.

Perhaps as little as a pickup truck's worth of pure fentanyl could satisfy America's annual consumption.

Many traditional drug policy goals have focused on raising the price of illegal drugs through seizures, reducing the demand for drugs through prevention programs, or promoting treatment to get those that use drugs into rehabilitation. In all cases, the focus has been about shrinking the population of drug users either indirectly, by reducing their consumption through elevated prices, or directly, by transitioning users into drug treatment programs. While these interventions have worked to some degree in the past, they are increasingly limited by the greater lethality of today's street drugs. For example, some who are overdosing on highly potent fentanyl (consuming it as a fake tablet, say) might not even suffer from a substance use disorder, and thus would not benefit from drug treatment. Additionally, those who would benefit from treatment can't do so if they suddenly die from mistakenly consuming fentanyl that is concealed in heroin or cocaine. Although drug supply and demand reduction efforts are necessary, they alone are now insufficient to stem rising overdoses.

The illegal drug market is more dangerous than it ever has been, and new strategic approaches are required. The joint legislative and executive branch Commission on Combating Synthetic Opioid Trafficking was convened to address these very issues. Among other recommendations to improve our country's capacity to stem the flow of these illicit synthetic drugs into our borders, the commission's report includes actions that promote and explore overdose prevention efforts that are in the spirit of harm reduction.

There is some movement toward expanding harm reduction efforts in the United States, however. Many states and localities are increasing access to naloxone, the overdose reversal agent. Although this form of harm reduction has saved lives, it cannot prevent an overdose, only reverse it after the fact.

Getting naloxone into the hands of those who need it can help reverse opioid overdoses. But this alone may not be enough. In Vancouver, Canada, trained staff are supervising drug consumption and distributing prescription-grade alternatives to those who have received methadone treatment but are still using street-sourced heroin. These and other interventions have so far not been approved in the United States but warrant further consideration as recommended by the commission's report.

Another way of reducing the harm caused by more-potent drugs is to give consumers more knowledge of what they are taking. This includes drug content testing, such as the use of inexpensive test strips to detect fentanyl that might be concealed in powder drugs such as cocaine or heroin.

Apart from supervising consumption and offering other possible therapies (for example, additional medications to treat opioid use disorder) and tools (for example, test strips), changing the messaging around drug use is increasingly important. Such messaging could raise awareness of the presence of fentanyl in the drug supply, which in turn could encourage individuals to consume street-sourced drugs with a trusted friend or use with naloxone at hand. Messaging might also better describe the means to dose more cautiously or slowly, which also might help reduce the risks of a fatal overdose. These efforts can help empower individuals that use drugs to avoid an overdose death.

To stem our rising overdose crisis, we must allow for innovations in reducing the harm these drugs can cause.

While reducing the population of those who consume street-sourced drugs is critical, an increased focus on reducing the ever-growing lethality of such drugs is urgently necessary. To stem our rising overdose crisis, we must allow for innovations in reducing the harm these drugs can cause. This will require cooperation and coordination across all levels of government, as well as with nongovernmental organizations. Drug overdoses happen locally, necessitating a local response from the community. However, the federal government plays an equally important role in studying, improving, and disseminating good practices and findings, as well as funding other innovative research efforts such as drug content testing or national early warning systems that can alert communities about the emergence of more-potent opioids in the illegal market. Pairing the bottom-up innovation with top-down resources is necessary to improve harm reduction efforts that can save lives.

Bryce Pardo is associate director of the RAND Drug Policy Research Center at the nonprofit, nonpartisan RAND Corporation; David Luckey is a senior international and defense researcher at RAND and a professor of policy analysis at the Pardee RAND Graduate School. Both served on the staff of the Commission on Combatting Synthetic Opioid Trafficking.