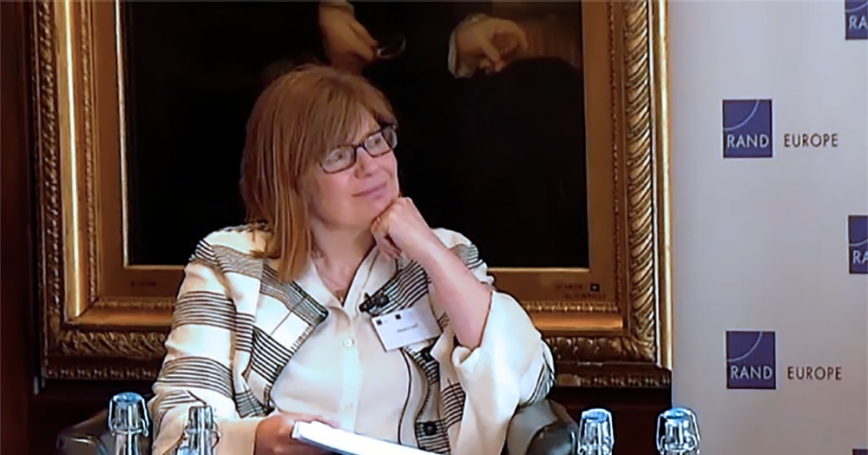 Jessica Cecil listens as Mark Thompson speaks at the RAND Europe Council of Advisors meeting in London, UK, May 6, 2022

For Jessica Cecil, today feels a bit like the Dark Ages after the fall of the Roman Empire, in which agreed-upon facts endure in only a few isolated places of elite discussion and there is no common language of politics.

Cecil, founder and former head of the Trusted News Initiative, a global alliance of major tech platforms and leading news organizations like the BBC, says the conflict in Ukraine has decisively established disinformation as a tool of warfare. And the West is fighting back, with considerable counterdisinformation firepower pointed at Russia and China as well as at home-grown targets such as the QAnon conspiracy in the United States.

But, Cecil asked at a RAND Europe event in London: “Are our guns all pointing in the right direction? Who, for instance, actually consumes disinformation? Are they the ill-informed who are different from—and perhaps patronized by—the better-educated?”

Cecil's take is that far from being passive or ignorant, consumers of disinformation tend to be more, rather than less, likely to be politically engaged. They often have more than an average education. It is simply that they are cynical about those elites who claim to know best.

For now, says Cecil, a Trustee of Bristol University and a member of RAND Europe's Council of Advisors, the West has failed to develop a coherent response.

She notes that in the United States, the announcement of a Disinformation Governance Board has been condemned as dangerous and un-American by a U.S. senator. In Britain, the government's Online Safety Bill, which seeks to define in law that tech companies should deal with “legal but harmful” content on their platforms, has run into controversies about free speech. At the same time, free-speech absolutist Elon Musk is seeking to buy Twitter and take the company private, with many complex implications.

In this context, Cecil says, it is unwise to think of disinformation as merely a “food safety”–type problem, where labelling a social media post “true” or “false” will do. Nor is it akin to protecting the sheep from the wolves.

Combatting disinformation requires supporting and bolstering the notion of trust and trusted sources.

“Combatting disinformation requires supporting and bolstering the notion of trust and trusted sources,” Cecil says. “Legislation can play a part, as we are seeing in Washington and London. The EU has just passed its Digital Services Act to tackle disinformation. But as promising as legislative approaches may seem, the uncomfortable truth is that governments are too often part of the problem—even ones who really should know better.”

As an example, Cecil cites how French President Emmanuel Macron in January 2021 described the AstraZeneca vaccine as “quasi-ineffective” for people over age 65. That baseless claim came hours before the EU was due to approve that jab for all adults in the EU. But at the same time the French and British leaders were playing out their differences over Brexit through their respective records on fighting COVID-19. Two months later the AZ jab was approved in France for all adults.

“But by then the damage was done,” Cecil says. “People were deeply suspicious. Shots went unused. The vaccine drive stuttered.”

If governments and legislation are likely only to be part of the solution, another weapon may be protecting independent journalism, Cecil says. In many parts of the world that could mean giving grants to media outlets whose business models are failing—such is the remit of the new International Fund for Public Interest Media, chaired by Mark Thompson, who also spoke at the RAND Europe event.

Cecil describes a role for a structured coalition of global tech companies, news organizations, and relevant civil society groups to define and agree upon the most dangerous categories of disinformation. That could enable evolving disinformation stories to be identified and tracked under a fast-alert system that might blunt the most toxic examples before they do serious harm. This approach builds on the framework of the Trusted News Initiative.

“Though an expanded approach would need funding and commitment, the opportunity and need to work together on this issue have been clearly shown,” Cecil says. “The frightening reality is that the defense of democratic values is at stake. From the policymakers and stakeholders to anyone sharing information online, we have to get this right.”