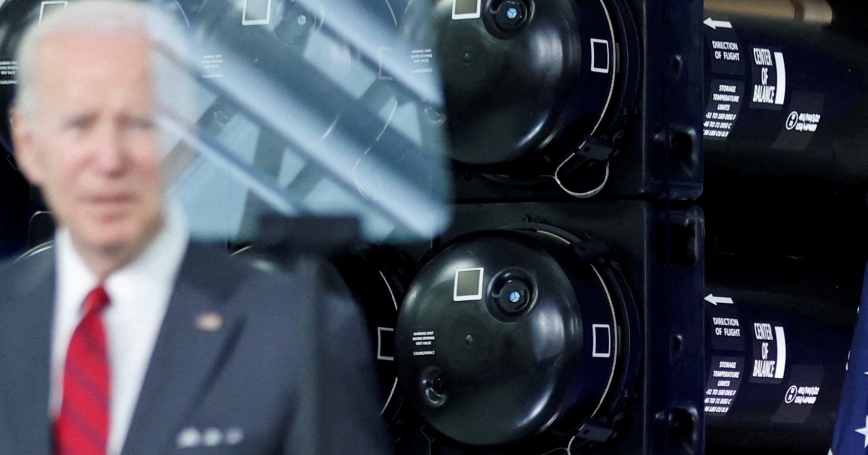 If there is a dangerously over-used phrase of the last two months, it is “world war.” The Biden administration frequently talks about it. Republican congressional leaders have warned about it, too. And the United States' European allies—from French President Emmanuel Macron to, most recently, German Chancellor Olaf Scholz—have voiced their concerns at a similar scale.

The Russian side, for its part, has used the term even more prolifically—describing everything from sanctions to the provision of weapons to the sinking of their cruiser Moskva in such global terms. And to add teeth to their threats, Russians have coupled their “world war” language with nuclear saber-rattling, missile testing, and conducting nuclear drills.

In theory, this talk of sparking a worldwide conflict is designed to encourage caution and more-prudent policymaking. The fears of global nuclear annihilation should have produced a concerted effort by all sides to keep the Ukraine conflict limited. In practice, however, the focus on escalation—rather than ensuring Russia's defeat—has had the opposite effect: It created a last-minute scramble to push assistance to Ukraine and made the international security picture more precarious.

The United States and its allies tried to prevent world war through self-imposed limits on their support to Ukraine. When Russia first invaded in 2014, the Obama administration drew a line between lethal and nonlethal military aid. During this more-recent conflict, the Biden administration argued first that the United States would provide only “defensive” rather than “offensive” weapons.

No matter how this current conflict turns out, Ukraine on its own is highly unlikely to ever pose a serious threat to Russia in the future.

Much of this blurring and boundary crossing has to do with Russia's actions—or, more specifically, the U.S. response to those actions. The West's self-restraint has never been reciprocated. Russia only backed off its attempts to seize Kyiv and topple the regime when it was defeated on the battlefield with the help of Western military aid. At the same time, mounting Russian atrocities have increased public pressure on Western governments to act more aggressively to end the conflict.

All the while, many of the now-ignored escalation limits lacked analytical grounding. In particular, the focus on defensive, not offensive weapons never made much sense. After all, Russia attacked Ukraine, not vice versa; therefore, any weapons the West provides to Ukraine could be deemed defensive. Moreover, Ukraine has less than half the population, an eleventh of the GDP, and one-28th Russia's landmass. Consequently, no matter how this current conflict turns out, Ukraine on its own is highly unlikely to ever pose a serious threat to Russia in the future.

Above all, there is no such thing as an “offensive” versus a “defensive” weapon. British Prime Minister Winston Churchill understood that all weapons can be either defensive or offensive tools. It simply depends on how they are used. Once, during the interwar period, before he was prime minister, Churchill highlighted the absurdity of such definitions, saying that “apparently, the machine gun, which was the German weapon for holding on to 1.3 provinces of France, is to be the virtuous, defensive machine gun, and the tank, which was the means by which these lives were saved, is to be placed again under the censure and obloquy of all just and righteous men.”

Still, imposing these arbitrary boundaries has already had two real-world effects. First, it has slowed Western aid to Ukraine. It took years and a change of administration for the United States to approve lethal aid to Ukraine. More recently, in March, the United States vetoed a Polish plan to deliver MiG-29 fighter aircraft to Poland, citing escalation concerns. Only a few weeks later, in April, the United States provided spare aircraft parts to Ukraine to keep more Ukrainian aircraft airborne. The MiG-29 incident is not a one-off example. The United States has reversed course on a range of other weapons systems. In an active conflict, however, every day counts, and as Chairman of the Joint Chief of Staff General Mark Milley stated, “Time is not on Ukraine's side.”

As the West blows through so many imagined boundaries, it may accidentally trip over a real one. At some point, there is a line where Russia might decide to make good on its nuclear threats.

From a strategic perspective, there is a second, and potentially even more dangerous, consequence to the evolving policies on military aid: As the West blows through so many imagined boundaries, it may accidentally trip over a real one. At some point, there is a line (even if we have not found it yet) where Russia might decide to make good on its nuclear threats. As the number of self-imposed redlines crossed with only limited consequences grows, however, it could be easy to be lulled into a false sense that such a threshold does not actually exist.

In this respect, Russia has not done itself any favors. By threatening nuclear use at every turn, Russia runs the risk of becoming the boy-who-cried-wolf, making the West become numb to such threats, and unable to distinguish between Russia's actual versus its rhetorical red lines.

Secretary of Defense Lloyd Austin recently argued that one of the United States' objectives in Ukraine is to “see Russia weakened to the degree that it can't do the kinds of things that it has done in invading Ukraine.” The remarks were controversial—but, arguably, strategically sound. The strategy of limiting assistance in hopes that Russia will follow suit has failed to produce de-escalation; it has made the true tripwires murkier.

Ultimately, the best strategy to prevent a future world war may not be to focus on managing escalation but, instead, on Russia's defeat in the current conflict.

Raphael S. Cohen is director of the Strategy and Doctrine Program, Project AIR FORCE at the nonpartisan, nonprofit RAND Corporation.

This commentary originally appeared on The Hill on May 6, 2022. Commentary gives RAND researchers a platform to convey insights based on their professional expertise and often on their peer-reviewed research and analysis.