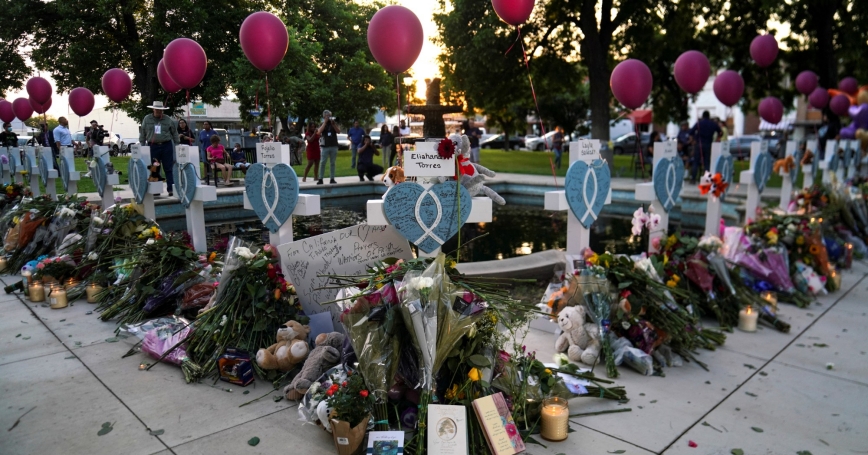 Memorial crosses for the victims of the mass shooting at Robb Elementary School in Uvalde, Texas, May 26, 2022

Part of the deeply polarized debate over guns in the United States—inflamed, yet again, by the horrific events in Uvalde, Texas—is ideological. A segment of the population rejects any and all regulation of these weapons as an abridgment of freedom; another segment holds uncompromising anti-gun views. But some of the arguments about how best to prevent gun violence boil down to disagreements about the real-world effects of policies that have been proposed or implemented. Are certain laws and regulations likely to improve or worsen public safety? These disagreements involve empirical questions that can be answered with good research. At a time when many Americans are searching for solutions to our country's intolerably high rates of gun violence, social scientists can help provide answers—and, possibly, lead people of good faith to modify their views.

For more than six years, the RAND Corporation, through its Gun Policy in America initiative, has been evaluating the available scientific evidence on the effects of gun laws on a wide range of outcomes, including homicides, suicides, and mass shootings. We have reviewed thousands of scientific articles to identify those that credibly estimate the effects of 18 different gun laws that are commonly debated in state legislatures. In particular, we have looked for evidence that these laws caused changes in one of the outcomes of interest—not just that they are correlated with these outcomes (because mere correlation is poor evidence of causation). Several policies, we find, do have substantial support in the scholarly literature—with child access prevention legislation, also known as CAP laws, or safe storage laws, boasting some of the most potent evidence about effectiveness. Studies make clear that CAP laws decrease self-injuries and suicides among youths in states that adopt them, and also decrease unintentional injuries and deaths. Yet only 19 states have such laws.

Some of the arguments about how best to prevent gun violence boil down to disagreements about the real-world effects of policies that have been proposed or implemented.

Policies requiring firearms owners to keep guns in safes or other places where children can't access them would not have changed events in Uvalde, but they deserve strong consideration by any legislators concerned about gun deaths. It's an unfortunate fact that mass shootings are sufficiently rare that it is hard to establish with scientific rigor whether policies affect them—although some laws that reduce gun violence in general may also reduce mass shootings.

Of course, we should not expect to implement laws only for which we have strong scientific evidence. Often—usually—no such evidence is available. Even when it is, failure to find a statistically significant effect does not mean the law has no effect: It usually means the study wasn't strong enough to say what the law's effects might be. When no rigorous evidence of law effects is available, policymakers and the public instead must rely on logical considerations (for example, is it plausible that restrictions on magazine capacity might reduce the carnage mass shooters cause?) and weaker evidence (such as correlations).

The results of RAND's regularly updated and ongoing review of evidence might be, at first glance, underwhelming: Most of the gun policy effects for which we sought evidence have not been evaluated or haven't been evaluated well enough to draw strong conclusions from. The two problems—weak studies or no studies—are related: For decades, we in the United States have underfunded research and data collection efforts that could help us establish the effects of gun laws and other firearm violence prevention interventions. (In fact, for nearly a quarter-century, almost no federal funding was available for research in this area, for political reasons.)

As mentioned, where positive effects are concerned, child access prevention laws have the strongest evidence in their favor. (According to the Centers for Disease Control and Prevention, 842 children younger than 18 died in firearms accidents or firearms suicides in 2020, and a larger number were injured, though some of these casualties were at the hands of older people.) Meanwhile, the research is similarly persuasive that “Stand your ground” laws are associated with an increase in firearm homicides, and there is moderate evidence suggesting they also drive up total homicides after their passage. “Stand your ground” laws remove the traditional obligation to avoid using deadly force in a conflict if retreat is a safe option. Such laws have been popular in recent years, and by now more than half of all states have implemented them.

There is less robust, but still notable, evidence for the effects of other laws. Since the mid-1990s, all states have required background checks for firearms purchased from a licensed dealer. There is mounting evidence that these checks decrease homicides. Although almost half of U.S. states have some form of “universal” background check laws, which that also require checks for sales between private parties, the effects of these laws are not yet well established. There is also moderately strong evidence that waiting period laws (found in fewer than half of all states) decrease firearm suicides and homicides, and that laws prohibiting firearms possession by people with domestic-violence restraining orders—variants of which are present in most state laws—decrease intimate-partner homicides.

For decades, we in the United States have underfunded research and data collection efforts that could help us establish the effects of gun laws and other firearm violence prevention interventions.

Other policies—such as assault weapons bans of the sort the United States had in place for the 10 years after 1994—don't yet provide enough scientific evidence to indicate what their effects might be. That is not to say that these laws do not have effects, only that they have not been rigorously demonstrated. By some definitions, for example, mass shootings declined in the United States during the period of the federal ban, but because mass shootings remain, at least in a statistical sense, relatively rare, and because rates of mass shootings are highly variable from year to year, there are methodological challenges to reliably detecting even fairly strong effects for these laws.

Some people who argue about guns are simply never going to be swayed by scientific evidence regarding firearms policies, but many citizens and lawmakers are willing to take sound evidence into consideration. We have extraordinary levels of firearms violence in this country—but also research-proven ways to reduce it.

Andrew R. Morral is a senior behavioral scientist at the nonprofit, nonpartisan RAND Corporation and leader of its Gun Policy in America initiative.

This commentary originally appeared on The Washington Post on May 27, 2022. Commentary gives RAND researchers a platform to convey insights based on their professional expertise and often on their peer-reviewed research and analysis.