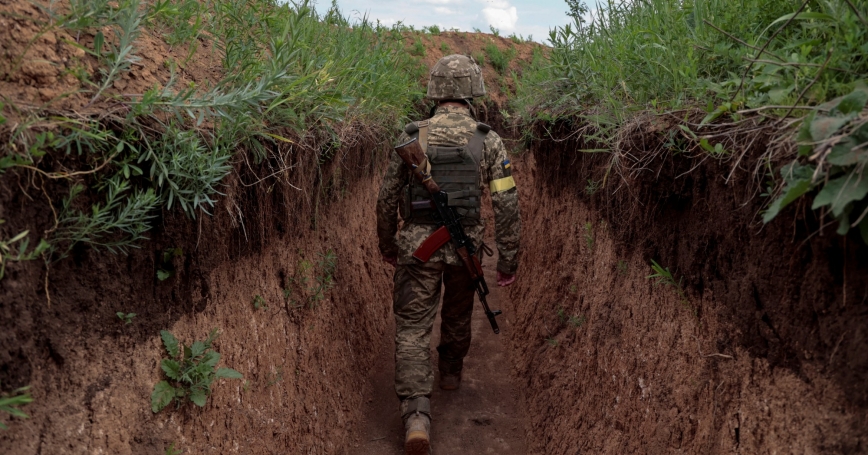 A Ukrainian service member walks in a trench near the front line in the Donetsk Region, Ukraine, May 29, 2022

At this stage of the war in Ukraine, as Russia steps up its offensive in the Donbas and more revelations of the atrocities committed by its forces emerge, the prospect of any kind of negotiated peace between Moscow and Kyiv seems remote. Even earlier this spring, when delegations from the two sides were meeting, the talks had little impact on either Russia's or Ukraine's determination to keep fighting. And at times, both Ukrainian President Volodymyr Zelenskyy and Russian President Vladimir Putin have been dismissive of the negotiations. Today, the sides have effectively suspended their diplomatic efforts.

Amid the gloom, it would be easy to forget the real progress that negotiators have already made. In late March, Ukrainian diplomats introduced an innovative framework for a deal that could provide a pathway out of the war. And crucially, the proposal, which was leaked to the press following talks in Istanbul on March 29, has already received at least preliminary support from both sides. At the center of the proposed deal is a trade: Kyiv would renounce its ambitions to join NATO and embrace permanent neutrality in return for receiving security guarantees from both its Western partners and from Russia.

Perhaps because of its novelty, the significance of the Istanbul proposal has yet to be appreciated in many Western capitals, where security guarantees have become synonymous with treaties of alliance.…

This commentary originally appeared on Foreign Affairs on June 1, 2022. Commentary gives RAND researchers a platform to convey insights based on their professional expertise and often on their peer-reviewed research and analysis.