War of the Worlds: How Cognitive Dissonance and Repression Shape Russian Perceptions of the Conflict in Ukraine 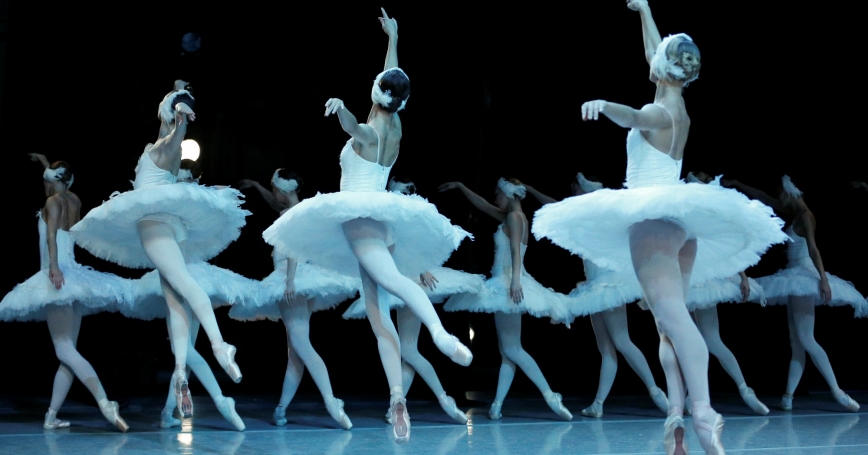 I first learned about Radio Day, a Soviet-era holiday, during a childhood visit to my grandparents' apartment in Chicago's Ukrainian Village. It was May 7, and my grandparents' friend joined us for tea. Perched at the table, I overheard their friend remark, “In the old country we'd be celebrating the Russian invention of the radio today.” Thinking nothing of it, my parents casually retorted, “What a farce. We all know the Italians invented the radio.”

The woman was visibly confused. Beginning in 1945, the USSR commemorated the date in 1895 when Russian scientist Alexander Stepanovich Popov presented a paper unveiling his radio receiver device. “No, no, it was the Russians,” she insisted and a spirited debate erupted.

It being the pre-internet era, my grandfather hurried over to the bookshelf that held his personal reference library, carefully selecting the appropriate encyclopedia volume. He leafed through its pages to the entry for “Radio (broadcasting).” Reading aloud, my grandfather revealed that while Popov had in fact published a paper about his receiver device, it was the Italian, Guglielmo Marconi, who first built a wireless device capable of receiving and transmitting radio messages—what we now commonly refer to as a radio—beating Popov by a year and a half.

My grandparents' friend was flummoxed. There had been no mention of Marconi behind the Iron Curtain. The expression on her face as her internal gears groaned under the weight of this new contradictory information has stuck with me all these years later. Trying to reconcile the reality she'd known with the facts laid out before her, her visage seemed to say, “What else that I've known as truth is a lie?”

Cognitive dissonance theory posits that people experience psychological discomfort when two cognitions (or things they understand, or think they do) or a cognition and behavior, are at odds.

Social psychology has a name for this inner turmoil: cognitive dissonance. First introduced by Leon Festinger in 1957, cognitive dissonance theory posits that people experience psychological discomfort when two cognitions (or things they understand, or think they do) or a cognition and behavior, are at odds. According to Festinger, the unpleasantness caused by this dissonance motivates people to reduce it and achieve consonance, or consistency.

Cognitive dissonance theory offers a compelling explanation for one of the confounding phenomena emerging from the war in Ukraine—Russians who refuse to believe their Ukrainian family members' lived experiences of the war. Even when presented with evidence discrediting the Kremlin's rendition of events, be it videos of apartment bombings or Russian troops shooting at civilians, some Russians have reportedly dismissed it as fake. This raises the question, how is it that of the two cognitions Russians are wrestling with, the Kremlin's manufactured truth often prevails?

For Russians steeped in the Kremlin's portrayal of the war, conversations with family and friends in Ukraine appear to induce the clashing of two opposing realities.

Festinger's classic example of cognitive dissonance is that of a habitual smoker. When the smoker learns that their chosen behavior—that is, smoking—can lead to death, they experience dissonance. In order to attenuate the unease and harmonize their actions and this information, the smoker either modifies their behavior (in this case quits smoking) or reframes their conception of the harmful effects of smoking. They might convince themselves smoking has other net benefits, such as weight loss. Or, the smoker might rationalize: Their uncle lived to a ripe old age while smoking a pack a day, why shouldn't they? Few individuals, Festinger found, would sit with the discomfort and simply acknowledge the irrationality of their behavior in the face of this information.

In Russia, cognitive dissonance offers an insightful lens through which to view Russian denials of the Ukrainian experience. According to reports, some Russians have denied that Russian troops target civilians in Ukraine. Others have refused to acknowledge their country's initiation of the war altogether. Even in the comfort of private conversations among family members, many Russians reportedly parrot the prevailing Kremlin narrative that any hostilities are exclusively aimed at the Nazi authorities responsible for oppressing Russophones in Ukraine.

For Russians steeped in the Kremlin's portrayal of the war, conversations with family and friends in Ukraine appear to induce the clashing of two opposing realities.

Here too, cognitive dissonance scholarship offers insight. According to Festinger's protégé Elliot Aronson and social psychologist Carol Tavris, experiments have demonstrated that “when people feel a strong connection to a political party, leader, ideology, or belief they are more likely to let that allegiance do their thinking for them and distort or ignore the evidence that challenges those loyalties.” If opinion polls are any indication of authentic attitudes in Russia—a premise which is the subject of much debate (PDF) among experts (PDF)—Russians' allegiance to President Vladimir Putin and the system he has constructed is strong, and possibly deepening. Surveys conducted by the independent Levada Center indicate Putin's approval ratings jumped nearly 10 percent following the invasion, though self-censorship certainly could have influenced the polling outcomes.

Putin's inner circle has worked to develop a cult of personality around the leader, branding him as the protector of, and provider for, all Slavs. From his carefully choreographed annual call-in show to his infamous photo portraits (often shirtless) in rugged landscapes, Putin is presented as oozing with machismo and mystique. What is more, the narratives tie his existence to the core of Russian national identity. For instance, at the 2014 iteration of the annual Valdai Discussion Club (PDF), former deputy chief of staff of the Kremlin Vycheslav Volodin introduced his boss with the words “there is no Russia today if there is no Putin.” The implication: If you are a Russian, you are pro-Putin.

These narratives also tap into another strong force related to cognitive dissonance—one's self-concept. Festinger's protégé Aronson has theorized (PDF) that “dissonance is greatest and clearest when it involves … a cognition about the self and a piece of our behavior that violates that self-concept.” For those who have tied their own image as Russians to Putin, challenges to the president's decisionmaking—like family and friends in Ukraine sharing the atrocities they've experienced—could feel like a denunciation of their own character.

While some of these dynamics—fealty to and identification with a leader—can manifest in many contexts, the Kremlin has accelerated them by exercising control over the media outlets it already commanded, and by co-opting or stifling others. Since February 24, the state-operated media apparatus has mobilized to saturate Russia's information environment with the narrative that the war is an operation designed to spare Russia's Slavic brethren from fascist Ukrainian forces propped up by Western states.

At the same time, the Kremlin has unveiled more-repressive policies to further suppress public protest against the war, muzzle free speech, and hermetically seal off its public from external “alternative” narratives. News outlets independent of the Kremlin and its affiliates have been silenced or shuttered. Russian authorities have instituted new “fake news laws” to stifle opposition with the threat of 15 years in prison or steep fines.

There are likely Russians who are consciously or unconsciously self-censoring out of fear of reprisal.

In addition to these formalized mechanisms of repression, the Kremlin also uses thinly veiled intimidation tactics and blatant assassinations to silence journalists and opposition figures. Some, like experts on the Russian security services Andrei Soldatov and Irina Borogan, heeded the forewarning signaled by the very institutions they study—a notice attempting to foreshadow the death of their company's editor, Soldatov—and have since left Russia. Others like Alexei Navalny, Sergei Skripal, and Boris Nemtsov have suffered less-fortunate fates at the hands of the Kremlin. Recent rhetoric signaled the Kremlin's continued endorsement of these types of practices. In mid-March, for instance, Putin called for a “natural and necessary self-detoxification of society,” to root out “scum and traitors.” So in addition to those who have bought the Kremlin's story about Ukraine, there are likely other Russians who are consciously or unconsciously self-censoring out of fear of reprisal.

It would be misleading, however, to characterize all Russians in this light. In the first weeks of the conflict, Russians protested publicly, resulting in thousands of arrests. Reports of Russian military personnel defections have surfaced. More recently, subtler means of dissent have emerged. Images of “Swan Lake” ballerinas—alluding to the Soviet-era practice of televising the Tchaikovsky ballet after the death of a leader, a camouflaged call for a change in Kremlin leadership—have been spotted around Moscow. Others report posting artwork to their social media feeds featuring blue and yellow, the colors of the Ukrainian flag. Concertgoers have erupted into anti-war chants at major Russian rock concerts. One Russian artist replaced the price tags on supermarket shelves with snippets of news about Russia's role in targeting civilians. These are but some of the many surreptitious means of protest that have emerged.

Likewise, the number of VPN downloads by Russians has catapulted by more than 2,500 percent since the invasion of Ukraine. And before it was blocked by Russian censors, the BBC's Russian language news website more than tripled its average audience. Both signal a healthy appetite among the Russian public for non–Kremlin-sponsored reporting.

The proliferation of smartphones and internet access has no doubt broadened the aperture of non–Kremlin-approved information—but Russian authorities are continuously devising ways to construct new barricades. The West shouldn't forsake those Russians behind the so-called digital Iron Curtain who are frustrated, receptive, and curious about the war in Ukraine. For the segment of the Russian public that is firmly entrenched in the reality propagated by Kremlin narratives, independent reporting on the conflict may well fall on deaf ears, if it reaches them at all. Still, there could be those, like my grandparents' friend, whose exposure to new narratives initially sounds an alarm, but ultimately sparks a profound revelation.

Alyssa Demus is an international/defense researcher at the nonprofit RAND Corporation.

This commentary originally appeared on InkStick on June 27, 2022. Commentary gives RAND researchers a platform to convey insights based on their professional expertise and often on their peer-reviewed research and analysis.