What Better Way to Use the Arsenal of Democracy? 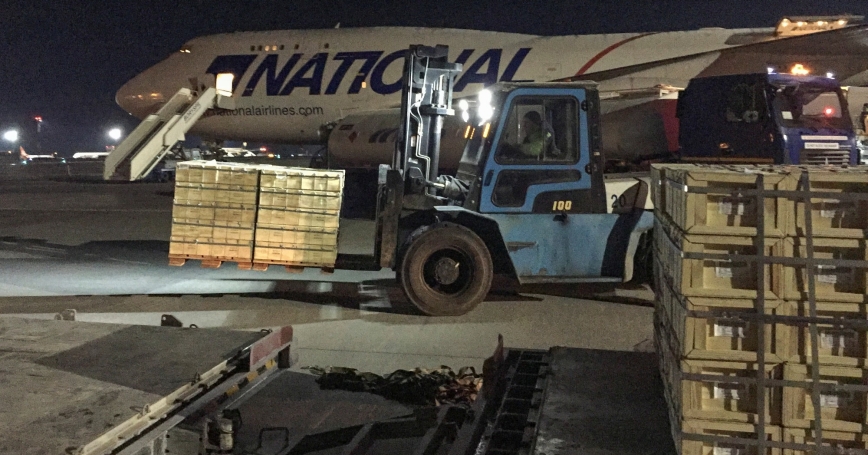 Military aid from the United States is unloaded from a plane at the Boryspil International Airport outside Kyiv, Ukraine, February 13, 2022

At what point can the United States and other countries no longer afford the massive transfer of weapons to the Ukrainians, lest they jeopardize the readiness of their own militaries? When does the arsenal of democracy shift to the arsenal for self? These are questions that are starting to be raised as the demand for weapons becomes clear in what is now a protracted war in Ukraine.

The contributions by the United States and Ukraine's other supporters have been immense. Chairman of the Joint Chiefs of Staff General Mark Milley said that as of mid-April approximately 60,000 anti-tank weapons and 25,000 anti-aircraft weapons went to Ukraine.

Javelins, Switchblades, and Stingers have been deployed regularly by Ukraine in its struggle against Russian invaders. Images of burning tanks, often with their turrets blown off, are a testament to the effectiveness of these weapons.

There is more on the way. Already, Ukraine's supporters have begun sending in artillery, armored personnel carriers, anti-aircraft systems, and other heavier weapons that allow the Ukrainians to successfully push back against a Russian invasion.

Calls to limit Western largesse are being voiced, because, as Hal Brands writes in The Washington Post, “This is presenting Western countries with a stark choice between pouring more supplies into Ukraine or husbanding finite capabilities they may need for their own defense.”

This is not unlike the pushback to President Franklin Roosevelt's March 1941 Lend Lease policy that rushed U.S. materiel support to Great Britain and the Soviet Union, including aircraft and warships. Arguably, this assistance kept the besieged British in the war.

In the euphoria of the Allied victory in 1945, the contentiousness of the debate in the United States about providing this support when the United States was not in the war is largely forgotten to history. This division is perhaps best seen in two close votes in Congress. Conscription to begin preparing the U.S. Armed Forces for the war was extended by only 1 vote in the House; the vote in the same body on Lend Lease was not as close—262 for to 160 against—but still reflected concerns about a widening American role in the “European War.” The victor's justice imposed by the Allies on Germany after the Great War, particularly their dividing up the spoils to add to their own colonial empires, still angered many.

Roosevelt, however, faced opposition (PDF) to Lend Lease from an unexpected quarter: his own military. The generals and admirals were concerned that the President was giving away the very weapons and materiel they needed to equip America's own mobilizing military. The demands were significant. When General George Marshall became Army Chief of Staff in September 1939, the Army had only 200,000 officers and enlisted in its ranks; in 1945 its ranks numbered nearly 8,300,000. At the most basic level, each soldier had to be provided boots, uniforms, and a weapon that were not in existing stocks.

American industry, particularly in the days before Pearl Harbor, was struggling to equip U.S. forces. To the alarm of the generals, the President was giving away what they believed they so desperately needed.

What FDR realized is that any weapon used against Nazis was well given. Similarly, every Russian tank killed by a Javelin or Switchblade and every aircraft downed by a Stinger supports Secretary of Defense Lloyd Austin's April statement that: “We want to see Russia weakened to the degree that it can't do the kinds of things that it has done in invading Ukraine.” These weapons are, after all, built to destroy enemy weapons. When they do it, and by whom they are fired, is irrelevant. The United States may have to restock its inventories, but the Russians will have to rebuild their Army.

One of the central lessons of the Russo-Ukrainian War could be that the prevailing view that future wars will be short and decisive needs rethinking.

One of the central lessons of the Russo-Ukrainian War could be that the prevailing view that future wars will be short and decisive needs rethinking. If this conflict is any harbinger, the United States and its allies and partners may need to be prepared for protracted wars that have insatiable appetites for materiel, munitions, and, tragically, people. If that is true, then the American arsenal of democracy, as well as those of its allies and partners, may have to be rejuvenated.

Furthermore, the challenge may not be only the demand shown by confronting Russian aggression. The National Security Strategy identifies China as the principal long-term U.S. challenge. If the United States is indeed serious about preparing for competition and potential conflict with China as well as Russia in the future, the demands could be significant given China's enormous capabilities.

Consequently, the ongoing war in Ukraine could lead to a rethinking of what a 21st century American arsenal of democracy will have to be to meet the challenges of the future.

David Johnson is a retired Army colonel. He is a principal researcher at the nonprofit, nonpartisan RAND Corporation and an adjunct scholar at the Modern War Institute at West Point. He is the author of Fast Tanks and Heavy Bombers: Innovation in the U.S. Army, 1917–1945. From 2012 to 2014 he founded and directed the Chief of Staff of the Army Strategic Studies Group for General Raymond T. Odierno.

This commentary originally appeared on RealClearDefense on June 27, 2022. Commentary gives RAND researchers a platform to convey insights based on their professional expertise and often on their peer-reviewed research and analysis.