What if Russia's Army Fails in Ukraine? 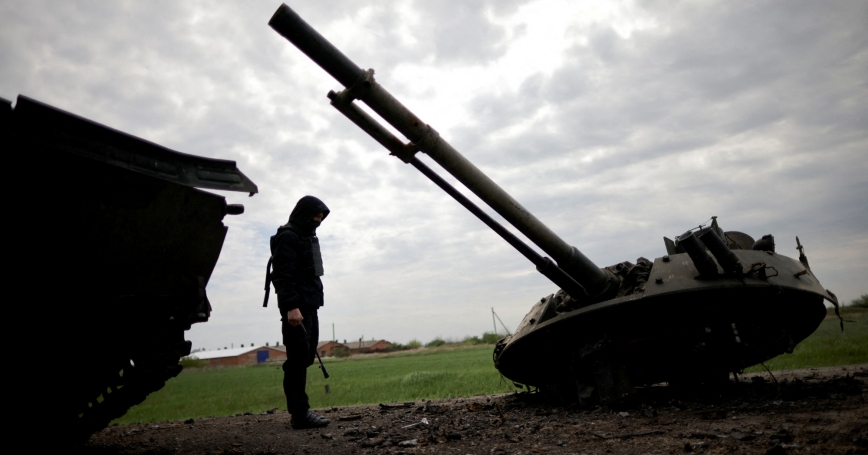 by Peter A. Wilson and William Courtney

Perhaps foreseeing a Russian win or stalemate in Ukraine, some foreign policy experts urge that it cede territory. French President Emmanuel Macron calls for not “humiliating” Russia. These entreaties could miss the mark. The battlefield is fluid and could turn for or against Ukraine. The West should prudently prepare for Ukrainian success as well as a less favorable outcome.

A few weeks ago, euphoria reigned when Ukrainian forces pushed back Russian attempts to seize Kyiv, Kharkiv, and Odesa—Ukraine's three largest cities. Now, pessimism is ascendant. Ukrainian President Volodymyr Zelensky speaks of “very fierce” fighting in eastern Ukraine and high casualties. Ukrainians may be running out of some ammunition.

Since neither side seems ready to quit, fighting will likely continue. But battlefield advantages could continue to ebb and flow, and Ukraine's fortunes remain uncertain.

Ukraine is fighting “for every inch” in Sievierodonetsk and mounting counteroffensives in the southern Kherson region. Ukraine's army benefits from a general mobilization. The will to fight is strong. Western support for Ukraine exceeds expectations. The West is supplying Ukraine with an ever-larger array of weapons and combat support systems, including artillery and rockets, counterbattery radars, and armed drones. Ukraine is making effective use of these arms. But Kyiv seeks more heavy weaponry, especially for counteroffensives.

Ukraine's main weakness is a firepower gap with Russia's artillery forces, which helps to enable Russian incremental advances in eastern Ukraine. But Russia's military suffers from severe deficiencies. Many troops lack the will to fight. Strong Ukrainian resistance and other factors prevented a Russian blitzkrieg from succeeding in overthrowing Zelensky.

Russia dispersed its initial invading force on too many axes. Russian forces appear unable to counter Ukrainian aerial drones and Javelin anti-armor and Stinger anti-air weapons. Russian logistics have been vulnerable to interdiction. Some Russian formations have lost discipline and raped and pillaged. Russian troops are stealing and shipping home Ukrainian goods.

Russian forces have reverted to World War II tactics of indiscriminate mass attacks with tube and rocket artillery to grind down Ukrainian defenses. But huge losses have demoralized Russian infantry and weakened armored units. This and the risk of opposition to a military draft may have deterred Russian President Vladimir Putin, in his May 9 Victory Day speech, from calling for large-scale war mobilization. Instead, Russia's military is struggling to regenerate fighting units that have suffered heavy casualties. Some units are receiving ancient T-62 tanks.

Despite incremental gains in eastern Ukraine, a Russian military collapse is possible. Russian forces could suffer catastrophic defeat akin to that of Egyptian President Gamal Abdel Nasser's army in the 1967 Six-Day War, when more than 80 percent of its military materiel was lost.

Is such a defeat possible? Military history is replete with breakdowns. Last summer, the Afghan armed forces collapsed amid weak governance and extreme corruption. So have other large or well-equipped armies—the demoralized Russian army in 1917, the outmaneuvered French army in 1940 and British army in Singapore in 1942, and the weakened South Vietnamese army in 1975 and Iraqi army in Mosul in 2014.

Central to these fiascos was a lack of cohesion in military institutions, poor governance and corruption, and popular unwillingness to defend the state. Military theorist Carl von Clausewitz's emphasis on sound relationships between the army (PDF), government, and society appears valid.

A Russian military collapse might have several implications. First, it might encourage Western countries to boost train-and-equip programs in other countries near Russia. In Ukraine, this effort seems to have helped it adopt more flexible and successful NATO-like tactics. Second, the collapse may cause Western intelligence analysts to reevaluate estimates of the vulnerability of the Baltics and Eastern Europe to Russian aggression. Against a Russian army that may be weaker than once thought, Baltic allies might consider defense options that go beyond tripwire postures. Third, Western militaries may sharply increase their stocks of weapons, which have worked so well in Ukraine—such as portable anti-armor and anti-air—but which have been consumed in larger numbers than expected.

Unlike Nasser, Putin possesses a large and diverse nuclear arsenal that he often touts and has ambiguously threatened to use in the Ukraine war if Russia's “existential” interests are threatened. But this has not deterred Ukraine or the West from opposing Russia's invasion.

A Russian military failure in Ukraine might give the West more confidence to challenge aggression elsewhere despite Moscow's nuclear weaponry. This would not be the first time. The United States confronted a nuclear-armed USSR in the 1962 Cuban Missile Crisis and 1973 Yom Kippur War. Russia may understand better than the West that its weak conventional forces might not enable it effectively to exploit any opportunities in Ukraine that a nuclear strike might create.

In conventional or unlikely nuclear-escalation scenarios, the West might consider keeping its negotiating powder dry until military and sanctions outcomes come into clearer focus.

Peter A. Wilson is an adjunct senior international and defense researcher at the nonprofit, nonpartisan RAND Corporation and teaches a course on the history of military technological innovation at the Osher Lifelong Learning Institute. William Courtney is an adjunct senior fellow at RAND and was U.S. ambassador to Kazakhstan, Georgia and U.S.-USSR negotiations to implement the Threshold Test Ban Treaty.

This commentary originally appeared on The Hill on June 19, 2022. Commentary gives RAND researchers a platform to convey insights based on their professional expertise and often on their peer-reviewed research and analysis.