Rebuilding Ukraine for a Changing Climate 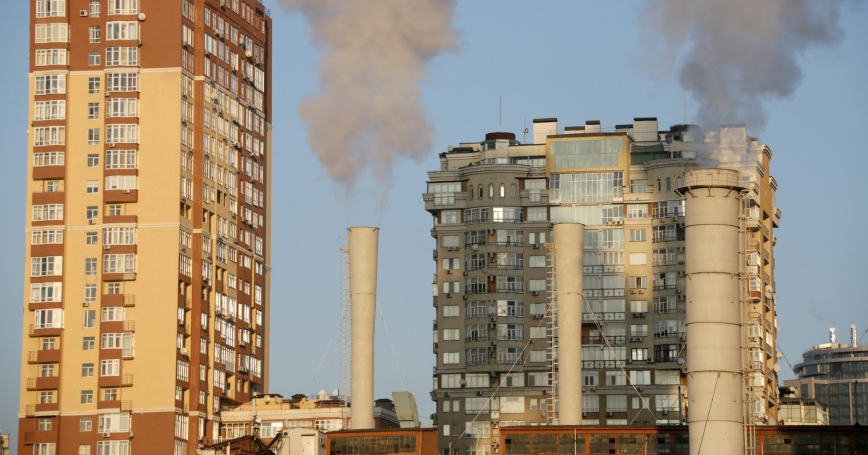 Smoke rises from the pipes of a heat power plant, Kiev, Ukraine, November 27, 2015

The Kiev School of Economics keeps a running account of damage to Ukraine's infrastructure. As of May 25, it totaled over $105 billion, including 44 million square miles of residential buildings, 15,000 miles—or 14 percent—of all roads—and according to the Ukrainian Ministry of Energy, $2 billion in damage to energy infrastructure. The extent of that damage will, almost certainly, grow. And the cost of rebuilding will, almost certainly, rise. And yet, eventually, the war in Ukraine will end, and the country will in all likelihood undergo a massive reconstruction.

Such a moment presents a historic opportunity. Ukraine could rebuild in a way that would both lower its carbon footprint and construct infrastructure resilient to the effects of climate change. Such transitions toward a clean, efficient, and resilient infrastructure are generally quite costly. Part of this cost normally comes from stranded assets—that is, assets no longer economical in the new sustainable grid design that need to be decommissioned.

For instance, in the United States, the estimated mean cost per megawatt to retire a coal-fired power plant is $117,000. The average U.S. coal plant has a capacity of about 350 megawatts, which means decommissioning a typical American coal plant costs more than $40 million. The typical coal plant in Ukraine has even larger capacity—on average about 1,133 megawatts.

Ukraine could rebuild in a way that would both lower its carbon footprint and construct infrastructure resilient to the effects of climate change.

As horrible as the destruction of Ukraine is, a small portion of the infrastructure that has been badly damaged or destroyed might inadvertently also reduce the costs of a possible future transition to a cleaner energy infrastructure, as many of its stranded assets have been permanently decommissioned by the war.

Before the war, Ukraine had set (PDF) a climate goal of using renewable sources for more than 20 percent of its electricity by 2035. In 2020, most of Ukraine's energy consumption had been from unsustainable sources, including 30 percent from coal, 32 percent from natural gas, and 14 percent from oil. Only 4 percent came from renewables. In the wake of the war, Ukraine could rebuild a more climate-resilient electric grid by relocating or undergrounding its transmission lines and adopting a less-centralized grid. This new grid could also be designed to allow for more-renewable generation via wind and solar. Ukraine could also electrify more of its buildings and transportation infrastructure, further reducing future emissions. Paired with more-sustainable energy generation, such investments could enable Ukraine to meet, if not exceed, its climate goals.

Such goals are worthy of meeting, as Eastern Europe is already experiencing the effects of climate change with a shift in seasonal precipitation patterns and mean air temperatures that now exceed a pre-1990 baseline by 1.5 degrees Celsius. The changing rains and rising temperatures are likely to lead to a near doubling of the length and severity of drought conditions, and become a further strain on water resources (PDF) for the agricultural and industrial sectors, which together comprised approximately 40 percent of Ukraine's pre-war GDP. Over the next century, weather (PDF) events such as wildfire and drought, caused by seasonal temperature extremes, will affect the efficiency and reliability of the country's aging energy infrastructure. California (PDF) serves as a harrowing example: between 2000 and 2016, wildfires damaged over $700 million worth of grid transmission and distribution infrastructure.

Exactly how Ukraine and its allies finance the country's rebuilding in the wake of the war remains an open question. One idea is to use Russian Central Bank reserves, which are currently frozen in international institutions. Regardless of how, exactly, the rebuilding is funded, the transfer of money alone will not be sufficient. Our research into the reconstruction efforts in Puerto Rico and the U.S. Virgin Islands following Hurricane Maria demonstrated that much also depends on the capacity to manage complex processes, such as financial management and cost estimation, supply chains, as well as environmental and historic preservation. The recovery and rebuilding processes often take a long time. Rebuilding in the United States after Hurricane Sandy took over a decade, which was considered relatively quick compared to other disasters. Capacity building in Ukraine's government and engineering administrations—which will oversee the rebuilding itself—will be paramount to manage such a complex and monumental task.

This commentary originally appeared on The Hill on July 8, 2022. Commentary gives RAND researchers a platform to convey insights based on their professional expertise and often on their peer-reviewed research and analysis.