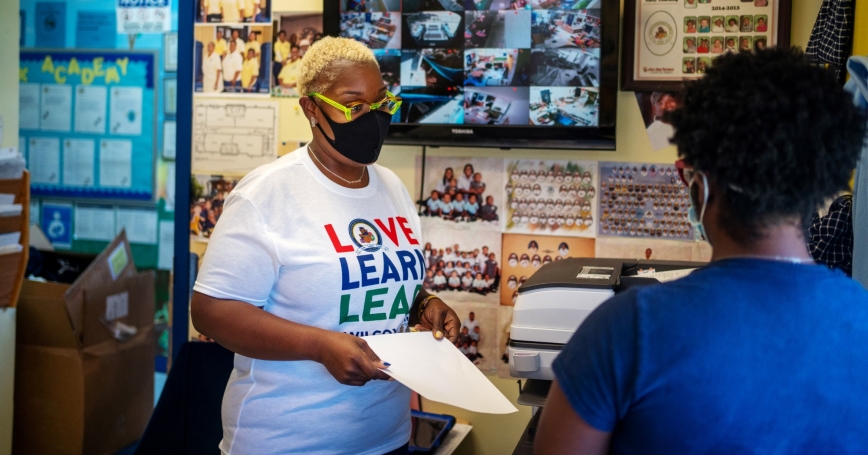 The U.S. labor market is on track to hit a milestone this month or next: It will have recovered all of the jobs lost in the pandemic recession.

That is a remarkable feat, but one lost in the worries of whether inflation is bringing another recession quick upon its heels. What should be a moment of retrospection, when we scrutinize the economy's performance in that recovery, is instead swamped by speculation of what may be coming next.

But that retrospection is necessary. A recession marked by extremes—the worst job loss, the highest unemployment, the fastest recovery since the Great Depression—reveals weaknesses in our labor market that a mild recession couldn't.

The pandemic recession officially started in February of 2020. The labor market bottomed out two months later with a shocking 22 million jobs lost in April 2020. However, the economy consistently added jobs each month since then (excepting a single setback in December 2020). The pace of job growth in 2021 was on par with the fastest in the postwar era. If it holds, the United States will regain all of the jobs lost in the recession by July or August of this year, exceeding most all expectations. Figure 1 shows the monthly change in the number of total jobs in the U.S. economy relative to February 2020.

Adding 22 million jobs in just over two years has no precedent in modern recessions. The U.S. labor market has never recovered that many jobs so quickly.

A recession marked by extremes reveals weaknesses in our labor market that a mild recession couldn't.

Figure 2 summarizes the most recent 12 recessions the United States has experienced; each line charts the percentage of jobs lost since the recession officially started. In grey are the 20th-century recessions. They were often fairly short, with 1–5 percent job loss regained within about two and a half years. The 2001 recession changed that pattern and set a new precedent: prolonged and sustained job loss followed by slow job growth.

The 2007 (Great) recession followed that shape but was even worse. Over two years, the economy shed 8.7 million jobs that took another four years to recover. At that pace, the depth of the pandemic job loss in 2020 would have taken over a decade to recover. Regaining those jobs in under three years is an unequivocal success.

But in a labor market with more than 150 million workers, the danger in declaring victory over a recession is failing to consider the unevenness of success.

The pandemic recession exposed multiple structural weaknesses in the labor market. Among them: the extent of sudden job loss in industries such as elective health and leisure and hospitality; the high rates of COVID-19 among workers in certain manufacturing sectors; the stress experienced by educators in public schools; and many more. Each of these carry their own story through the recession of decline and recovery, of policy options pursued or not, of lessons to be learned.

A standout weakness throughout the recession and recovery, however, has been women's labor force participation—that is, the share of women in the population who are either working or actively looking for work. The factors that have been squeezing women out of the workforce are by some measures getting worse, not better.

Although both men and women saw a large drop in labor force participation at the start of the recession (men lost just under 3.5 million workers, women lost just over 3.6 million), men have since regained their prior levels while there are still nearly 1 million fewer women working. Figure 3 shows the monthly change in labor force level since the start of the recession. Women experienced a larger decline in nearly every month, and by 2022, men and women appeared to be moving in different directions.

The data show that the pandemic recession and its recovery treated men and women differently, and treated women of color differently from white women—but it's difficult to parse to what extent or why. Men and women do not work in the same industries, for example, and various industries experienced different levels of disruption and job loss. The degree to which either or both of those factors pushed more women out of work is hard to quantify. The same is true for women of color versus white women. The challenge is not just to account for the differences between groups, but also how each difference was affected by the pandemic.

The pandemic recession and its recovery treated men and women differently, and treated women of color differently from white women—but it's difficult to parse to what extent or why.

At the same time, a near universal difference between men and women workers is the issue of caretaking. Women are much more likely to provide unpaid care to family members. Their ability to work is more likely to depend on securing a caretaker for a child or other family member. And women are more likely to be employed in paid care-related fields. Men are largely insulated from these limitations.

That lack of access to care could curtail a woman's ability to work was a known economic weakness before the pandemic, but this recession put it in the spotlight. By some measures, this constraint got worse.

Figure 5 shows the percentage change in jobs since the start of the recession for all jobs as well as jobs in childcare, nursing care facilities, residential mental health facilities, community care facilities, and other residential facilities. Childcare experienced more than double the job loss as the economy overall, losing one-third of all jobs at the start of the pandemic. Residential care, on the other hand, did not experience the initial job loss that the economy overall did, but instead a slow and steady decline in the two years since. In all of these industries, women are the majority of workers.

Employment in care fields today remains 6–15 percent lower than it was before the recession. One interpretation of this is that it poses a constraint for women who want to work; they cannot find or afford sufficient care. For instance, day care centers may have closed, be operating at a reduced capacity, or have less stability under continuing COVID-19 protocols. Another interpretation is that the pandemic changed people's preferences, reducing demand for out-of-home care. Young children have only just become eligible for the vaccine, and the number of deaths in facilities for the elderly may have made some more reluctant to live in nursing homes.

It's tempting to conflate two parallel trends—e.g., women have lower participation and there is less care available, therefore lack of care is reducing labor participation right now. But that type of causation isn't clear. Decreased demand for care could be pushing down care employment. Or, care employment could simply be low or falling because it is often very low-paid work, and that has nothing to do with lower women's labor force participation. What we do know is that in the past, expansions of affordable and accessible care, in particular childcare, has increased the numbers of women working (PDF).

Recovering the jobs lost in the pandemic recession is a victory worth celebrating. But ignoring the unevenness in that recovery might ultimately leave us on a weaker footing.