'Replacement Theory' Is a Danger to Us All 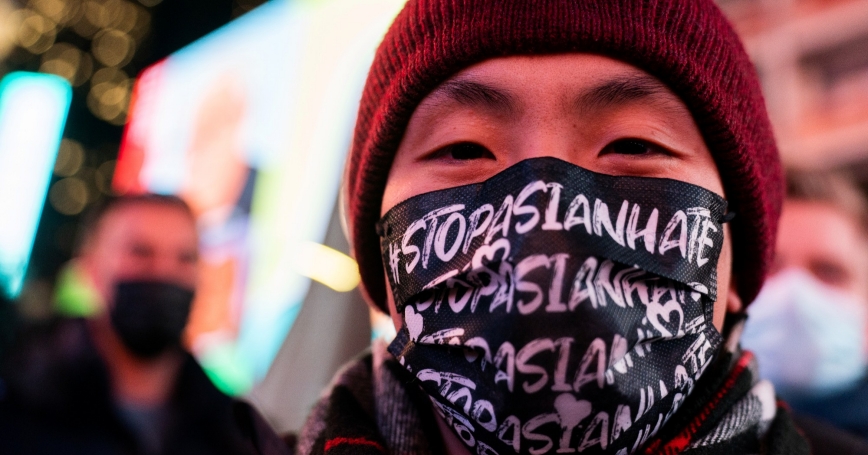 A man wearing a mask with the words "Stop Asian Hate" written on it attends a candlelight vigil for Michelle Go, New York City, January 18, 2022

The Buffalo supermarket shooting that killed ten Black Americans thrust the idea of “replacement theory” into the public consciousness. The shooter believed that an increasingly diverse society was forever altering what, in his mind, constituted a “real” or “true” American. He is, unfortunately, far from alone in these thoughts.

Much of the post-Buffalo conversation has rightly focused on Black and Hispanic communities as the intended targets. But that conversation could be expanded. Take one group still relatively absent in our national discussions about race and racism: Asian Americans. Other than brief periods following the Atlanta spa shootings, Asian Americans are largely shut out of the larger conversation, and left out of policy discussions that could help address violence or inequities.

This invisibility persists even though Asian Americans have been a consistent target, regarded as perpetual foreigners who take jobs, education, or other societal advantages that supposedly belong to “real” Americans. Even amidst a particularly violent year, harms to Asian Americans are routinely dismissed.

Even amidst a particularly violent year, harms to Asian-Americans are routinely dismissed.

Since early in the COVID-19 pandemic, Asian Americans have faced xenophobic rhetoric and physical violence while prominent officials have downplayed racial undertones in such incidents and refused to acknowledge links between racist rhetoric and violence. After the Atlanta spa shootings, a sheriff spokesman claimed that the shooter was simply having a “bad day.” A few days before the Buffalo shooting, a series of attacks appeared to target Asian businesses in Dallas, but the Dallas chief of police has been reluctant to label the shootings a hate crime.

After the Atlanta spa shootings, my RAND colleagues and I conducted interviews with Asian American community leaders, who emphasized, with evident frustration, the need to combat the ideologies behind such attacks. This sort of zero-sum thinking about societal opportunity assumes there are “real” Americans whose happiness and success in life are impeded by undeserving “others.” Of course, as with any zero-sum thinking, there are no winners in the end. Perpetuating such an uncompromising worldview only dooms us all to perpetual struggle.

Rather than view others as standing in the way of one's success, many of the Asian American community leaders we interviewed suggested a new way forward: Why not enlist others as partners in the fight against injustice? These leaders offered a more inclusive vision of American society, seeking to build coalitions across racial and ethnic communities, forge connections between communities and government, and increase representation in positions of power.

Several of our interviewees emphasized forging relationships with other racial and ethnic groups that could, for example, build on historical shared solidarity between Black and Asian American communities. Connecting communities to lawmakers and government agencies would also counter a long history of using legal and political power to limit immigrants' ability to work, move freely, or even immigrate. Meaningful action to counter systemic injustice requires not just demographic representation, but electing leaders who hold a more inclusive understanding of what it means to be American. Often, that means leaders who are themselves from minority communities.

“Replacement theory” is far from an abstract idea—it is woven into the very fabric of American society, made all the more visible by the precipitous rise in hate crimes today. To reject the zero-sum thinking that will tear us apart is to do the opposite: come together to fight it.

Douglas Yeung is a behavioral scientist at the nonprofit, nonpartisan RAND Corporation, and a member of the Pardee RAND Graduate School faculty.

This commentary originally appeared on The Mercury News on July 5, 2022. Commentary gives RAND researchers a platform to convey insights based on their professional expertise and often on their peer-reviewed research and analysis.