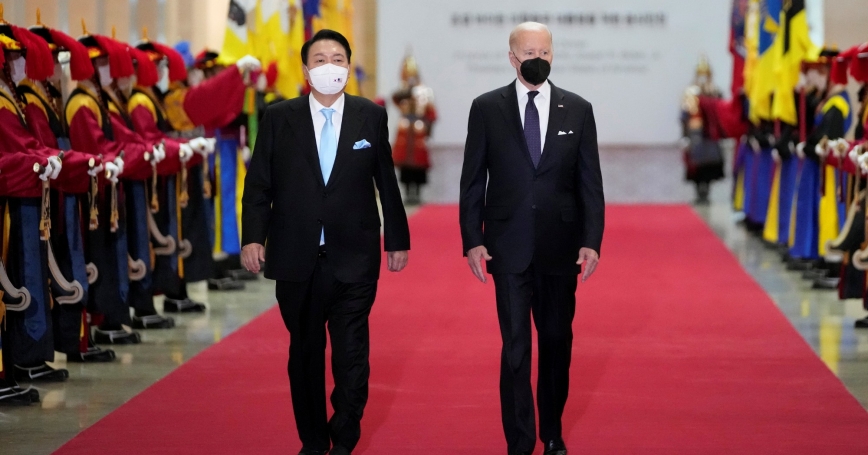 Yoon Suk-yeol, South Korea's conservative new president, has shown in less than two months that he is in lockstep with U.S. President Joe Biden on foreign policy.

In a nod to the importance of Yoon's presidency for American interests, Seoul was the first stop on Biden's first Indo-Pacific trip in May. During their summit, the two leaders covered an array of issues, including climate change, critical technologies, global health and economic and energy security. But it was their conversations in the security domain that suggest Yoon's overlapping tenure with Biden heralds a golden era in the U.S.-South Korea alliance.

On North Korea, Yoon and Biden agreed to “expand the scope and scale” of combined military exercises and training to deter potential aggression. Under former South Korean President Moon Jae-in and his counterpart President Donald Trump, these exercises were canceled to provide a positive atmosphere for negotiations with Pyongyang on denuclearization.

In his remarks after meeting with Biden, Yoon said they also discussed the possibility of deploying strategic military assets, whether “fighters, bombers, or missiles,” to South Korea to bolster deterrence.

In spite of his hard-line approach to North Korea, Yoon also agrees with Biden on the need to keep the door open for future negotiations with North Korean leader Kim Jong Un.

Yoon has noted that “In partnership with the international community, I am prepared to present an audacious plan that will vastly strengthen its economy and improve the quality of life for its people.” Biden has spoken similarly about engaging with Kim, and it would be fair to say that both of their policies are tantamount to a revamped version of President Barack Obama's strategic patience.

Yoon is also enthusiastic about righting South Korea's historically troubled relationship with another key U.S. ally, Japan. As previously reported in the article “Yoon's push for South Korea-Japan thaw meets hesitancy in Tokyo” published on June 18, Yoon and his team have reached out to Tokyo to strengthen security cooperation and, for now, have set aside stumbling blocks, most notably the World War II-era “comfort women” issue.

Specifically, Yoon seeks a bilateral strategic dialogue with Japan as well as reinvigorated trilateral discussions and drills including the United States. Yoon further wants to normalize the General Security of Military Information Agreement with Japan—a critical enabler of trilateral security cooperation and an agreement Yoon's predecessor threatened to terminate over a lack of trust. Yoon is moving so fast, in fact, that Tokyo may not be prepared politically to engage this new South Korea at such a close level.

On China, Yoon and Moon's talking points are similar. These include “the importance of preserving peace and stability in the Taiwan Strait” and a commitment to keeping peace through “respect for international law and freedom of navigation and overflight in the South China Sea and beyond.”

Yoon speaks more enthusiastically than his predecessor about the need for democracies to work together against autocracies, just as Biden has done.

However, Yoon speaks more enthusiastically than his predecessor about the need for democracies to work together against autocracies, just as Biden has done. After the summit, Yoon noted that although Seoul did not wish to exclude any nation, he and Biden nevertheless “want to start this close solidarity and cooperation among the like-minded countries and countries that share the [liberal] values.”

In an interview with The Washington Post in April, Yoon said of China, “we need to consider that our constitutional or political values are completely different. We have to respect those differences.”

To be sure, Yoon is unlikely to be a China hawk, which also aligns well with Biden's policies. The Biden administration has consistently talked about the need for “guard rails” to keep U.S.-China competition from spiraling out of control.

Similarly, Yoon has limits on angering China. For instance, he did not raise human rights abuses in Hong Kong and Xinjiang while meeting with the Chinese ambassador after his election. Nor does Yoon currently have plans to deploy additional U.S.-made Terminal High Altitude Area Defense (THAAD) batteries in South Korea, despite North Korea's recent spate of missile tests. This is because, after the 2017 THAAD deployment, Beijing retaliated with economic sanctions that crippled part of South Korea's economy.

Perhaps more than any South Korean leader before him, Yoon seems to have a global perspective. He wants his nation to become a “global pivotal state,” and Biden appears keen to capitalize on these ambitions. In concrete terms, Yoon quickly agreed to participate in the Biden administration's new Indo-Pacific Economic Framework.

Yoon also would like South Korea to join the Quad alongside Australia, India, Japan and the U.S.—a move Moon was cautious to make. He wants to extend Seoul's diplomacy beyond the Indo-Pacific to include Europe as well. Last week, Yoon became the first South Korean leader ever to attend a NATO summit. He has also kept sanctions in place against Russia.

They may further struggle to strike the traditional balance between Washington and Beijing when Yoon has so blatantly sided with the U.S. on everything. They may also face criticism if their focus remains peninsular rather than regional or global.

Regardless, Yoon's ambitions, if realized or even partially realized, will cast a long shadow for many years to come.

This commentary originally appeared on Nikkei Asia on July 5, 2022. Commentary gives RAND researchers a platform to convey insights based on their professional expertise and often on their peer-reviewed research and analysis.