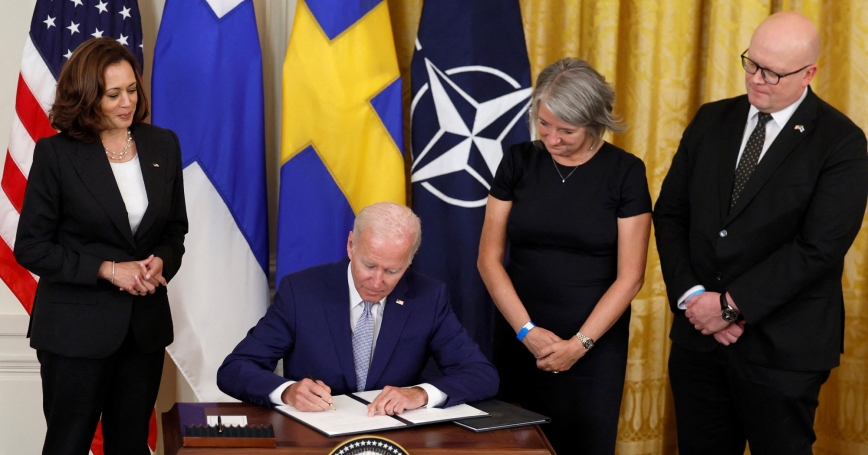 With the U.S. Senate's ratification, along with that of over 20 other allies, Finland and Sweden are poised to become full NATO members in the near future. The Nordic pair's entry into NATO means that alliance leaders and planners confront new challenges, and just as many opportunities.

First and foremost, what will be Finland and Sweden's role in collective defense of the northeastern flank?

The operational area NATO needs to defend has become larger, though so too has the area from which allies could take countervailing actions to blunt any aggression. This means that planners may need to revisit the alliance's concept for the Deterrence and Defense of the Euro Atlantic Area and the family of operational plans that support it. Finland could probably secure its land border with Russia largely on its own, but the use of Finnish and Swedish territory as logistics hubs or staging areas, airspace management, and control of key maritime terrain may need to be studied carefully.

Fortunately, some of these issues have been explored within bilateral and multilateral settings; the next step is to socialize and iterate options across the alliance, inject capability requirements into the NATO Defense Planning Process, and develop solutions within revised operational plans. Wargaming, including within appropriately scoped events whose results can be publicized, will be important to achieving buy-in.

The operational area NATO needs to defend has become larger, though so too has the area from which allies could take countervailing actions to blunt any aggression.

One northeastern flank issue that may deserve careful scrutiny relates to NATO Command Structure. In particular, will an existing Joint Force Command incorporate the new territory, or should Norway, Sweden, and Finland develop a trilateral structure, perhaps with a small number of officers from other allies, building off their well-developed relations and operational cooperation? The answer could depend on important political considerations, as it should, but research conducted prior to the 2018 standup of Joint Force Command Norfolk demonstrates several military imperatives essential to command and control.

Whatever the organizational solution, it may need to maintain the doctrinal principles of simplicity and a reasonable span of control; enable speedy transition from peacetime to crisis; and be able to withstand the pressures of the DDA-envisioned, highly kinetic, multidomain campaign that could unfold against a future reconstituted Russian military. Critically, allies should resist the temptation to build new headquarters without properly resourcing them, or should at least design them to be scalable from the start.

Second, what will Finland and Sweden's role be in support of the nuclear mission? Once full allies, both will presumably be attending the Nuclear Planning Group, which coordinates nuclear issues from the working level on up to heads of state and government. This venue will be where potential Finnish and Swedish contributions are explored, debated, and ultimately implemented. NATO is a nuclear alliance and the allies will need to deliberate carefully how the new entrants could support this mission, if at all. Providing conventional forces to support nuclear-centric exercises is one option that could enhance deterrence. Wargaming, here too, could be informative to developing a thorough understanding of crisis dynamics in a situations when an adversary might threaten nuclear escalation.

Third, how is NATO impacted in the realm of hybrid warfare and unconventional capabilities? This could be an area where Finland and Sweden could strengthen the alliance's competencies, making it smarter in hybrid, and do so quickly. Both nations have been leaders in societal resilience, cross-government coordination, and a comprehensive approach to security.

Consider Sweden's new psychological defense agency or Finland's highly regarded security of supply strategy. Intellectual capital from these and similar efforts could inform other allies' national planning and NATO-wide standards. Both Nordic allies also possess deep historical experience and savvy in assessing Russian capabilities and intentions, key to informing NATO's intelligence picture and deliberations on how to interact (and how not to) with the Kremlin. Helsinki and Stockholm's technological wherewithal may be helpful too, including for surveillance, telecommunications security, and climate change adaptation.

One outstanding dilemma concerns recent NATO-EU coordination on hybrid and unconventional threats; at times implementation has seemingly lagged political intent. Finland and Sweden have a strong track record of pragmatism in this regard, and may be counted on to help integrate, deconflict, or separate NATO and EU tasks on a case-by-case basis.

Finally, beyond deterring Russia and preparing for collective defense, what will be Finland and Sweden's role be in countering terrorism and other challenges in the south? Most of the southern allies remain worried about terrorism, and migration, spilling into Europe from North Africa and the Middle East. The DDA and NATO's new Strategic Concept thus make clear that, alongside Russia, terrorist groups represent the gravest threat to allies.

The strength of NATO is that it is at its essence an ongoing consultation based on trust.

Here, Finland and Sweden could take an active role in NATO's various political dialogues and capacity-building efforts with partners, drawing on their experience in NATO operations in Afghanistan, EU missions in Africa, and U.N. peacekeeping missions. They could also make occasional contributions to standing missions, such as Operation Sea Guardian in the Mediterranean, or exercises on NATO's southern flank. These contributions could be a powerful sign of solidarity, and if carefully organized, can even complement collective defense in the north. After all, Russia's presence in the south remains a major concern.

The speed with which Finland and Sweden were invited to join NATO reinforced Western unity in the face of Russian aggression. The strength of NATO is that it is at its essence an ongoing consultation based on trust, and where needed a central meeting point for smaller groups of allies to collaborate on an issue-by-issue basis. Finland and Sweden could benefit by working from the outset to advance the dialogue, express their interests, and help to shape what can be a stronger, smarter NATO.

Gene Germanovich is an international defense researcher at the nonprofit, nonpartisan RAND Corporation.