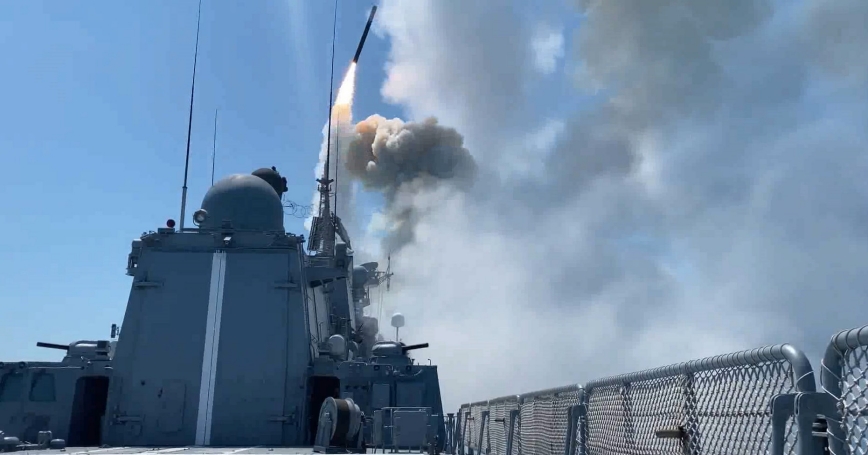 A Russian frigate launches a Kalibr cruise missile at a Ukrainian target from the Black Sea, June 15, 2022

Photo by Russian Ministry of Defence/Reuters

by Peter A. Wilson

Russia's war in Ukraine entered the summer of 2022 with no clear military victor in sight. What began as a war of expected bold Russian maneuvers coupled with a paralyzing aerospace and cyber campaign has degenerated into a massive tube-and-rocket-artillery duel, a World War I–style battle of attrition on a battlefield largely confined to the eastern Donbas region and along the Ukrainian border north and west of Crimea.

Although it is important to exercise caution in drawing any major conclusions, some powerful signs about the future of warfare can be derived from this conflict.

At the strategic and operational levels of war, the Russian aerospace campaign points to an ongoing trend toward the increased robotization of deep-strike systems. The extensive use of long-range precision-guided cruise and ballistic missiles gave Russia the ability to strike a wide range of high-value targets without the use of a fleet of Russian-manned combat aircraft. In fact, the Russian strategic bomber fleet acted as a standoff launch platform for long-range cruise missiles and occasional hypersonic weapons. Noteworthy is the extensive use of ground- and sea-launched long-range cruise missiles, as well as the launching of precision-guided short-range ballistic missiles (SRBMs) to strike high-value targets.

The Russian aerospace campaign points to an ongoing trend toward the increased robotization of deep-strike systems.

This development is not unprecedented: The Islamic Republic of Iran used similar systems during the late summer of 2019 and conducted a precision SRBM bombardment of a U.S. airfield in Iraq during January 2020. Meanwhile, the U.S. Navy and Air Force have extensively leveraged long-range land attack cruise missiles (LACMs). This began with the NATO aerial campaign against Serbia in 1995. Now the diffusion of this robotized deep-strike capability has spread to major military actors in Eurasia and its periphery.

The development of next-generation long-range strike systems by the United States, China, and Russia—to include the rocket-propelled boost glide vehicle (BGV) and the hypersonic cruise missile (HCM)—demonstrates a far more damaging and sustained nonnuclear bombardment campaign.

The character of the Russo-Ukrainian battlefield has revealed several interesting features. First, the mass diffusion of tactical anti-armor and anti-aircraft munitions has imposed very high attrition against ground and air forces that were not protected by a wide range of individual and collective countermeasures. This diffusion of guided anti-aircraft weapons had denied the Russian Aerospace Force the opportunity to gain operational and tactical air superiority over the battlefield.

Second, the war has witnessed the full operational emergence of Ukrainian and Russian reconnaissance fire complexes—the closed-looped systems that couple robotic aerial surveillance systems with tube and rocket artillery—which can use precision-guided munitions (PGMs). These new-generation artillery systems are now complemented by the employment of increasingly large numbers of loitering munitions that can simultaneously provide infantry with over-the-hill intelligence and a quick direct-strike capability. A further hint of this new feature of twenty-first century combined-arms warfare was the successful use of these systems by the Azerbaijani armed forces during their short 2020 war against the heavily entrenched and armored Armenian forces. This refined indirect fire system has largely replaced the use of combat aircraft armed with PGMs to provide close and direct air support to ground forces—a shift prompted by the presence of proliferated, mobile, and internetted air defense systems.

The Russo-Ukrainian war may answer the question of whether the employment of guided munitions and robotic fighting vehicles has returned disproportionate power to the tactical defense (not unlike the military circumstance (PDF) the European armies faced (PDF) in the summer of 1914). The tactical offensive must be reconstituted to respond to a battlefield wherein the main battle tank and its supporting cast of armored fighting vehicles are vulnerable to rapid discovery and destruction by robotic systems.

The answer might be revealed during the current Russo-Ukrainian war. This late summer, the Ukrainians could gain fire superiority over a very badly attritted Russian combined arms force—not unlike the Israeli defeat of the Egyptian Army in the Sinai (PDF) during the Six Day War of 1967—thereby demonstrating that traditional armored forces have a major role in the future of combined arms operations. The design of future armored fighting vehicles could be radically altered with the widespread use of unmanned fighting vehicles to precede and compliment the offensive use of their larger and much-more-expensive manned systems. This concept is being vigorously explored by air forces in the form of developing increasingly autonomous combat aircraft to act as “loyal wingmen” for the piloted combat aircraft.

The Russian long-range missile bombardment campaign has been severely limited by its rather small prewar inventory and lack of industrial capacity to mass produce these weapons quickly. Overall, the Russian strategic bombardment campaign has not been decisive. On the other hand, NATO and the great powers of Asia will take note of the extreme vulnerability of their critical infrastructure to long-range PGM strikes. One of the pressing defense policy questions (PDF) is how NATO and Washington's Asian allies should respond to this clear and present danger. To make critical infrastructure resilient to precision bombardment, for example, the United States and its allies and partners should consider putting a portion of their military industrial production capacity, especially robotized instruments of war, underground to complement any major investment in homeland aerospace defense systems.

Peter A. Wilson is an adjunct senior national security researcher at the nonprofit, nonpartisan RAND Corporation and teaches courses on national security policy and the history of military technological innovation at the Osher Lifelong Learning Institute.

This commentary originally appeared on Atlantic Council on August 30, 2022. Commentary gives RAND researchers a platform to convey insights based on their professional expertise and often on their peer-reviewed research and analysis.