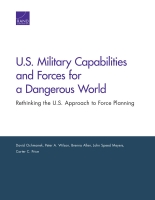 U.S. Military Capabilities and Forces for a Dangerous World

This report evaluates the capabilities of current and programmed U.S. forces to meet the demands of conflicts that could arise involving any of five potential adversaries: China, Russia, North Korea, Iran, and Salafist-jihadi groups worldwide. The report finds that U.S. forces today are larger than necessary to fight a single major war, are failing to keep pace with the modernizing forces of great power adversaries, are poorly postured to meet key challenges in Europe and East Asia, and are insufficiently trained and ready to get the most operational utility from many of its active component units. The report recommends a host of enhancements to the capabilities and posture of U.S. forces and offers three alternative force planning constructs to help ensure that defense resources are, in the future, applied to the highest-priority needs.

Force planning in DoD today should place greater priority on modernizing the capabilities and posture of U.S. forces in order to better enable them to deter and defeat aggression by China, Russia, and North Korea.

Key investment priorities should include:

Implementing these recommendations at today's level of defense spending would necessitate substantial reductions in force structure. The nation could avoid major force cuts and achieve the objectives outlined above by increasing defense spending by $20 billion to $40 billion per year on a sustained basis.

This project is a RAND Venture. Funding was provided by gifts from RAND supporters and income from operations. The research was conducted within the International Security and Defense Policy Center of the RAND National Defense Research Institute.