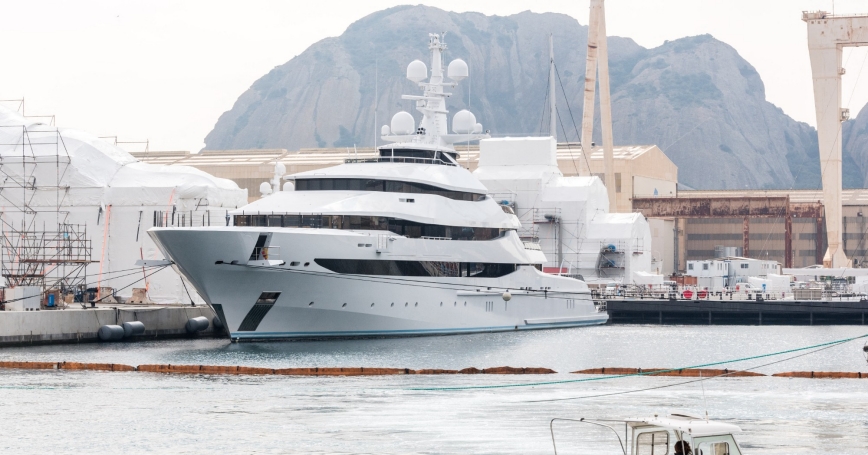 Rosneft boss Igor Sechin's yacht Amore Vero, which was seized by French authorities, in La Ciotat harbor, in the south of France, March 4, 2022

Western sanctions are ensnaring more Russian business leaders, some of whom say they are unjustly targeted. Can those in the private sector reduce their risks of being designated? Perhaps, if they make difficult choices.

In 2014, most wealthy Russians were quiet about the invasion of Ukraine and illegal annexation of Crimea. Some in the West saw silence as complicity. Moscow's renewed war fuels stronger concern. Questions are asked about how Russian business leaders weigh the value of loyalty to the Kremlin versus longer-term or global interests that may differ. And what about the civic responsibilities of business leaders?

Wealthy Russians enjoy Western benefits, from secure banking to quality schooling to safe living and vacations in Europe. But some in the West may see them as less than courageous for not opposing Russia's aggression in Ukraine and the massacre of civilians.

This disquiet helps strengthen consensus Western support for sanctions, which can have powerful effects in capital-starved Russia. Businesses may be cut off from Western capital markets for new equity or loan financing. For many this may not have an immediate effect, but in the medium and long term, such access could be vital.

Some in the West may see weathy Russians as less than courageous for not opposing Russia's aggression in Ukraine and the massacre of civilians.

As the simmering conflict in eastern Ukraine dragged on, U.S. patience wore thinner. In April 2018, the United States began sanctioning private-sector business leaders. The first were Oleg Deripaska, owner of aluminum and motor vehicle companies, and Viktor Vekselberg, owner of a conglomerate that includes aluminum, oil, energy, telecoms, and other assets. A leaked U.S. diplomatic message had called Deripaska “among 2–3 oligarchs“ to whom Putin often turns. But Vekselberg was not seen as so close to the Russian president, a hint that U.S. sanctions policy might cast a wider net.

In this vein, last March the United States unveiled an “expansive list” of targets: “elites and family members” who back Putin” or “enriched themselves at the expense of the Russian people … elevated family members to high-ranking positions … (or) sit atop Russia's largest companies and … provide resources” to support the Ukraine invasion.

Some business leaders have. In February, banker Mikhail Fridman said war could “never be the answer,” Deripaska urged negotiations “as soon as possible,” and steel magnate Aleksey Mordashev said it was “terrible” that Ukrainians and Russians were dying. In March, global steel owner Vladimir Lisin said lives lost were “impossible to justify.” In April, Oleg Tinkov, a top banker, said “we are against this war.” He was soon forced to sell his bank at a heavy discount.

Criticizing the war may not be enough. Notwithstanding Mordashev's criticism, the United States and the European Union have sanctioned him. Business leaders might be bolder if riskier. They could blame Russian authorities or decline to support the war effort. No prominent business leader seems to have done so. Tinkov's punishment may be a deterrent.

Russian business leaders might look for ways to aid Ukraine or its people. They or their companies could support Ukrainian refugees. They might cease collecting on Ukrainian debts. They could help in countries that suffer collateral damage from sanctions, such as those in Central Asia.

Although business leaders may fear Kremlin power, they may also realize that Russia's war, isolation, and economic erosion pose rising threats to their businesses.

Some Russian business leaders may think they are stranded in a perfect storm. The Kremlin demands loyalty, but its war has destroyed unprecedented business value. Military setbacks and economic decline could weaken the grip of Kremlin leaders or spark change. If new leaders came to power, they might seek economic relief through better Western ties, but sanctioned companies could lose ground. If a peace settlement were to emerge, sanctioned businesses could forfeit more of their assets in the West to help fund Ukrainian recovery.

Russian business leaders have obligations to employees, owners, suppliers, and customers. They must make reasonable efforts to protect those interests. Although business leaders may fear Kremlin power, they may also realize that Russia's war, isolation, and economic erosion pose rising threats to their businesses. The choice is theirs to make.

William Courtney is an adjunct senior fellow at the nonprofit, nonpartisan RAND Corporation and was U.S. ambassador to Kazakhstan and Georgia.

This commentary originally appeared on The Hill on September 10, 2022. Commentary gives RAND researchers a platform to convey insights based on their professional expertise and often on their peer-reviewed research and analysis.