The Problem of Intra-Theater Lift: Moving Things Around in the Pacific Area of Responsibility 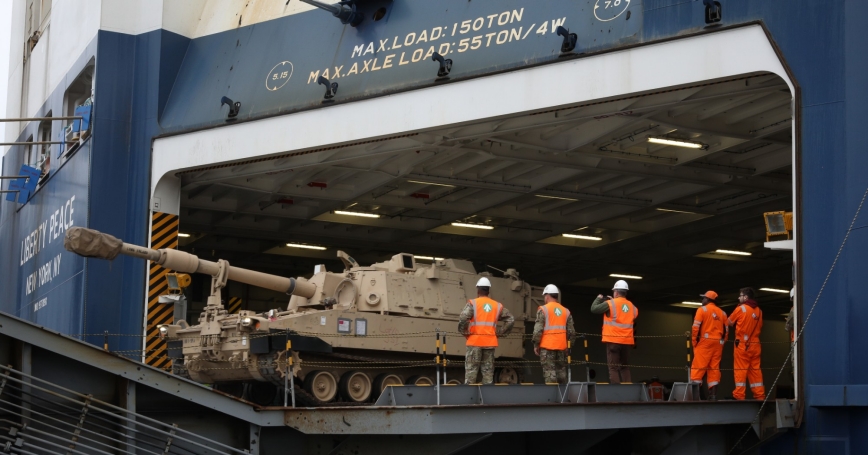 The United States is both blessed and hampered by geography. On the one hand, its continental isolation has kept it from direct attacks over most of its history. On the other, its efforts to project influence and power require the ability to support operations thousands of miles away from its home territory.

In many respects, the U.S. joint force ability to move materiel and people across oceans and continents is unique among militaries, not replicated by any current competitor (PDF). But, it carries challenges all along the supply chain: from manufacture, to delivery within the United States, to trans-ocean transport, to movement within theater. All these challenges have to be, and are addressed by, different agencies and military commands in a complicated set of processes. These processes are governed both by formal direction and by habitual relationships, and they for the most part satisfactorily meet routine peacetime demands. But, in cases like the one we are about to discuss, the requirements are ill-defined and the ability to meet wartime demands uncertain. We find this lack of clarity—and the potential resulting lack of capability—to be particularly troubling in the area of intra-theater lift over water. To understand why this complicated movement faces such problems in the Pacific Ocean, it's important to first understand how it works when it works well. To do that, it's helpful to zero in on the U.S. joint forces ability to move materiel and people within the theater of operations, what is known as “intra-theater lift.”

Intra-theater lift is the portion of the transportation chain that delivers materiel from a port of debarkation to the point of use by an operational unit. This function does not fall under the command of U.S. Transportation Command (USTRANSCOM), which controls “strategic” common user lift—i.e. movements from the continental United States to theater points of debarkation—through its components: Air Mobility Command, Military Sealift Combat, and Military Surface Deployment and Distribution Command. Intra-theater lift falls into a space between delivery of military materiel into a theater and the completely local movements tactical commanders may direct at scenes of action. In-theater logistics clearly belongs to the geographic combatant commander for the theater, but the actual provision of common user lift in theater is more a matter of custom than of clearly assigned responsibility.

In two major theaters—Europe and the Middle East—provisions for surface movements fall as a matter of practice on the Army as ground component commander. These are land-centric theaters, and Army Theater Support Commands (TSC) have well-established missions for providing trucks and contracting trains for intra-theater movement. Such movement is closely coordinated with the Defense Logistics Agency, as well as embassy country teams and combatant command logistics staffs. There are certainly challenges involved with providing fuel, ammunition, spare parts, and sustainment to operational units in U.S. Central Command and U.S. European Command, but in plans and resourcing, there is no real doubt as to which organizations are responsible for addressing the challenges. If there are shortfalls in surface transportation, the Army component commander and, in particular, the Army TSC, is responsible for correcting them.

Intra-theater movement is not a requirement set that has been well developed nor is there a clear concept for meeting it.

The Western Pacific Is an Area of Oceans and Islands

Even in Japan, with its extensive road network, movement of materiel and people in the Western Pacific will depend to a large degree on movements by ships and smaller watercraft. This will be a joint requirement, and may be particularly challenging for the Army, Air Force, and Marines as they contemplate expeditionary basing in austere areas, areas that may only be accessible by boats for commodities like fuel and heavy equipment.

Intra-theater movement is not a requirement set that has been well developed nor is there a clear concept for meeting it. Individual services have capabilities for meeting a portion of the demand, but taken together, these do not meet the complete demand and indeed may paradoxically generate both overlap and gaps. For example, both the Army, through organic assets, and the Marines, through Navy assets, may only meet part of their individual needs, and yet still leave out Air Force requirements which may be substantial in their employment of future concepts.

The same conditions that drive a common user lift solution for strategic lift—limited resources, common requirements, and a need for efficient scheduling—also applies for common user lift at the theater level. The need for a common user solution is understood in Europe and the Middle East, but not in the Pacific, with the potential effect of insufficient lift or lift poorly positioned for the most pressing warfighting needs. We are not making an argument for forced jointness but simply observing that some needs are common and most efficiently and effectively met by common solutions.

For strategic movements—movements from the continental United States to theater points of debarkation—U.S. Transportation Command has clear authority and service components. There are a variety of reasons the prior logic for strategic lift has not simply been extended to intra-theater movements, and indeed this has not proven necessary in areas of responsibility outside the Pacific, where the roles of Army Theater Support Commanders are well established. Indeed, TRANSCOM has admitted the uncertainty that still exists in this mission set.

In the INDO-PACOM area of responsibility, there is a Pacific-based Army TSC with responsibilities in Korea, Japan, and in the Philippines, as well as contractual structures for the procurement of fuel and purchase of spare parts by the Defense Logistics Agency. However, simply assuming the TSC and associated organizations will assume responsibility for meeting a joint waterborne transportation requirement seems inadvisable.

Title 10 of the United States Code detailing military roles and missions does not provide specific guidance. Indeed, referring to Title 10 enumerated missions, the Army is tasked with supporting ground operations, but a requirement for a TSC role is at best implied, not codified on in Subtitle B of the statute (PDF). The requirement/authority to operate watercraft in support of ground operations is clear, but the requirement to service other component missions is not. Army Techniques Publication 4-15 (ATP 4-15) (PDF) does describe intra-theater lift as a watercraft mission, but it does not directly identify this as a joint mission or incident to any requirements beyond those in Title 10.

The Navy, whose functions and organization are in section 8062 of Title 10, “shall be organized, trained, and equipped primarily for prompt and sustained combat incident to operations at sea.” While it is arguable that water-borne intra-theater lift is not an operation the Navy might choose as critical to sea control or sea-borne power projection, it is most certainly an operation at sea. The same logic that would cause strategic sealift to be a Navy component mission might apply in the case of intra-theater lift.

There are any number of organizational solutions, which could include assigning water-borne lift to the Army as part of its traditional TSC mission or assigning such responsibility to the Navy as the service best positioned to carry out at-sea operations or making USTRANSCOM responsible for all common user lift up to the point of tactical employment.

Intra-theater lift will be a much larger role than anyone is admitting. It might better be conceived of as a common user problem, with the user requirement defined jointly.

But the striking characteristic of all the potential owners of the requirement responses is collective reluctance to assume responsibility for the mission. The specific need for the force overall is not defined, and services are either programming for what they think might be a service requirement, or simply assuming someone else will provide whatever is necessary.

In all likelihood, intra-theater lift will be a much larger role than anyone is admitting. It might better be conceived of as a common user problem, with the user requirement defined jointly. The solution—whatever it may be—could be taken on by one agency, with the resources and organization provided to take on such a complex endeavor. In the current situation, the planning and programming requirements do not seem well defined. What is perhaps even more troubling is that the organization responsible for filling these ill-defined requirements is also not defined.