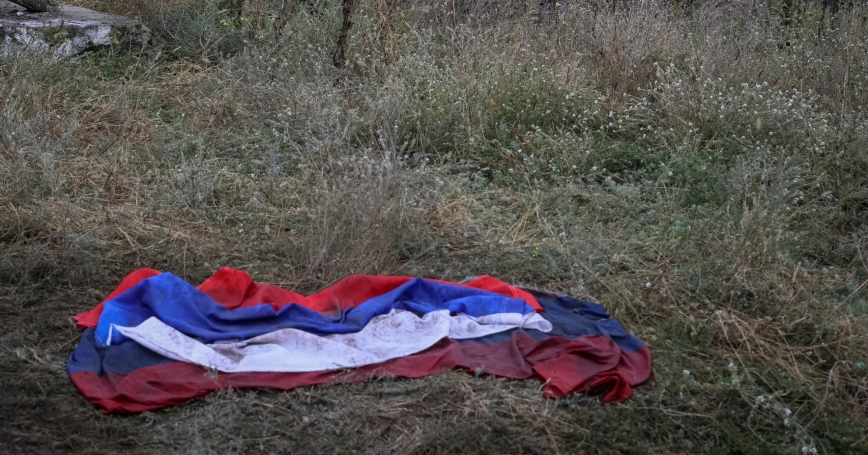 A Russian flag lies on the ground near a destroyed Russian tank in the town of Izium, which was liberated by Ukrainian Armed Forces in the Battle of Kharkiv, September 14, 2022

Battlefield victories, especially quick and unexpected ones, have a way of turning the tides of war. In the fall of 1777, the British Empire seemed invincible. Two years into the American Revolutionary War, a confident British Army seemed poised to divide the American colonies in two, crush the nascent rebellion, and restore imperial rule. That is, until a British force invading from Canada, commanded by Gen. John Burgoyne, was unexpectedly defeated by the colonists' Continental Army near the town of Saratoga in what is now upstate New York.

The victory at Saratoga proved a turning point in the war and changed the course of history. Burgoyne's surrender to the American Gen. Horatio Gates on Oct. 17, 1777, reduced the total combat power of the British Army in North America by about a quarter. It forced the British to shift their strategy and focus to the south. The victory gave Americans greater confidence in the pursuit of their cause, and it demonstrated to the world that the Americans might actually be able to pull off an outright defeat of the mighty British. Although the war lasted four more years, the Continental Army's victory at Saratoga was the beginning of the end of British colonial rule and the start of a chain of victories that culminated in American independence.

With their lightning counteroffensive over the last two weeks east of Kharkiv, Ukraine, the Ukrainians are now experiencing their own 1777 moment. The campaign has been a stunning operational success that, if properly exploited, could prove to be the turning point toward a momentous outcome few would have expected in the early days of the Russian invasion in February.

Like Saratoga, the Ukrainian victory in eastern Kharkiv oblast marks a significant military achievement. According to Ukrainian sources (and largely corroborated by unofficial Russian ones), the Ukrainian Armed Forces have reportedly liberated some 3,000 square miles in a matter of days—a multiple of all of Russia's gains since it launched its Donbass offensive in April. While total Russian losses are unknown, open-source sleuths such as the Dutch Oryx group have sifted through photos of abandoned Russian equipment as their operators retreated in haste—and counted hundreds of main battle tanks, infantry fighting vehicles, armored personnel carriers, and other equipment left behind, much of it intact. Entire ammunition depots switched hands as well. Amid what can only be described as a rout, Ukrainian forces captured scores of Russian soldiers, including several senior officers.

Above all, the Battle of Kharkiv has shown Ukraine, Russia, and the world that an outright Ukrainian victory is possible.

Just as Saratoga turned the tide for the Americans, the Ukrainians' Kharkiv campaign could also pave the way for further successes. Having reduced the Russian forces and deprived them of their main supply routes and staging areas threatening eastern Ukraine, the defenders can now shift forces in multiple directions—be it into the Donbas, to the ongoing counteroffensive in Kherson, or along the long southern front, where Ukraine now has a chance of severing the Russian land bridge stretching from the Donbas to Crimea along the Sea of Azov. At a minimum, the Kharkiv offensive has forced the beleaguered Russian forces to fall back, shrink their defensive line, and try to protect ever smaller occupied areas.

As important as the operational consequences of the Ukrainian victory are, the psychological ones could be even more important. The shock effect of this kind of offensive on a brittle, poorly led, and demoralized Russian military in Ukraine should not be understated. Even before the offensive, multiple reports suggested that Russian forces—faced with ongoing casualties, logistical shortfalls, and equipment failures—were already suffering from significant morale problems. Like the British after Saratoga, Russian forces suffered a major shock to their confidence with their defeat in Kharkiv. Judging by the scathing commentary in Russian Telegram channels and the shift of tone in the Kremlin-controlled media, Russians are in the process of losing the last remaining glimmers of their perceived military might.

Undoubtedly, Ukraine's success in its ongoing counteroffensive also will give the Ukrainian people a significant morale boost, showing them that their sacrifices and perseverance are beginning to pay off. This morale effect is hard to calculate, but by all indications, the suddenly more realistic prospect of defeating the Russian army and evicting it from Ukrainian soil has raised confidence among Ukrainians and will help them persevere until their war aim of kicking out the Russians is achieved.

The turn of the tide in Kharkiv also has significant international implications—and here, too, the comparison with 1777 is instructive. Out of all of the benefits the Americans gained from their victory over the British at Saratoga, the most critical was that it brought the Kingdom of France—a major European powerhouse—into the war on the side of the Americans. Today, the United States and major European powers are already supporting Ukraine, of course, but the Russian rout in Kharkiv has led Ukraine's partners to redouble their support. With Europe facing a cold winter and the prospect of a total cutoff of Russian gas, there was always the concern of whether Europe, seeing what looked like a stalemate in the war, would stay united behind Ukraine. The victory in Kharkiv will help the Europeans to hold out by bringing an end to the war into view.

Above all, the Battle of Kharkiv has shown Ukraine, Russia, and the world that an outright Ukrainian victory is possible. While Ukraine had already proved that it could successfully defend its terrain (as it did during the Battle of Kyiv), conduct precision artillery strikes, and mount limited special operations missions, there was a lingering question of whether it could launch and sustain the large-scale offenses necessary to regain Ukrainian territory. After the Battle of Kharkiv, these doubts can be put to rest. Just as after Saratoga, the idea of a Ukrainian victory has become plausible.

The Battle of Kharkiv will not end the war in Ukraine, just as the Battle of Saratoga did not end the American Revolution. Even after France entered the war as an American ally, it still took another four years before the final British defeat at Yorktown in 1781—and a further two years to negotiate a peace agreement. Ukraine may well face a similarly long road ahead. While Russia has suffered a major military blow over the last several weeks and months, it still has significant military resources at its disposal, and it still occupies roughly one-fifth of Ukraine.

Even so, the Ukrainians today are likely on a path to their own independence from Russian imperial control, just like the Americans no longer wanted to be a part of the British Empire. If Ukraine's allies in the West do not blink and stay the course, then this long road may ultimately lead to victory. And when the history of the war is written, the Battle of Kharkiv may carry the same central chapter in Ukraine's fight for independence as the Battle of Saratoga did for that of the United States.

This commentary originally appeared on Foreign Policy on September 17, 2022. Commentary gives RAND researchers a platform to convey insights based on their professional expertise and often on their peer-reviewed research and analysis.