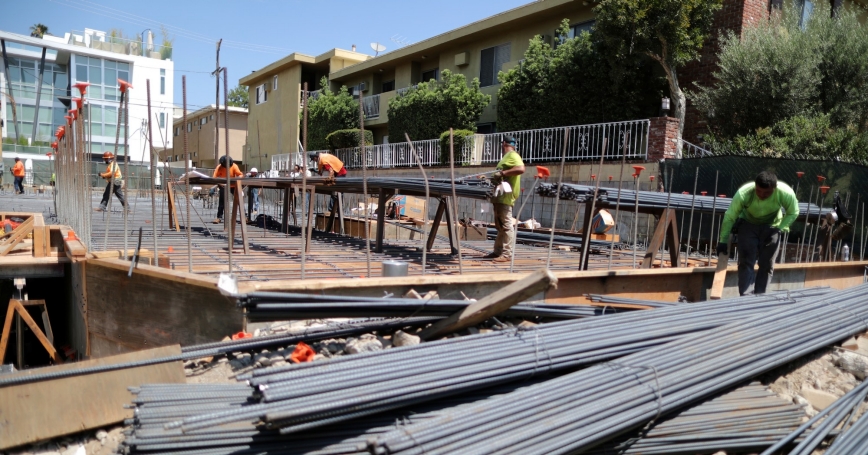 Los Angeles voters approved the so-called “mansion tax,” Measure ULA, which proponents suggested will raise funds for about 26,000 new units of affordable housing over the next decade. But a key labor provision casts doubt on that optimistic projection.

Measure ULA (PDF) requires that any funded projects of 40 units or more be bound by a project labor agreement requiring a nearly 100 percent union workforce. That might sound familiar. Back in 2016, the Los Angeles City Council attached a similar requirement to Proposition HHH—a $1.2 billion bond that was to spur the development of up to 10,000 units of permanent supportive housing for people experiencing chronic homelessness. The HHH agreement applied to projects with 65 or more units.

A RAND Corporation study I led in 2021 found that the HHH project labor agreement added roughly 15 percent to construction costs on affected projects. It had another significant effect: incentivizing smaller development. Of roughly 100 HHH-funded projects, more than 45 percent fell into the range of 50 to 64 units of housing—just below the threshold where union labor would have been mandated.

Larger projects allow fixed construction costs, including land acquisition, to be spread across more housing units—so these smaller projects drove up the per-unit average cost. Initial estimates for HHH projects were roughly $400,000 per unit; they are now around $600,000.

Measure ULA doubled-down project labor agreements by dramatically lowering the threshold to just 40 units. This appears intended to make the behavior of some HHH builders, who avoided additional labor costs by proposing projects just below 65 units, all but impossible.

It is important to note that all HHH- and ULA-funded projects are required to pay union-level, or “prevailing,” wages. This also added around 10 percent to per-unit costs. But by staying below the project labor agreement threshold, builders could use union or nonunion workers as long as they were paid at this wage level. Such flexibility opens opportunities to work on such projects up to a much larger number of contractors and workers.

Support from construction trades unions has long been a make-or-break proposition for housing bills in California. This support has, in recent years, been conditioned on the inclusion of increasingly favorable terms for these groups.

Explicit discussion of Measure ULA's project labor agreement requirement was invisible in news coverage during this election cycle. One voter's guide briefly mentioned the cost effects of included labor requirements and included a rebuttal from proponents saying that “this is the consequence of paying people well.” But it is worth noting that a requirement to use only union labor significantly reduces the pool of construction workers that could benefit from these well-paying jobs.

The revenue raised by Measure ULA may disappoint, as well. Proponents of the city's Affordable Housing Linkage Fee—a 2018 program that amounts to a tax on new market rate housing construction to fund affordable housing construction—suggested that it would raise $100 million per year. However, the actual revenue to date has been around one third (PDF) of that amount or lower (PDF).

A requirement to use only union labor significantly reduces the pool of construction workers that could benefit from these well-paying jobs.

The Fed's recent interest rate hikes are also likely to cut into the number of real estate sales—and thus cut into ULA funds.

But even taking at face value the revenue estimate given by ULA's proponents—between $600 million and $1 billion a year—they still have over-promised on housing production. Suppose annual revenue adds up to $8 billion over a decade. Around 60 percent of the funding is earmarked for the production of new housing, so that's $4.8 billion.

Producing 26,000 new units of housing implies a cost of around $185,000 per unit. That's equal to around 30 percent of the current cost of HHH projects. Instead, it approximates the costs of affordable housing produced through entirely private capital funding with no prevailing wage or union labor requirements.

Angelenos are understandably eager to have more affordable housing. But voters would be well-advised to adjust their expectations of Measure ULA because it appears to have taken exactly the wrong lesson from the experience of Proposition HHH.

Jason Ward is an associate economist at the nonprofit, nonpartisan RAND Corporation, and associate director of the RAND Center on Housing and Homelessness in Los Angeles.

This commentary originally appeared on Los Angeles Daily News on November 26, 2022. Commentary gives RAND researchers a platform to convey insights based on their professional expertise and often on their peer-reviewed research and analysis.