Proposition HHH is a $1.2 billion bond intended to produce 10,000 units of housing aimed at addressing chronic homelessness in Los Angeles. The author presents evidence that the project labor agreement attached to the initiative significantly affected project size and construction costs of HHH-funded developments. These findings may help inform future debate about how best to balance trade-offs between housing policy and labor regulations. 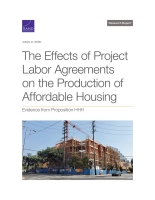 Proposition HHH is a $1.2 billion bond earmarked for the development of up to 10,000 units of affordable and permanent supportive housing aimed at addressing chronic homelessness in Los Angeles. As of May 2021, with virtually all funding committed, approximately 7,300 units of housing were in the pipeline. Failure to meet the ambitious original target has been attributed in part to higher-than-expected construction costs.

One potential reason for increased costs is a project labor agreement (PLA) added by the city council after the initiative was passed. A PLA specifies rules concerning hiring, worker ratios by union status and experience, strikes and work stoppages, grievance and arbitration procedures, and targeted hiring provisions for local and disadvantaged workers. Critics say PLAs directly increase costs by disincentivizing bidding on projects and reducing contractor flexibility. Advocates argue that they lower costs through timely completion of projects and increase competitiveness by leveling the playing field for union contractors.

The author presents evidence that the HHH PLA increased construction costs on larger, affected projects by approximately 15 percent. Additionally, developers responded to the PLA by disproportionately proposing smaller projects that would not fall under the agreement. A simulation exercise considering these effects together estimated that approximately 800 more units of housing would have been produced in the absence of the agreement. This evidence may inform future debates about combining large-scale housing policy with restrictive labor regulations.

Developers responded to the HHH PLA, which affects projects with 65 or more housing units, by disproportionately proposing projects below this threshold

The research described in this report was funded by the Lowy family and conducted by the Center for Housing and Homelessness in Los Angeles (CHHLA), part of the Community Health and Environmental Policy Program within RAND Social and Economic Well-Being.