The Age of Uncrewed Surface Vessels 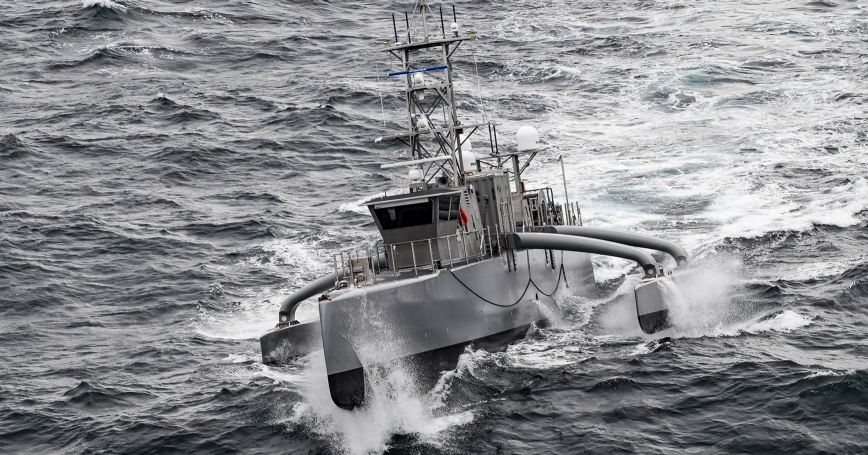 A new age of naval warfare has been inaugurated in the Black Sea, defined by an emerging weapon. Ukraine has employed explosive uncrewed surface vessels (USVs) as formidable weapons against Russian fleets and even infrastructure. Like prior transformative weapons such as torpedoes and anti-ship missiles, USVs could have a large impact on future naval tactics, equipment, and even the design of fleets.

The idea of using explosive USVs to target ships is not wholly new; a RAND Corporation report described such attacks a decade ago. However, the technology has now matured to the point that explosive USVs can be effectively employed in war. Like kamikaze uncrewed aerial vehicles (UAVs), whose capabilities have also been demonstrated by this war, USVs have only begun to reshape future warfare.

There are two reasons why USVs can be much more dangerous to ships than aerial weapons: where they strike and the scale of their explosive payloads. Contrary to popular belief, well-built warships and large commercial ships can sometimes withstand substantial damage inflicted by missiles, bombs, and kamikaze UAVs. While the Russian warship Moskva succumbed to a missile attack, warships with greater redundancy and damage-control capabilities can sometimes stay afloat and even continue fighting.

There are two reasons why USVs can be much more dangerous to ships than aerial weapons: where they strike and the scale of their explosive payloads.

A USV, however, strikes at the waterline, and can carry a larger payload than a vehicle that needs to be flown through the air. Such an attack can damage critical portions of the ship well below the superstructure, such as engines and munition-storage areas, potentially causing secondary detonations. Creating a massive gash at the waterline also ensures substantial flooding. The magnitude of this threat was demonstrated by the explosive boat attack on the USS Cole in 2000. While that ship survived due to its damage-control capabilities and the sheer heroism of its well-trained crew, it was in no condition to fight.

Explosive USVs can also be inexpensive enough that large numbers can be used. Recreational or small fishing vessels only need to have some sensors, explosives, and IT systems installed before they are painted in dark colors. Explosive USVs are also versatile, able to be launched from piers or large ships. If desired, they can linger indefinitely in unobtrusive places before they stealthily approach their targets, then strike in numbers that overwhelm the defenders' ability to respond effectively.

Some aspects of explosive USV capabilities echo those of prior weapons. Wooden navies frequently used “fireships”—old ships that were set aflame and allowed to drift into enemy fleets—in contexts ranging from third-century China to the American Civil War. While fireships were easy to detect, they were difficult to avoid in confined waters, particularly when ships were crowded together. More recently, crews willing to sacrifice their own lives in the process have crashed explosive vessels into larger ships, as in the previously mentioned attack on the USS Cole. USVs also bear some similarity to drifting mines and even torpedoes, as stealthy weapons that can rip ships apart at or below the waterline.

What sets USVs apart from these earlier weapons is that they combine three attributes. The first is the ability to be guided to a target or to autonomously seek it out, without requiring individuals to deliberately sacrifice themselves. This makes them useful in open waters, and gives them the ability to be used in coordinated swarms. The second is that they can conduct long-range strikes, traversing dozens or hundreds of miles before their fuel tanks run out. The third is that they can deliver larger explosive payloads than a mine or torpedo.

The age of explosive USVs is just beginning. Navies that can effectively use these systems could have a great advantage over their adversaries.

One question that observers may be asking is why Ukraine has used explosive USVs, rather than uncrewed undersea vehicles (UUVs). By operating below the waterline, UUVs have an obvious advantage in terms of stealth. Moreover, striking below the waterline can be especially damaging. However, UUVs have a few disadvantages relative to USVs. They lose access to the electromagnetic spectrum below the waterline, limiting their ability to communicate and to accurately navigate. A UUV has a smaller payload than a USV of comparable size. UUVs' ranges and speeds are constrained by greater hydrodynamic drag and an inability to burn energy-dense fossil fuels underwater (though some can surface and use engines to recharge their batteries). While UUVs may someday be used to launch anti-ship attacks, USVs remain more desirable for a range of reasons.

The age of explosive USVs is just beginning. Navies that can effectively use these systems could have a great advantage over their adversaries. A classic cycle of measures and counter-countermeasures will likely begin. For example, fleets may use sensor-studded UAVs to detect and target explosive USVs at appreciable ranges, even as the USVs become increasingly stealthy and numerous. UAVs could distribute propeller-entangling fibers in the paths of incoming USVs, until USVs are designed that can overcome them.

Regardless of the specific measures used by both sides, explosive USVs could become a centerpiece of naval warfare in the coming decades, one that navies may ignore at their peril.