What's the Harm in Talking to Russia? A Lot, Actually 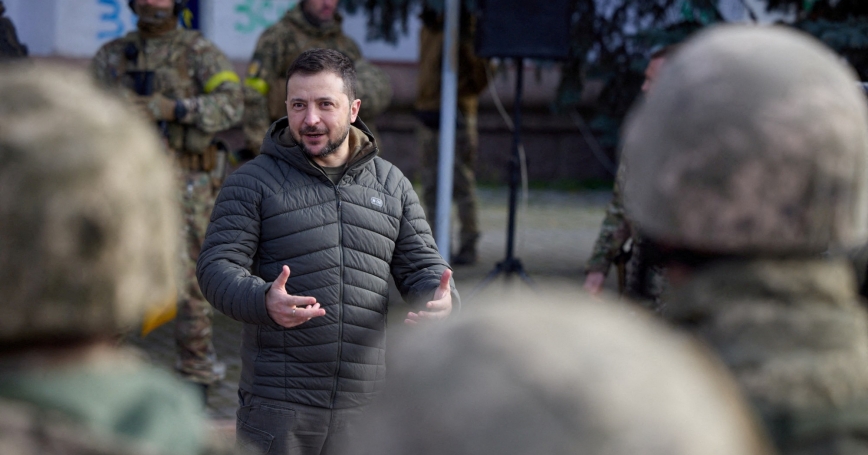 “Give diplomacy a chance.” This phrase gets repeated in almost every conflict, and the war in Ukraine is no exception. A chorus of commentators, experts, and former policymakers have pushed for a negotiated peace at every turn on the battlefield: after the successful defense of Kyiv, once Russia withdrew to the east, during the summer of Russia's plodding progress in the Donbas, after Russia's rout in Kharkiv oblast, and now, in the aftermath of Russia's retreat from Kherson. The better the Ukrainian military has done, the louder the calls for Ukraine to negotiate have become.

And today, it's no longer just pundits pushing for a negotiated settlement. The U.S. House of Representatives' progressive caucus penned a letter to President Joe Biden calling for a diplomatic solution, only to retract it a short time later. Republican House leader Kevin McCarthy has promised to scrutinize military aid to Ukraine and push for an end to the war. Even Joint Chiefs of Staff Chairman Mark Milley has reportedly pushed for Ukraine to negotiate, although he subsequently made clear that the decision should be Kyiv's alone.

And why not negotiate? Isn't a diplomatic solution the best—indeed, the only—option for any kind of long-term settlement between Russia and Ukraine? And if so, what could possibly be the harm in exploring those options? Quite a lot, actually: Despite the way it is commonly portrayed, diplomacy is not intrinsically and always good, nor is it cost-free. In the Ukraine conflict, the problems with a push for diplomacy are especially apparent. The likely benefits of negotiations are minimal, and the prospective costs could be significant.

Despite the way it is commonly portrayed, diplomacy is not intrinsically and always good, nor is it cost-free.

First, the argument that most wars end with diplomacy and so, therefore, will the war in Ukraine is misleading at best. Some wars—such as the U.S. Civil War and World War II—were fought to the bitter end. Others—like the American Revolution, the Spanish-American War, World War I, or the First Gulf War—were won on the battlefield before the sides headed to the negotiating table. Still others—like the Korean War—ended in an armistice, but only after the sides had fought to a standstill. By contrast, attempts at a diplomatic settlement while the military situation remained fluid—as the United States tried during the Vietnam War and more recently in Afghanistan—have ended in disaster. Even if most wars ultimately end in diplomatic settlements, that's not in lieu of victory.

At this particular moment, diplomacy cannot end the war in Ukraine, simply because Russian and Ukrainian interests do not yet overlap. The Ukrainians, understandably, want their country back. They want reparations for the damage Russia has done and accountability for Russian war crimes. Russia, by contrast, has made it clear that it still intends to bend Ukraine to its will. It has officially annexed several regions in eastern and southern Ukraine, so withdrawing would now be tantamount, for them, to ceding parts of Russia. Russia's economy is in ruins, so it cannot pay reparations. And full accountability for Russian war crimes may lead to Russian President Vladimir Putin and other top officials getting led to the dock. As much as Western observers might wish otherwise, such contrasts offer no viable diplomatic way forward right now.

Nor is diplomacy likely to forestall future escalation. One of the more-common refrains as to why the United States should give diplomacy a chance is to avert Russia making good on its threats to use nuclear weapons. But what is causing Russia to threaten nuclear use in the first place? Presumably, it is because Russia is losing on the battlefield and lacks other options. Assuming that “diplomatic solution” is not a euphemism for Ukrainian capitulation, as its proponents insist, Russia's calculations about whether and how to escalate would not change. Russia would still be losing the war and looking for a way to reverse its fortunes.

Diplomacy can moderate human suffering, but only on the margins. Throughout the conflict, Ukraine and Russia have negotiated prisoner swaps and a deal to allow grain exports. This kind of tactical diplomacy on a narrow issue was certainly welcome news for the captured troops and those parts of the world that depend on Ukrainian food exports. But it's not at all clear how to ramp up from these relatively small diplomatic victories. Russia, for example, won't abandon its attacks on Ukrainian infrastructure heading into the winter as it attempts to freeze Ukraine into submission, because that's one of the few tactics Russia has left.

Pushing Ukraine to negotiate now signals to the Russians that they can simply wait out Ukraine's Western supporters, thereby protracting the conflict.

At the same time, more-expansive diplomacy comes at a cost. Pushing Ukraine to negotiate now sends a series of signals, none of them good: It signals to the Russians that they can simply wait out Ukraine's Western supporters, thereby protracting the conflict; it signals to the Ukrainians—not to mention other allies and partners around the world—that the United States might put up a good fight for a while but will, in the end, abandon them; and it tells the U.S. public that its leaders are not invested in seeing this war through, which in turn could increase domestic impatience with it.

Starting negotiations prematurely carries other costs. As Biden remarked in June: “Every negotiation reflects the facts on the ground.” Biden is right. Ukraine now is in a stronger negotiating position because it fought rather than talked. The question today is whether Ukraine will ultimately regain control over Donbas and Crimea, not Kharkiv and Kherson. This would not have been the case had anyone listened to the “give diplomacy a chance” crowd back in the spring or summer.

There are plenty of reasons to believe that Kyiv will be in an even stronger bargaining position as time passes. The Ukrainians are coming off a string of successes—most recently retaking Kherson—so they have operational momentum. While Ukraine has suffered losses, Western military aid continues to flow in. Despite Russia's missile strikes on civilian infrastructure, Ukrainian morale remains strong. By contrast, Russia is on the back foot. Its military inventories have been decimated, and it is struggling to acquire alternative supplies. Its mobilization effort prompted as many Russian men to flee the country as were eventually mobilized to fight in Ukraine. Moreover, as the Institute for the Study of War has assessed (PDF), “Russian mobilized servicemen have shown themselves to be inadequately trained, poorly equipped, and very reluctant to fight.”

By contrast, a negotiated settlement—even if it successfully freezes a conflict—comes with a host of moral, operational, and strategic risks. It leaves millions of Ukrainians to suffer under Russian occupation. It gives the Russian military a chance to rebuild, retrain, and restart the war at a later date. Above all, a pause gives time for the diverse international coalition supporting Ukraine to fracture, either on its own accord or because of Russian efforts to drive a wedge into the coalition.

Eventually, there will come a time for negotiations. That will be when Russia admits it has lost and wants to end the war. Or it will come when Ukraine says that the restoration of its territory isn't worth the continued pain of the Russian bombardment. So far, neither scenario has come to pass. Indeed, the only softening of Russia's position was Putin's statement last month seemingly ruling out nuclear use—at least for the time being. Apart from that, the Kremlin seems intent on doubling down, even as its military continues to be slowly pushed out of Ukraine. That's hardly an invitation to negotiate.

If diplomacy means ramming through a settlement when the battlefield circumstances dictate otherwise, it is not necessarily the morally more-justifiable or strategically wiser approach.

Might these arguments against the reflexive call for negotiations mean that war continues for months and possibly even years? Perhaps. But it's not yet clear that there is a viable diplomatic alternative. And even if there was, it should be Ukraine's choice whether or not to pursue it. Ukraine and its people, after all, are paying the price in blood. If the United States and its allies are sending tens of billions of dollars in military and economic aid to Ukraine, this is only a tiny fraction of what Washington has recently spent on defense and other wars. Thanks to the Ukrainians' excellent use of this aid, the military threat from the United States' second-most important (PDF) adversary (PDF) has been dealt a serious blow. The cold, if cruel, reality is that the West's return on its investment in Ukraine seems high.

The harshness of these realities, however, does not make current calls for a negotiated settlement intrinsically moral. If diplomacy means ramming through a settlement when the battlefield circumstances dictate otherwise, it is not necessarily the morally more-justifiable or strategically wiser approach. Sometimes fighting—not talking—is indeed the better option.

“To everything there is a season,” Ecclesiastes says, including “a time of war, and a time of peace.” There will come a time for diplomacy in Ukraine. Hopefully, it will come soon. But it doesn't seem to be today.

This commentary originally appeared on Foreign Policy on November 22, 2022. Commentary gives RAND researchers a platform to convey insights based on their professional expertise and often on their peer-reviewed research and analysis.