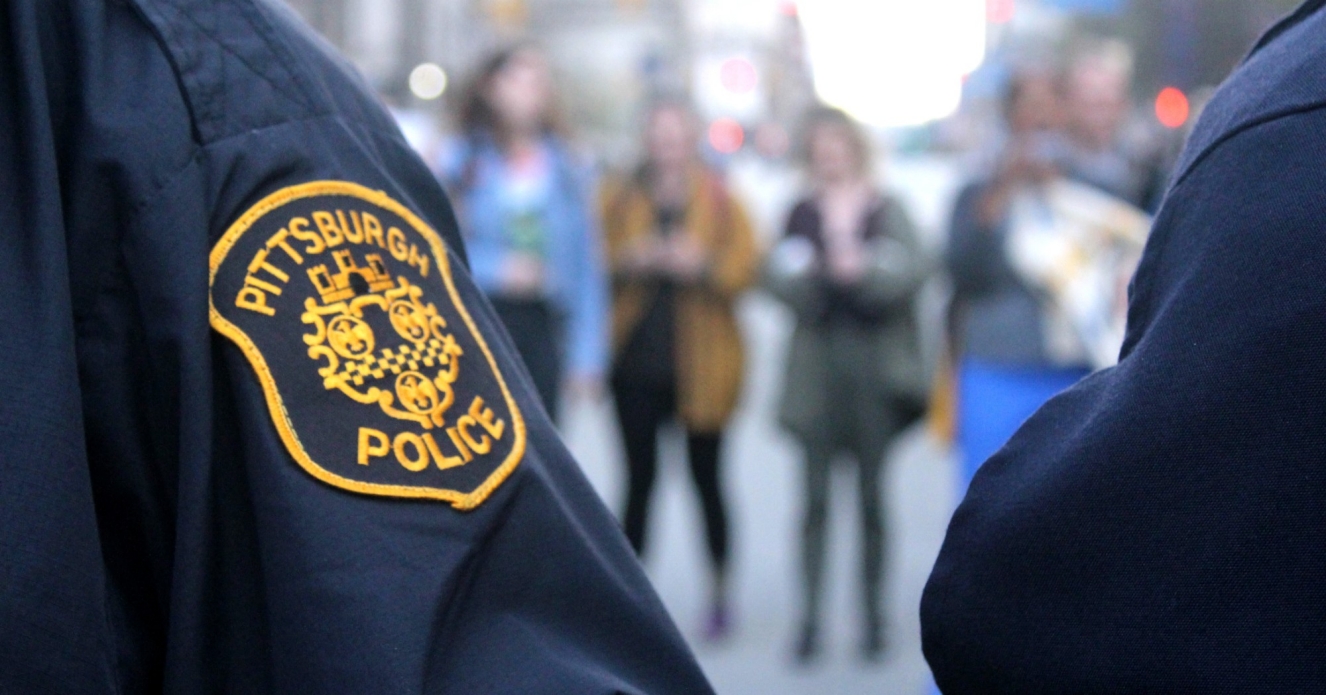 Pittsburgh police officers standing with crowd of students on the University of Pittsburgh campus.

Which police interventions work best in certain situations, and which don't? A new RAND resource helps police choose the best strategies—and put them to work.

Leonard Hammonds II walks through downtown Pittsburgh as a police volunteer, keeping an eye out for signs of trouble. He says he draws on his experience as a U.S. Marine to maintain a vigilant eye. But just as often, his teenage involvement with the Crips gang plays a role.

Hammonds says he volunteers by just "walking, talking. Just being there, really. Maybe catching up with some guys who knew me from back in the day. Or joking with some kids. Watching. Looking out."

"People love this," says Pittsburgh police volunteer coordinator Cornell Jones, referring to Hammonds. "They talk to him in ways they won't talk to us."

Hammonds is a member of a growing volunteer program coordinated by Jones that is part of a broader policing strategy to reduce gang-related gun violence. This strategy, called “focused deterrence,” is an effective way police can accurately identify and deal with high-risk offenders. Focused deterrence is used by the Pittsburgh police’s Group Violence Intervention Unit (GVI) in its efforts to reduce gun violence. It’s also one of the policing strategies detailed in a new resource developed by the RAND Corporation.

The GVI unit trains and works with Hammonds and more than a dozen other volunteers. They help spot potential troublemakers at big city events, such as Light-Up-Night, Pittsburgh's celebration of the beginning of the winter holidays.

"Leonard is trained [by police] to watch for potential suspects and disturbances," explains Jones. "But he brings much more than training to the job. When he's out in the community, he's really there—physically, spiritually, emotionally. His work makes our work in crowds easier."

Focused deterrence isn't new—it was pioneered by Boston police in the mid-1990s during the groundbreaking Operation Ceasefire, which targeted chronic violent offenders and is credited with helping reduce the city's youth homicide rate. As part of focused deterrence, police intervene with high-risk groups and individuals with the aim of preventing future violence.

There are over 18,000 police agencies in this country. There is no national database or single objective source showing them what works best and how to do it. We wanted to change that.

Given that evidence shows that focused deterrence is successful, why don’t more police departments use it?

"There are more than 18,000 police agencies in the United States," explains John Hollywood, a senior RAND researcher who has extensively studied law enforcement and criminal justice. "But there is no national database or single objective source showing them what works best and how to do it. We wanted to change that."

That’s where RAND’s Better Policing Toolkit comes in. It's designed to help law enforcement agencies find and learn about effective strategies and put them into action.

The toolkit could be a valuable resource for police in a climate where effective policing strategies are more needed than ever.

A wave of racially charged incidents throughout the country—including a fatal shooting just outside the city of Pittsburgh in June—has triggered tension and distrust among some communities and their police forces.

“Mutual trust and respect are critical components to better policing,” Hollywood says. “Building strategies around this notion is important not only for improving relationships within our communities, but also for making them safer places to live.”

Have specific police strategies worked (or not worked) for your department?

"We've also found examples of what to do and what not to do when putting these strategies into place."

Explore the Most Effective Policing Strategies in the Better Policing Toolkit

Intervene with high-risk people and groups

Focus on community relations and trust

Sergeant Jim Glick, head of the GVI unit in Pittsburgh, says the police response to gun crime was very different before adopting focused deterrence. "One incident would bring a flood of officers in flashing cars as well as traffic safety, narcotics, and other units into the neighborhood. We weren't seeing results from this, and specific neighborhoods were feeling targeted. We knew it was time to commit to other measures."

Violent players in most communities make up less than 1 percent of the population. The trick is to find these people—usually only 15 to 20 individuals—and get them to stop.

In contrast, Glick says focused deterrence is a "scalpel approach" to crime. "Violent players in most communities make up less than 1 percent of the population. The trick is to find these people—usually only 15 to 20 individuals—and get them to stop."

To locate this 1 percent, police focus on groups. Like many U.S. cities, Pittsburgh has informal, loosely organized groups that occasionally commit crimes together, as well as more formal, structured gangs. "If we don’t catch individuals immediately, we can usually find out who they are through their contacts. We may already be holding one of their friends," says Glick.

Once police have identified a suspect, an officer will visit him or her as well as his or her parents or grandparents. According to Glick, the visiting officer says, "'We know what’s going on. You—or your son or grandson—is a shooter.' Either way, we let the party know that we are going to address this right here and now."

According to RAND research, key aspects to the success of these focused deterrence techniques include having logical and defensible criteria for selecting subjects, and letting them know why the intervention is happening and what the consequences are for further misbehavior.

If the potential offender continues committing gun crimes, they are likely to face tough charges if caught. But if they are ready to change, there are multiple resources ready to help.

"We want to give everyone an opportunity to make a better life if they want to," explains Jones. "New targeted suspects or former convicted prisoners—we try to meet all of them where they are."

The GVI unit works with job training and placement programs, local faith-based organizations, mental health experts, and multiple family- and housing-related services to help suspects change their lives—in Jones's words, "to leave the life." Tattoo removal services are also offered if needed, because, "It's hard to get any job if you have 'thug life' tattooed on your forehead."

People want our efforts to work and the violence to stop. But they also know that change isn't a spectator sport.

Pittsburgh police say that two early indicators may show that the focused deterrence effort is working to reduce gang-related gun violence. First, gun crimes have decreased. According to Glick, gun violence in the city has fallen by over 25 percent in the past year.

The second is the growing number of volunteers like Hammonds. "Hope is contagious," says Jones. In fact, the GVI unit has more offers for assistance than it needs. "We've got former offenders, church folk, veterans—all want to help. But not everyone can work on the street. We are trying to find the right role for everyone."

Jones says: "People want our efforts to work and the violence to stop. But they also know that change isn't a spectator sport."

For any police agency, adopting a new strategy requires trust and collaboration between police and the community. Knowing what strategy works best in which circumstances can be the first step to success.

The research on which this article is based was conducted by RAND researchers. The full report, Better Policing Toolkit (by John S. Hollywood, Andrew Lauland, Dulani Woods, and Kenneth N. McKay 2018), was peer reviewed and published to RAND.org; it is free to read online or download for personal use. Learn more about RAND copyright and permissions.

This research is a RAND Venture. Funding was provided by gifts from RAND supporters and income from operations. Additional support to the project came from a Strategies in Policing Innovation grant to the City of Chicago awarded by the Bureau of Justice Assistance, a component of the Office of Justice Programs, in cooperation with the Chicago Police Department and City of Chicago. Points of view or opinions in this document are those of the authors and do not necessarily represent the official position or policies of the U.S. Department of Justice.