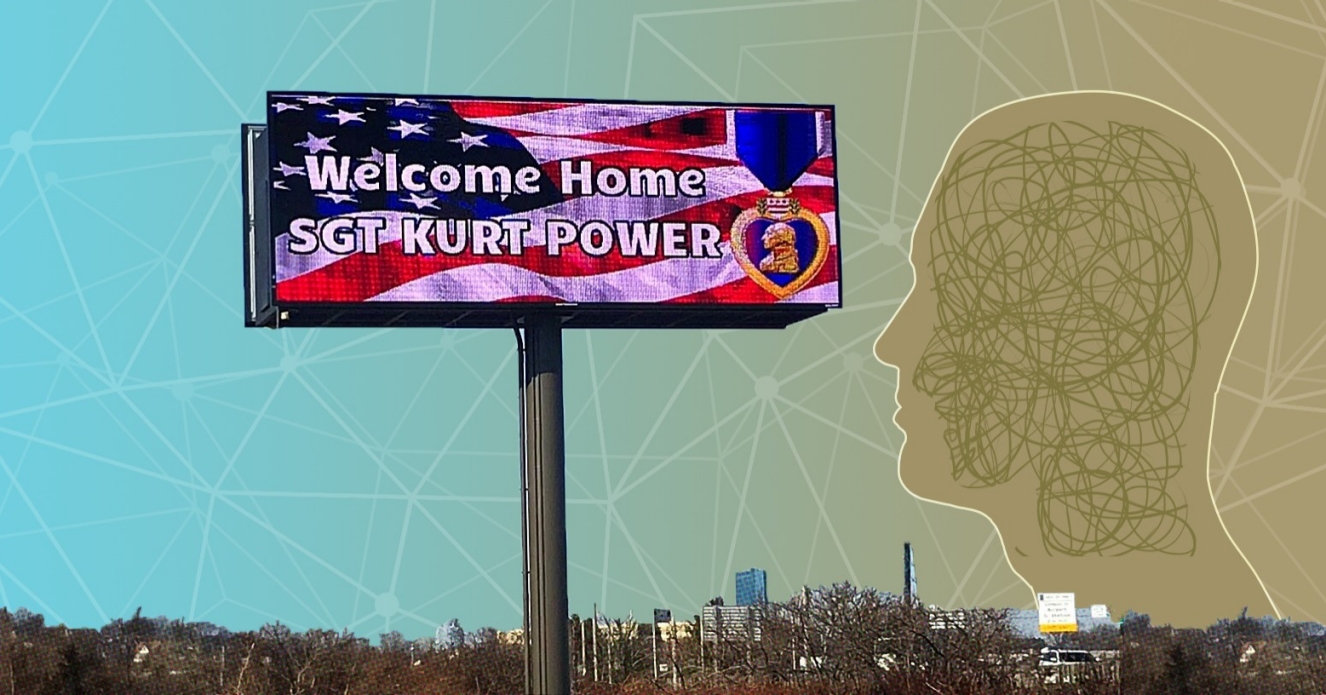 One in five U.S. veterans of Iraq and Afghanistan experience posttraumatic stress disorder or major depression. Mental health care can help, but veterans may face several obstacles. And even for those who receive care, recovery hinges on whether the treatment is high-quality.

Army Sergeant Kurt Power was ready to serve his country when he volunteered to deploy to Ramadi, Iraq, back in 2005. He was ready to endure some of the war’s most dangerous combat. He was even ready to take the sniper’s bullet that nearly killed him.

But as Power arrived safely at Boston Logan International Airport one year later—11 pieces of shrapnel from that bullet still lodged in his chest—he realized that he wasn’t ready to survive civilian life.

Sergeant Kurt Power after surviving a sniper's bullet during his deployment to Ramadi, Iraq, in 2005

“I got hit with something I had never felt—and that was fear,” Power said. “I never expected I would make it, so I never thought I’d have to be the person I was before the war. My family all expected me to be him, and that person no longer exists. I’m not the same. And I felt like I didn’t belong here anymore.”

For years, Power accepted those feelings as his new normal. He’s not alone.

Two years after Power returned home, a landmark RAND report revealed that one in five U.S. veterans of Iraq and Afghanistan experience the “invisible wounds” of posttraumatic stress disorder (PTSD) or major depression.

Only slightly more than half of veterans who receive treatment get minimally adequate care.

The study found that roughly half of those who need treatment for these conditions seek help, but only slightly more than half who receive treatment get minimally adequate care.

That’s because veterans often face a winding path to recovery. They must navigate a tangled web of providers that often fails to consider veterans’ unique needs, as well as treatment options that may fall short when it comes to quality.

Still, there’s hope. A growing body of RAND research shows that veterans who receive high-quality care have the best chance of improving their mental health outcomes.

What Prevents Veterans from Receiving Care?

Several factors make it hard for veterans to get the treatment they need. One of the roadblocks that may hold them back is simply not recognizing that they could benefit from help. But even if a veteran is willing to take the first step, they often face a suite of barriers that can make things difficult.

There are career-related concerns. Some veterans wonder: “If I’m diagnosed with something, will my employer know, and will that affect my job? If I get a prescription, will it interfere with my job eligibility?”

Attitudes ingrained in military culture—such as the false notion that seeking help is a sign of weakness—can also stand in the way.

Then there’s the sometimes daunting question of where to seek treatment.

Veterans who are eligible could seek services through the Department of Defense or the Department of Veterans Affairs. Some community-based programs are available to all veterans, regardless of their ability to pay. And there are additional options for veterans with employer-sponsored health insurance, including treatment through the local private sector.

Even once veterans decide they’re ready and have an idea of where they’d like to receive treatment, there are logistical barriers.

For example, cost can be a concern, especially for veterans who don’t have health insurance. For those in rural areas, drive times to facilities can be long. And appointment wait times can sometimes be up to two or three months long.

Power was able to clear several of these hurdles and receive treatment—but that was after drifting through life in a haze for years.

He would sleep only once every three days. And when he did, vivid nightmares of his experiences in Ramadi would jolt him awake in a cold sweat. He’d shower, go back to bed, and repeat.

Then, five years to the day after Power was shot, he says he woke up and realized he needed help.

"Every day was so painful that I needed to talk to someone, because it wasn’t going away."

"I remember getting out of the shower, looking at the scar on my chest," Power said. "I had not only forgotten I was shot, I forgot I was ever even in the war. I guess it was my mind's way of trying to cope. Obviously I wanted to live, but I knew I couldn't continue to live this way. Every day was so painful that I needed to talk to someone, because it wasn't going away."

But for veterans like Power who make the decision to see a provider, recovery hinges on whether the treatment they’re about to receive is high-quality.

That isn’t always the case.

“Unfortunately, it’s easy for a veteran to walk into a situation where they aren’t getting evidence-based treatment,” Tanielian said.

What Is High-Quality Care?

High-quality health care is care that is safe, effective, equitable, timely, efficient, and patient-centered—which for veterans means that it considers issues unique to military experience.

The goal is to determine whether there is strong, moderate, or weak evidence that a given treatment produces its intended result under ideal circumstances for a specific condition. Strong evidence means that the treatment is associated with better results than the status quo or a placebo. If care is evidence-based, that means we can be confident that it will help with veterans’ recovery.

RAND researchers have also applied this approach to assessing veterans’ ability to access high-quality care, and providers’ quality of delivery.

“The usual state of care in the United States is that most people will not get one of the most effective treatments,” Tanielian said. “There is great variability across settings and providers in the application of evidence-based techniques. Ideally, providers would offer what we know is going to work, because if we deliver something that is not, we just get frustrated patients.”

Once he realized he needed help, he called Home Base, a partnership between the Red Sox Foundation and Massachusetts General Hospital dedicated to providing care for post-9/11 veterans, service members, and their families.

Power’s first contact was with a fellow combat veteran and Purple Heart recipient—an instant sign that he had come to the right place, he said.

He also learned techniques to help cope with his survivor’s guilt, to talk about his feelings, and to manage stress.

It took him only one appointment to start feeling better. By six months, he felt like he had recovered.

“Every day of my life is better because of that program,” Power said.

Power sharing his story at an event hosted by Home Base, the program that helped him recover from PTSD

There are systemic issues that providers and policymakers can address to make sure that more veterans in need end up like Power and receive high-quality care.

“We need to focus on bolstering the capacity of the system—making sure we have enough providers who are trained in delivering evidence-based approaches,” Tanielian said. “And we need to focus on increasing existing providers’ capabilities so that they have the right tools in their toolbox and that they’re inclined to routinely use these approaches.”

Policymakers could also focus on removing many of the barriers that veterans face.

For instance, addressing concerns about career repercussions for seeking care would require changes to military or security-clearance policies. And policymakers could encourage the use of evidence-based, high-quality treatment by setting and enforcing consistent standards across all payers for mental health services.

“The takeaway is that it’s going to take multiple approaches,” Tanielian said. “It’s not just about public education and improving attitudes. It’s about ensuring that the mental health system is equipped and held accountable.”

And while there has been a focus within the VA on making high-quality care more accessible, it’s important for the private sector to do so as well. (That would have the added bonus of improving the lives of non-veterans.)

Veterans should ask their providers questions such as “What’s the evidence?” and “How do you know this will work?”

In the meantime, there are ways that veterans can take quality of care into their own hands.

According to Tanielian, veteran patients should ask their providers questions such as “What’s the evidence?” and “How do you know this will work?”

As for Power, today he feels better than ever. He's thriving as a detective in Boston's Youth Violence Strike Force, where he works to curb gang violence.

And in his free time, Power is doing his part to bridge the gap between other veterans and high-quality treatment, sharing his story at speaking engagements and through outreach with Home Base.

“Every veteran will have a moment of clarity when they realize they need help,” Power said. “But if they don’t pounce on it, it will pass. I just need to get them through the door.”

From there, veterans’ quality of care—and the potential to improve their lives—is in the hands of providers and policymakers.

This article was made possible, in part, by the Zwick Impact Fund. A list of the peer-reviewed RAND research summarized above is available here.

Charles Zwick—a researcher at RAND from 1956 to 1965 who later served as both a trustee and an advisory trustee—presented RAND Ventures with $1 million and the charge to take on new and emerging policy challenges and to support top talent in their focus on these issues. Each year, RAND’s president and CEO draws on this generous gift to help RAND research and outreach teams extend the impact of completed research.