Childhood Trauma Is More Common Than You Think. This School-Based Intervention Can Help 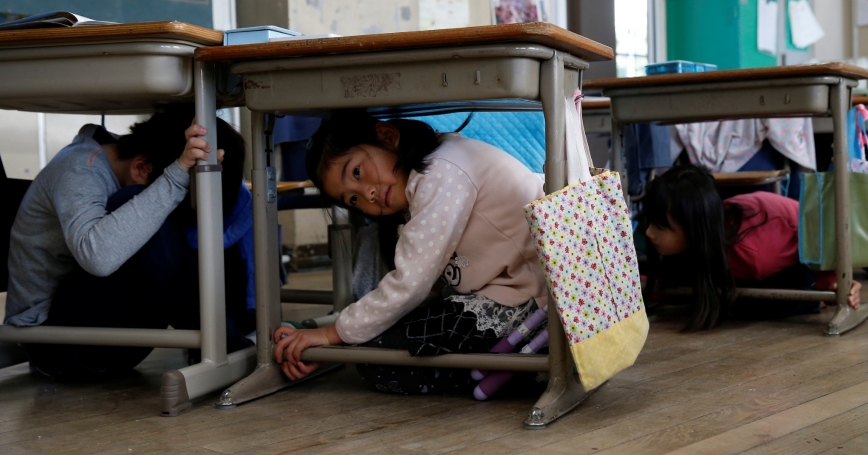 Children take shelter under desks during an earthquake simulation in an evacuation drill in Tokyo, Japan, March 10, 2017

She was six years old when her baby brother died in his sleep. She remembers her aunt shaking her awake, the ambulance outside, her mother crying downstairs—and a thought that has haunted her ever since. Could she have done something to save her brother?

She gives her name as Rebecca, but that's not her real name. It's still hard for her to talk about this, and she wants some privacy. She's 16 years old now, a student leader at her school in New Orleans, a member of the marching band, still scarred by the loss of her brother. “Sometimes I just break down,” she says, “and I find myself in a place I don't want to be.”

Rebecca is part of a school program, developed at RAND, to help children exposed to trauma confront and subdue their stress and anxiety. It grew out of the street violence of South Los Angeles in the 1990s and has since helped children from Newtown, Conn., to Fukushima, Japan. Researchers are now tailoring it for children whose lives were upended by the hurricanes that devastated Puerto Rico.

“It made me feel like I have somebody to talk to,” Rebecca says. “It made me realize everything is not as hard as you think it is. You've just got to sit there and really talk it over with yourself.”

Too Many Children Are Exposed to Violence

Exposure to trauma, research has shown, is more the rule for children than the exception. One study found that nearly two-thirds of children had experienced or witnessed violence, crime, or abuse in the past year. Another estimated that more than a third had endured a physical assault. Many more live through natural disasters, witness violence in their communities or, like Rebecca, suffer a traumatic loss.

Those childhood traumas have been linked to poorer academic performance, decreased reading ability, and lower high school graduation rates, as well as mental and physical health problems later in life. And yet the effects of trauma—including post-traumatic stress disorder (PTSD), anxiety, and depression—often go undiagnosed in children.

“These are kids who are just sitting in math class, and then when we ask them about trauma exposure and symptoms, it turns out that they have both,” said Lisa Jaycox, a senior behavioral scientist at RAND. “Quite a large number do, many more than you'd think. They're still in school. They're just suffering in silence.”

One of the First Programs for Childhood Trauma

In the 1990s, South Los Angeles was an epicenter of childhood trauma. Crisis teams working in the hardest-hit schools would ask children if they had seen gang assaults, shootings, or death. “Every single kid said yes,” said Marleen Wong, then the director of mental health services for Los Angeles schools. “Every single kid.”

Wong knew a researcher at RAND named Bradley Stein. Over lunch one day, she issued him a challenge: What can we do about this? They started jotting ideas down on a napkin.

Over the next several years, Stein and Jaycox on the RAND side, working with Wong and her team on the school side and some researchers from UCLA, put together one of the first programs for children exposed to trauma. They called it CBITS, for Cognitive Behavioral Intervention for Trauma in Schools.

It would be delivered in the schools themselves, by staff psychologists or social workers, so that children wouldn't need to find a ride to a therapist's office. It would be rigorous, backed by research, open to evaluation. And it would work in real schools, with real students. The school officials made sure of that—pointing out, for example, that every session had to take no more than 45 minutes, so kids could get to their next class.

CBITS aims to catch children before they develop signs of clinical PTSD or anxiety—while they're still sitting in math class, suffering in silence. It teaches them to process their traumas and challenge their distressing thoughts. A program manual describes trauma as standing at the edge of a cliff. Spend enough time there, and you can learn to relax and feel comfortable, even though you recognize there's still a cliff there.

Trauma is like standing at the edge of a cliff. Spend enough time there, and you can learn to relax, even though you know there's still a cliff.

The program had its first test run with immigrant children in Los Angeles schools who spoke Russian, Spanish, Armenian, and Korean. Some had fled civil wars in their home countries. The program helped, and so in 2001–2002 the district expanded it to two middle schools, for any student who needed it. Three-quarters of the students who enrolled said they had witnessed or experienced violence involving a knife or gun.

The program significantly lowered PTSD and depression scores in the children who went through it, compared with a wait-listed group who had not yet.

In another study, researchers offered either CBITS or traditional clinical therapy to children who had survived Hurricane Katrina. More than 90 percent of the children in school-based CBITS finished the program, with marked improvement in PTSD and depression symptoms. Only 15 percent of those who had to go to clinics did.

“It turns out that, even though it's painful, people do want to talk about what happened to them,” Jaycox said. “They do want to share it, and they do want to get support for it.” 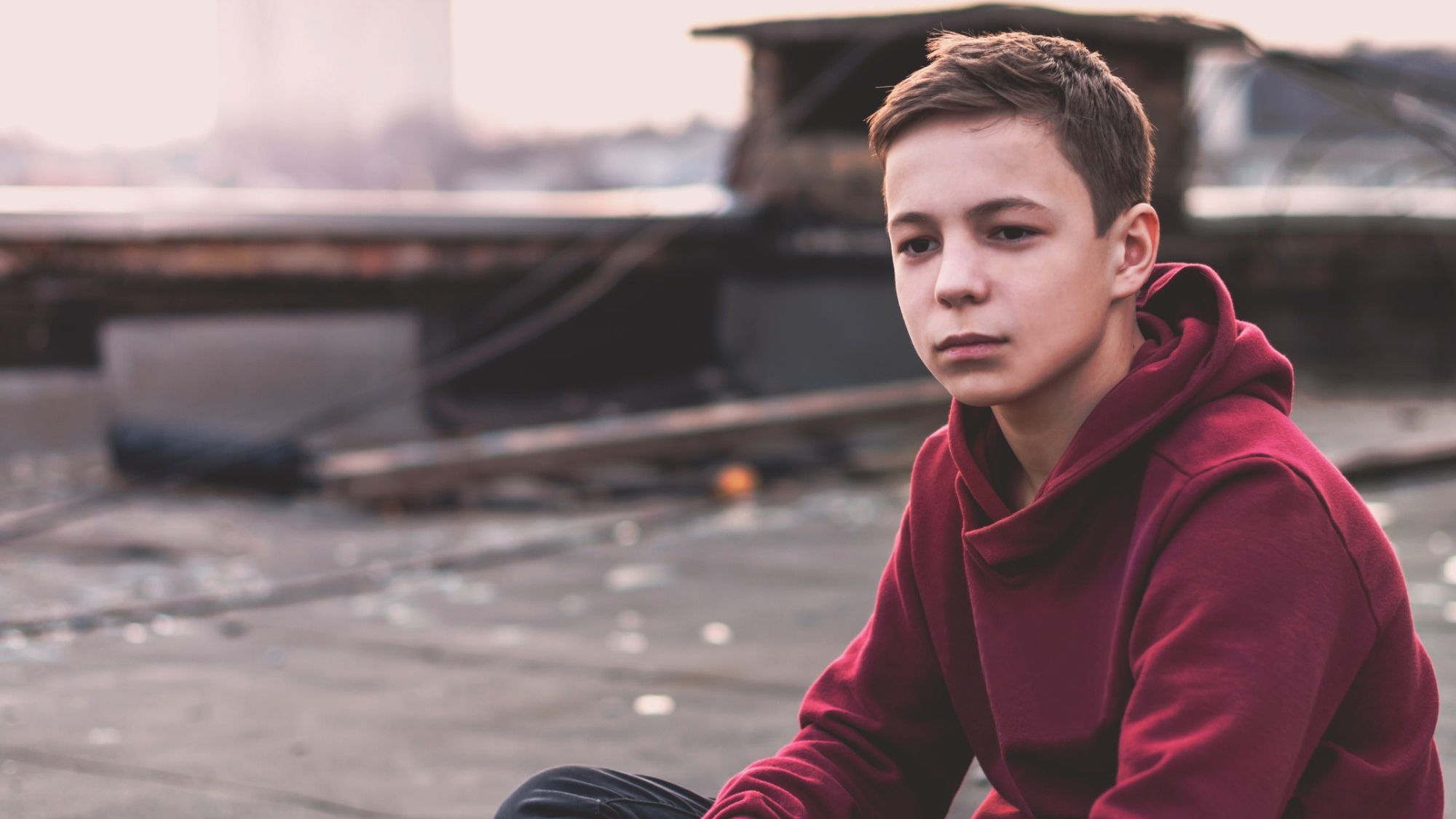 Rebecca wasn't so sure at first. The memory of that night her brother died was never far from the surface—the helpless feeling of not knowing how to comfort her mom, the awful fear that she could have done something to save him. She kept to herself in the first CBITS group sessions she attended, listening to other students share their stories.

But then she realized they were there for each other, shoulders to lean on. She wrote about her trauma in poems and stories, and realized she could shape the narrative however she wanted. She learned to relax her muscles whenever she came up to the cliff.

“It was a place where everybody could just talk,” she says. “Everybody was like a family up in there. It made me realize that I'm a teenager who really went through something, but I can still get out in the world.”

Over the years, the researchers have adapted CBITS to work with youth in foster care, special education, and faith-based settings. They have spun off two new programs based on CBITS, one aimed at younger children, another designed to be led by teachers or other school staffers without clinical training. They recently released an updated manual for the core CBITS program. The National Child Traumatic Stress Network and the National Institutes of Health have sponsored their work.

RAND and its partners make the program manuals and training materials available for free at cbitsprogram.org. It's hard to say how many schools have used the program, but around 2,000 clinicians attend formal training sessions every year.

The communities they come from read like an almanac of crisis and disaster. Houston, after Hurricane Harvey swept through in 2017. Sonoma County, Calif., after wildfires burned whole neighborhoods to the ground. Las Vegas, after the deadliest mass shooting in modern U.S. history. New Orleans, Newtown, South Korea, Japan. Soon, Puerto Rico.

“I wish this was research that would no longer be needed,” said Stein, now a senior physician policy researcher at RAND. “I would love to be put out of this line of business. If this was no longer a need, that would be fantastic.

“But we're not there. And sadly, it doesn't look like we're any closer than we were two decades ago. When these things happen, and you have children exposed to trauma and violence, at least we can be ready to meet their needs and help them through it.”