How Citizen Scientists Are Protecting Their Communities 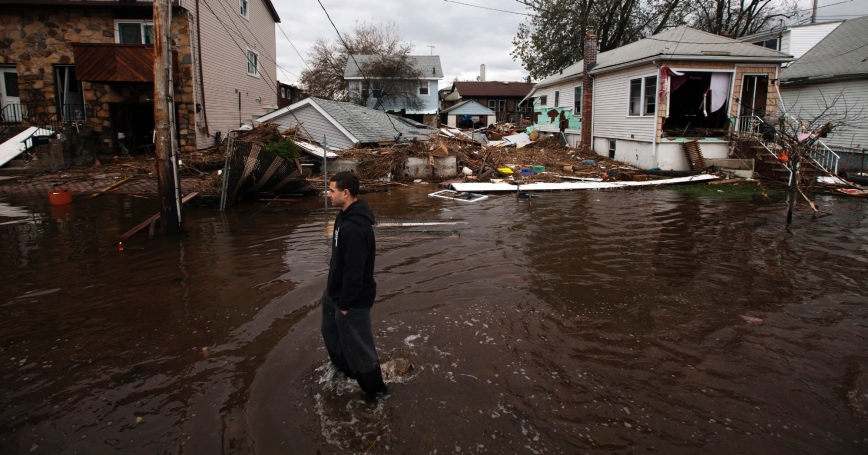 A man walks through floodwaters to survey damage from Hurricane Sandy in the New Dorp Beach neighborhood of Staten Island, New York, November 1, 2012

Elizabeth Yeampierre watched tree branches whip past her windows on the evening of October 29, 2012, as Superstorm Sandy slammed into New York City. She had spent years warning of the dangers one big storm could unleash in her community. Now, here it was.

Yeampierre is an icon in the working-class neighborhood of Sunset Park, Brooklyn, a champion of the people and the place. She knew as well as anyone that hundreds of industrial sites operated in the community, some just feet from homes. She didn't think they were ready for a storm like this.

Some 200 miles away, Ramya Chari watched the storm unfold on television from her home in Washington, D.C. As a policy researcher at RAND, she specializes in environmental risk and community health. She typed out a quick email to community groups in the storm's wake: “If there's anything we can do to help …”

As the skies cleared and the floodwaters receded, Sunset Park got to work. Small business owners and local volunteers scraped up debris and pumped out basements, often working with no more protection than some old shoes and grubby clothes. A concern went through the community: What, exactly, was in that debris and floodwater?

Sunset Park is the largest waterfront industrial area in New York City, a place where heavy industry coexists with apartment blocks and old brownstones. Even before the storm, community activists had organized “toxicity tours” to show outsiders what it was like to live near a waste-transfer station or a power plant. All it would take, they warned, was one big storm to flood those facilities and wash their pollutants into the community.

By the time Chari sent her email, community volunteers had already started going block by block through Sunset Park, mapping every industrial and chemical site. In time, they identified more than 2,200 locations storing more than 800 different chemicals. They were not at all convinced when limited testing after Sandy appeared to show no reason for concern. They wanted to better understand and model the risks themselves, to help the community protect itself. That was where Chari came in.

She joined what had become a broad coalition of local community groups and nonprofits investigating the environmental risk to Sunset Park. Together, they identified suspected carcinogens used in plastic and petroleum production as particular concerns to watch, along with lead and a key ingredient in antifreeze. But they also found that simple precautions—boots, gloves, and face masks—could cut the risk to cleanup workers by up to half the next time a major storm blows through.

The Power of Partnerships

“These are the kinds of partnerships that we need to invest in,” said Yeampierre, a self-described climate justice activist who leads an organization called UPROSE that has been fighting for Sunset Park since 1966. The group is one of the key members of GRASP, along with the New York City Environmental Justice Alliance, RAND, and an environmental risk-assessment nonprofit called The LifeLine Group.

“This is the way it has to be done—grassroots, from the ground up,” she said. “That's going to work better than institutions coming into communities with their own solutions. With climate change, the crisis is so big, our communities need the best thinking.”

Yeampierre had once seen children playing barefoot in antifreeze leaking from one of Sunset Park's dozens of auto-body repair shops. More than the power plant or the waterfront warehouses, those body shops are the real face of industry in Sunset Park. They're on almost every corner in some places, next to homes and daycares, sharing walls with restaurants.

It was easy to see them as part of the problem; Yeampierre saw them as part of the solution. When she confronted the owner of that leaking antifreeze, he didn't turn his back or make excuses. He broke down. He just didn't know the danger, or what to do about it.

The community members of GRASP starting going out month after month, catching shop owners in their front offices or repair bays, asking for just a few minutes of time. They started building trust, and getting in the door. Researchers taught them to conduct scientific surveys and interviews, to gather data on the chemicals they found on site.

Researchers taught community members to conduct scientific surveys and interviews, to gather data on the chemicals they found on site.

The information they brought back allowed researchers to begin modeling how chemicals might move through the community if they escaped in a storm. It also revealed a widespread need for basic safety education. The GRASP team started putting together safety protocols to help the body shops protect their chemicals and prevent them from escaping in the first place.

Around a dozen have signed on to implement the protocols. The community members are still working on the rest.

“This is really about helping communities be more proactive and more prepared,” said Jaime Madrigano, a policy researcher at RAND who helped lead some of the work in Sunset Park. “It's frustrating when a big disaster happens and you see communities struggling to get back from them.

“We know storms are becoming more frequent and more severe. We need to help individuals and communities mitigate the effects.”

By some estimates, nearly 23 million Americans live within one mile of a major chemical facility. Millions more live near small businesses that work with chemicals every day. They often lack the resources, or the political weight, to make their voices heard.

Sunset Park gives them a model. In a recent journal article, the team members of GRASP provided a step-by-step guide to help other communities evaluate and monitor the chemicals in their own backyards. Work with outside researchers, they advised; bring in experts and volunteers. But don't lose sight of the fact that it's the community at the center of the work, and it's the community that should set the agenda.

The need for such partnerships is urgent in this era of climate change, they wrote. It's only a matter of time before the next superstorm makes the question of what's stored in a warehouse, a nail salon, a dry cleaners, or a body shop a matter of public health and safety.

“It can sometimes seem like there's not much that people on the ground can do, that the problems are just too big,” Chari said. “But then you see a community like Sunset Park, working so hard to change its environmental exposure and risk, not accepting that the world has to be a certain way. The question isn't whether they're having an impact; it's what we can do to support them.”

In Flint, Mich., a worried mother starts sending samples of her tap water to a lab for testing—and helps expose a public-health crisis that may have poisoned thousands. On the gulf coast of Louisiana, boaters start tracking fish die-offs and oil sheens, and help document the environmental catastrophe that was the Deepwater Horizon oil spill.

They're part of what RAND researchers recently described as a growing movement shaping the future of science and public policy. More and more “citizen scientists” are collecting their own data, doing their own environmental monitoring—applying the tools of science to problems in their own neighborhoods.

The scientific community hasn't fully embraced the idea yet, the researchers found, which means citizen-led science hasn't reached its full potential. Citizen-science projects still face questions about the quality of their data, and a perception that some walk a fine line between research and advocacy.

But when the data are good and the methods are sound, the results can improve lives and save communities. The lead author of the study, Ramya Chari, knows from her work helping storm-struck Sunset Park, in Brooklyn, identify possible environmental contaminants.

The citizen-science movement is, in some ways, a return to scientific tradition, the researchers wrote. The theory of evolution and the field of genetics both owe their origins to amateur, citizen scientists.

Funding for these ventures was provided by gifts from RAND supporters and income from operations.