American News Habits and the Challenge of Truth Decay 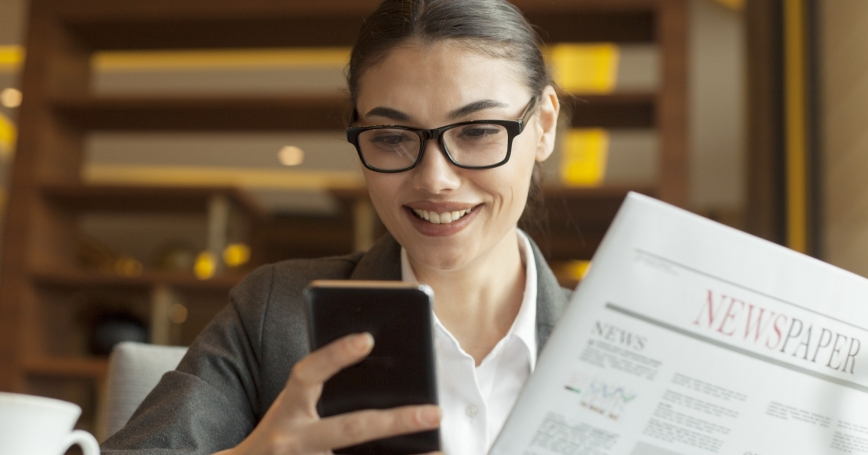 The numbers don't look good for American journalism right now. Public opinion polls place the media somewhere above Congress, but not much else, when it comes to trustworthiness. Asked to name one news source that they consider objective, 56 percent of the people in a recent survey came up empty.

Researchers at RAND have been looking for solutions to the diminishing role of facts and analysis in public life, a problem they call “Truth Decay.” It's the swirl of argument, opinion, bombast, and bias that too often passes for public debate in this country. And getting to the bottom of it requires getting to the bottom of our broken relationship with the media.

Their latest study flips the lens back on consumers of news. They asked 2,543 people where they get their news, how reliable they think it is, and whether they seek out viewpoints that are different from their own. The results provide some new clues to help diagnose, and treat, our current bout of Truth Decay.

There are two ways to look at this one. On the one hand, a significant part of the American public thinks the news media is slipping in its core duty to provide reliable information. On the other hand, 44 percent think it's as reliable—or unreliable—as it ever was, despite cataclysmic changes in the news industry. And 15 percent say it's actually gotten better.

Those respondents who say the news is more reliable now tend to be women, black or Hispanic people, and people with less than a college education. Those are some of the same demographics that have historically been under-represented within news organizations, and by them.

“It's possible these respondents think the news is more reliable now because they have more of a stake in it, they have more of a voice in it, they see themselves reflected in it,” said Jennifer Kavanagh, a senior political scientist at RAND who has led the research initiative. “It's important not to get so caught up in the negatives of the new media space that we forget about that really positive aspect.”

28% get their news from sources they acknowledge are unreliable

Most Americans seek out reliable sources for their news. But more than a quarter—potentially tens of millions of people—don't bother. They continue to get their news from sources they themselves rate as less-reliable, like friends or social media. They know there are better sources out there; they just don't use them.

Educating people to have better news-consumption habits is often proposed as one way to address Truth Decay, but clearly that's not sufficient.

Those same respondents tend to say the news overall has become less reliable. It's possible some of them have just given up on the news entirely, and no longer see any sources as particularly reliable.

“It does beg the question, Do they think there's any value to the news?” said Michael Pollard, a sociologist at RAND and coauthor of the study. “Educating people to have better news-consumption habits is often proposed as one way to address Truth Decay, but clearly that's not sufficient. These people know what they should do, but they may not have the time or ability to do it.”

People who voted for Hillary Clinton were more likely to say they “sometimes” or “infrequently” get their news from sources with viewpoints different from their own.

The results shed some new light on a phenomenon known as the echo-chamber effect.

With our choose-your-own-news media environment, conservatives can always find a conservative outlet to follow, and liberals can always find a liberal outlet. Yet the survey found that 74 percent of Americans always or sometimes get their news from an outlet they don't always agree with. Only 17 percent said they infrequently seek out other voices, and 9 percent said they never do. One caveat: It's possible some respondents may have reported that they seek out alternative viewpoints more than they really do.

More Americans get their news from broadcast television, but…

More and more people are turning to online news, even though fewer than a third of the respondents thought it was among the most reliable sources. In all, 24 percent said they rely on broadcast television as their primary source of news, followed by online sources (23 percent) and cable news (19 percent). The sources considered most reliable, meanwhile, were broadcast news, cable news, and print.

Not surprisingly, there were stark differences across the political divide. Trump voters were more than twice as likely to say cable news is more reliable than broadcast news. People who voted for Clinton or third-party candidates were more likely to trust print news.

The researchers were able to identify four distinct consumption profiles, based on news habits and demographics. Respondents who were younger, women, with lower education and lower incomes were more likely to rely on social media and news from their peers. Newspaper readers were significantly older. Those who relied on radio news tended to be working men with college degrees. And the online news crowd was younger, better educated, and higher-income.

Married people were nearly three times more likely to think the news they get from friends, family, and other peers is the most reliable. They were half as likely to seek out opposing viewpoints, less likely to use print or broadcast news, and much more likely to get their news from sources they know are less reliable.

It might be that news habits are as much a function of time and convenience as of age, education, or political leanings.

Those findings may point to a key challenge in fighting Truth Decay. Study after study has shown that married people—women, especially—don't have as much free time as their unmarried equals. It might be that news habits are as much a function of time and convenience as of age, education, or political leanings.

If that's the case, then just teaching people to be discerning consumers of news won't be enough to counter Truth Decay. Finding new ways to get good and reliable information to people racing out the door might be just as important.