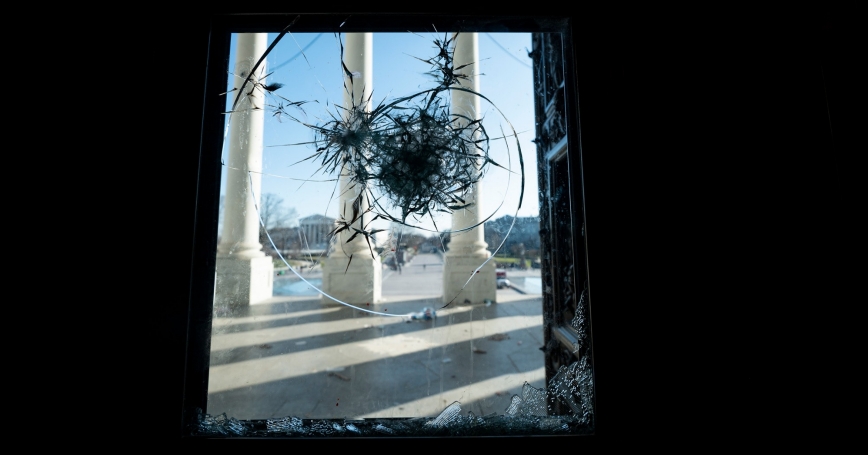 The east front of the U.S. Capitol seen through a shattered door on January 7, 2021, the day after the riot

On the afternoon of January 6, 2021, Todd Helmus, a senior behavioral scientist at RAND, was finishing a report on violent extremism when chanting crowds began streaming past his window. He grabbed his phone and chased after them.

He caught up with a man in an American flag shirt and a Trump 2020 ballcap just outside the U.S. Capitol. “All these trees you see out here, with these big, sturdy limbs,” the man said into the camera of Helmus' phone, “need to have bodies of senators, Republican and Democrats alike.… It's time for us to bring our guns and leave our women at the house.” Behind him, the crowd swelled against the Capitol steps.

Helmus is an expert in what pulls people into violent extremism. He has studied efforts to quell hate in Indonesia and to prevent violence in Nigeria. His new report, the one he was writing the day an insurrectionist mob crashed through the barricades of the U.S. Capitol, turns the lens on America. He and other researchers interviewed dozens of former extremists and their friends and family members to understand what drew them in, and how they got out.

“People can escape this; they can find their way out of these extreme ideologies,” he said. “Those who are knee-deep in QAnon conspiracy theories or so radicalized by the notion that the election was stolen—they, too, can escape that. There's hope at the end of the tunnel.”

Top law enforcement officials have described violent extremism—especially violent White extremism—as the greatest domestic threat facing the United States. The Biden administration has requested tens of millions of dollars to fight it. Yet the research on what an effective strategy might look like has too often failed to engage the people who might know best: those who have lived that life and left it behind.

RAND researchers partnered with two antiextremism support groups, Parents for Peace and Beyond Barriers, to change that. They interviewed 24 former extremists, as well as ten family members and two friends who had helped them escape extremism. Most of the former extremists had once sworn allegiance to groups like the Ku Klux Klan or the National Socialist Movement. But the researchers also interviewed former Islamic extremists who had left groups such as ISIS and al Qaeda.

Most of the people they interviewed had come to extremism by way of social media, books, and other propaganda; for one former White supremacist, it was “loud rock music and screaming voices.” Some had been recruited, but many others had radicalized on their own and then went looking for groups to join. One interviewee credited a book club run by the neo-Nazi Daily Stormer website. 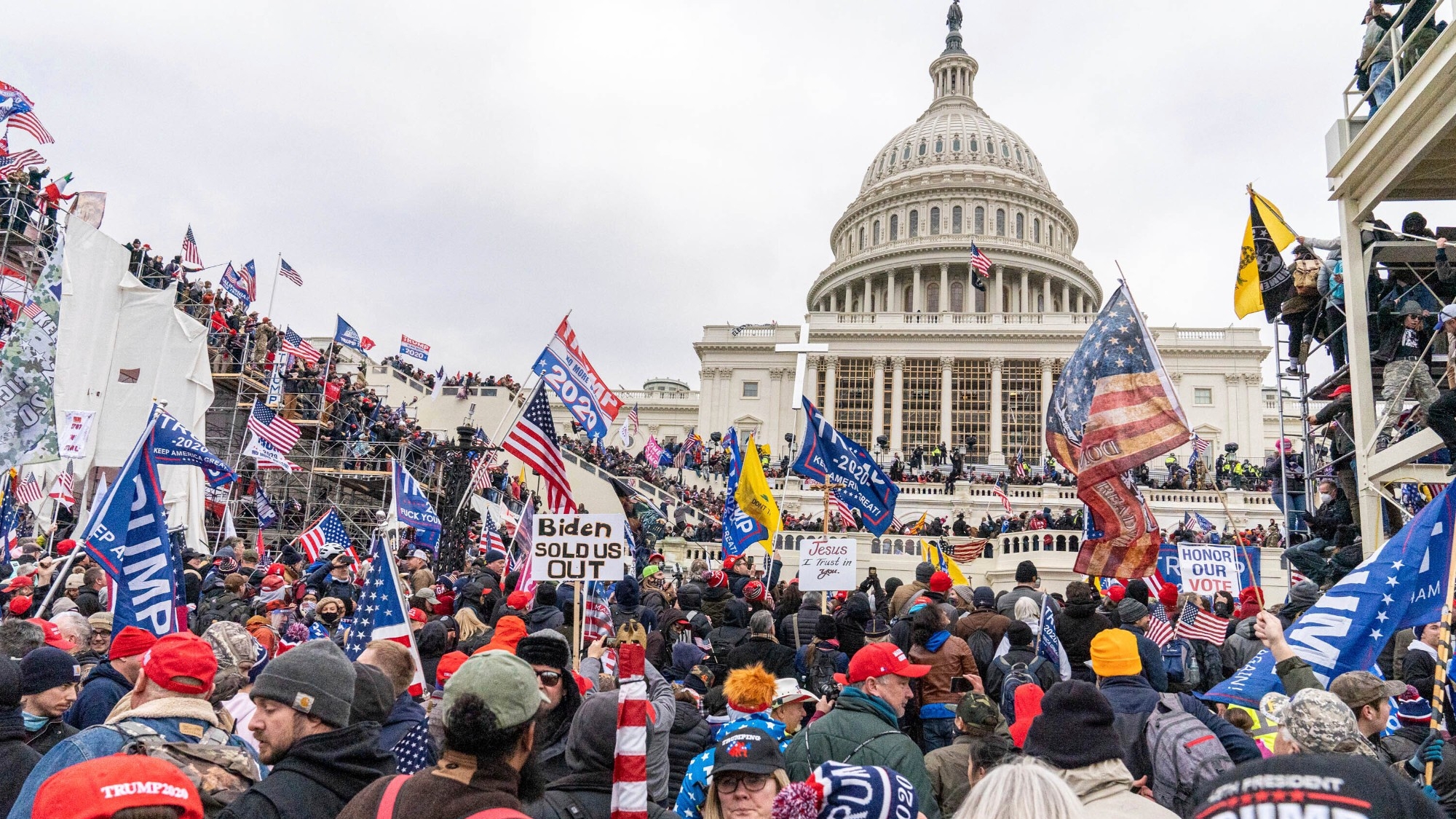 As a group, they tended to struggle with social isolation and financial instability; they told stories of being victimized, marginalized, or stigmatized by other groups or individuals. More than half showed signs of mental health problems, such as anger or anxiety, but the line from there to extremism was not direct. Instead, those problems had often cut them off from other opportunities, such as jobs or military service, fueling their sense of isolation or marginalization. Like gang members everywhere, they were drawn by the promise of camaraderie and power. One former White supremacist recalled how people would cross the street when they saw him coming.

“These group bonds pull people in, retain them, and make it hard to leave,” said Rajeev Ramchand, a senior behavioral scientist at RAND who coauthored the report. “It's really a process for these people. It makes sense, but that's really been missing from the discourse around violent extremism.” 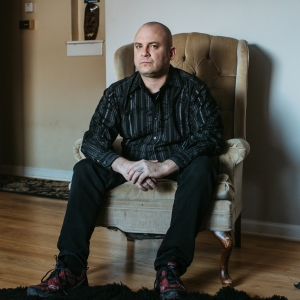 Jeff Schoep, former leader of the National Socialist Movement, at his home near Detroit in 2019

Jeff Schoep used to boast that he could recruit almost anyone into the National Socialist Movement, the largest neo-Nazi group in America. As its commander for 25 years, he proved his point hundreds of times. All he needed was a grievance, he said—a lost job, a tight bank account—and a sliver of suspicion that someone else was benefiting. “Now the foot is in the door,” he said.

“It worked very much like a cult,” said Schoep, who renounced the movement in 2019, recast himself as a spokesman against hate, and founded Beyond Barriers to redress some of the damage he had done. “Hate is developed,” he added. “It's fostered in these movements. You don't even realize it's happening to you. No one joins these movements saying, 'You know what? I'm going to be a bad guy.'”

Most of the interviewees had stories of family or friends—or, sometimes, the criminal justice system—trying to bend them away from the path they were on. Those confrontational interventions didn't just fail; often, they drove extremists deeper into the movement, feeding their sense of anger and victimization.

What did work? For more than half of the interviewees, it was an encounter with someone they had been taught to hate, who showed them kindness they did not deserve. “I was faced with things with my perceived enemy,” one former White supremacist said, “and my perceived enemy was treating me normal.” Another spent seven years thinking about a Black cashier who noticed his White power tattoo and told him, “You're a better person than that.” Seven years later, that one moment helped convince him to leave the movement.

Other former extremists said they just burned out, or grew disillusioned with the hypocrisy and pointless violence. For some, a turning point in their lives—an arrest, a friend's death—made them rethink what they were doing. For others, someone intervened at just the right moment, when they were already starting to question their involvement, and guided them the rest of the way. “The sheikh said to me… 'I'm going to give you a new pair of glasses by which to view the world,'” one former Islamic extremist said.

The interviews provide some direction as America turns to confront the extremist threat laid bare at the Capitol on January 6.

Families that sense a loved one sliding into extremism need more support and information about what warning signs to watch for, the researchers wrote. Public service announcements could help get the word out about what support groups are available, what hotlines to call. Antiextremism groups, and communities in general, need to provide more opportunities to bring people from different backgrounds together. That one intervention played a critical role in changing the views—and the lives—of many of the people in the study.

America's response to violent extremism should take a page from public health. It should look for patterns in who is susceptible, what risk factors they share, and what help they need.

“It was amazing how transformative just human contact and kindness could be,” said Ryan Andrew Brown, a senior behavioral and social scientist at RAND who co-led the project.

For Jeff Schoep, the former neo-Nazi leader, it was a conversation with a Black man that finally began to dent his commitment to hate and violence. The man described being hit with rocks when he was little and tried to march in a parade with his Boy Scouts troop. Something about his story broke through. “People who are trying to help can't go in saying, 'Hey, you racist bigot, you're wrong,'” Schoep says now. “That's the natural response, but it doesn't work.”

Instead, America's response to violent extremism should take a page from public health, researchers wrote. It should look for patterns in who is susceptible, what risk factors they share, and what help they need. It should focus money and resources on preventing extremism, long term, as if it were a virus or an addiction, rather than responding to it when it becomes a crisis.

RAND's Todd Helmus learned those lessons early in his career, long before he was chasing after extremists to ask about their motives. He got his start as a clinical psychologist, working to free people from substance use disorders, and sees some of the same forces at work in the extremists he's interviewed. “It's not something they do part-time,” he said. “It's their social circle, it's their friends, it's their lifestyle. It's all-consuming. It gives them meaning.”

“When people break the law, yes, they need to face consequences,” he added. “But at the same time, we need more efforts at outreach, support, mental health care, and other initiatives that can help these folks find their way out. Because without that, it's going to be very hard to escape that world.”