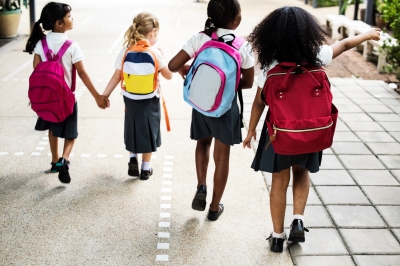 All public schools are required by law to provide an education to children and youth regardless of immigration status. Yet states, school district, and schools face significant obstacles in trying to serve undocumented and asylum-seeking immigrant students. These obstacles include a lack of clear data on how many are entering the country, as well as best practices for supporting the population when they enter states, districts, and eventually classrooms.

This webinar begins to address these obstacles in two ways:

Attendees to this free webinar will have the opportunity to ask questions and share their own experiences.

This webinar, hosted by RAND Education and Labor and RAND Gulf States Policy Institute, is part one of a two-part series. The second webinar will be hosted this summer, and will focus on district and school polices affecting this population. We will send invitations out soon if you wish to attend.

Shelly Culbertson is a senior policy researcher and associate director of the Disaster Research and Analysis Program at the Homeland Security Operational Analysis Center at the RAND Corporation. She focuses on forced displacement, disaster management, and education in emergencies. She coleads RAND’s Mass Migration Strategy Group. She has conducted studies on education of undocumented and asylum-seeking children in the United States, education of refugee children in the Middle East, education of children after hurricanes in the United States Virgin Islands, and graduation pathways for children in Louisiana. She has also led multiple other studies related to refugees, including about jobs, security, public services, and technology. Her commentaries have appeared in Foreign Policy, The National Interest, The Hill, Foreign Affairs, Newsweek, and other news outlets. She earned her M.P.A. in public policy and international development from Princeton University.

Julia Kaufman is a senior policy researcher at the RAND Corporation where she codirects the American Educator Panels. Her research focuses on how states and school systems can support high-quality instruction and student learning, as well as methods for measuring educator perceptions and instruction. She has led studies on how to support students' civics knowledge, skills, and dispositions; how state policies can encourage effective use of high-quality materials; implementation and student outcomes associated with the strategies of the Louisiana Department of Education; perceptions and implementation of state standards for kindergarten through twelfth-grade students; and implementation, outcomes, and costs associated with pipelines for preparing, hiring, and supporting high-quality school leaders and teachers. Kaufman has also led several projects to develop innovative measures of instructional practice, including measures of student-centered learning and teachers' mathematics instruction. Prior to coming to RAND, Kaufman's research focused on the main factors that support teachers' use of inquiry-based mathematics curricula and the extent to which survey measures can accurately capture teachers' instruction. She holds a Ph.D. in international education from New York University and an M.A. in teaching from the University of Pittsburgh.

Karina Castillo is the executive director of English Language Equity & Acquisition for Jefferson Parish Schools. Karina has served as a principal, assistant principal, and teacher for Jefferson Parish Schools and the Houston Independent School District. She is committed to serving the greater New Orleans community, prioritizing the needs of children and limited English proficient families. In addition to serving on the board for the Louisiana Language Access Coalition (LLAC), Karina also serves on the board for the Center for Resilience. Karina is a native New Orleanian who holds her Bachelor of Science in Elementary Grades Education from Louisiana State University, Baton Rouge, Louisiana. She earned her Master’s degree in Educational Leadership from Sam Houston State University, Huntsville, Texas.

Nicole Knight is the Executive Director of the English Language Learner and Multilingual Achievement Office at Oakland Unified School District. She is honored to have served Oakland students for the last 24 years as a teacher, teacher leader and instructional leader at the site and district levels. A National Board Certified Teacher in English as a New Language, Nicole has expertise in language and literacy development of multilingual learners, professional development for teachers and leaders, and equity-centered systems of continuous improvement. She is also the mother of two bicultural and bilingual children, both students in Oakland public schools.

Please contact Aaron Lang at alang@rand.org with any questions.