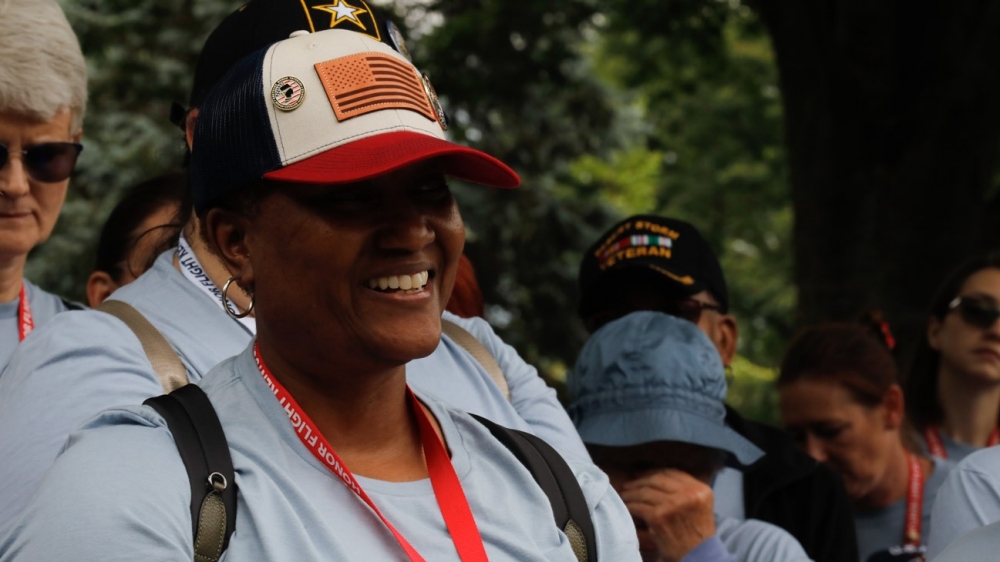 Join the RAND Epstein Family Veterans Policy Research Institute for the first in a series of webinars on pressing policy challenges affecting veterans, their families, and their communities.

The U.S. veteran population includes more than 2 million women, and their numbers are growing. Policies and programs designed to help veterans transition from military to civilian life might not be keeping pace with shifts in veteran demographics—and meeting the needs of veteran women will be a top priority. On November 17, RAND’s Dr. Kyleanne Hunter will share recent RAND research on what needs women have after they leave the military and opportunities and future research directions to better support them.

The presentation will be followed by a discussion with experts about the challenges women encounter when they leave military service, barriers to accessing sources of support, and promising policies and programs to support veteran women’s needs. RAND’s Kayla Williams will moderate the discussion, which will feature Cat Corchado, community relations and partnerships ambassador for the Women Veterans Network (WoVeN); U.S. Navy Command Master Chief (retired) Octavia D. Harris; Nancy H. Maher of the Office of Women’s Health at the U.S. Department of Veterans Affairs; and Ann Treadaway, director of Veteran and Military Programs and Services at Rutgers University.

Kyleanne Hunter is a senior political scientist at the RAND Corporation, where she studies military gender integration, suicide prevention, sexual assault and harassment prevention, and military personnel policies. She came to RAND from the United States Air Force Academy, where she was the director of the Strategy and Warfare Center and associate director of the Institute for Future Conflict. She has served on the Independent Review Commission on Military Sexual Assault and the Defense Advisory Committee on Women in the Services. She is a Marine Corps combat veteran with several deployments to Iraq and Afghanistan as an AH-1W Super Cobra attack pilot and worked in the Office of Legislative Affairs. Hunter has a Ph.D. in political and international relations from the University of Denver.

Cat Corchado is the community relations and partnerships ambassador for Women Veterans Network (WoVeN). She was one of WoVeN’s original peer leaders in 2017 and is an advocate and champion for women veterans, helping them navigate the military-to-civilian transition process. A U.S. Air Force veteran, she hosts the podcast Sisters-in-Service, which focuses on the experiences of service members and veterans, their families, and those who support them. Corchado is also a fitness professional; with more than 37 years of experience and certification from the Cancer Exercise Training Institute, she focuses on helping women with their health and fitness needs.

Command Master Chief (ret.) Octavia D. Harris served in the U.S. Navy for 30 years, leading commands at sea, ashore, and overseas. When she was assigned to the USS Nimitz (CVN 68) in 1994, she became one of the first women to serve on a combatant warship. After retiring, she was a program manager for the Comprehensive Advanced Restorative Effort (CARE) program at Naval Medical Center San Diego, a collaboration with VA and civilian medical centers of excellence that provides multidisciplinary care for the traumatically wounded, ill, and injured service members and veterans. Harris is a member of the Defense Advisory Committee for Women in the Services (DACOWITS) and prior chair of the Veterans Affairs Advisory Committee for Women Veterans (ACWV). She has an M.S. in health care operations management from the University of Arkansas.

Nancy H. Maher joined the VA Office of Women’s Health in 2015, where she is responsible for internal and external collaborations, as well as developing, leading, and implementing projects and programs to improve primary and specialty care access and quality for women veterans. She previously worked in the Veterans Health Administration’s Office of Rural Health, implementing and evaluating pilot programs and directing communications and strategic planning for a national program to support rural veterans. Maher has a Ph.D. in public health from the University of Alabama at Birmingham.

Ann Treadaway is the director of Veteran and Military Programs and Services at Rutgers University, where she serves as the principal advocate for military-affiliated students and the university’s liaison with outside agencies and offices whose work affects this population. She was previously the director of Veterans Support Services at the College of Staten Island, City University of New York. While assigned to the U.S. Army’s 94th Engineer Combat Battalion (Heavy), she deployed twice in support of Operation Iraqi Freedom. Treadaway has a doctorate in education from Northeastern University, where her research focused on military cultural competency and bridging the military-civilian knowledge gap. She has conducted more than 100 Military Cultural Competency Education sessions, presented nationally on topics related to military service and culture.

Kayla M. Williams is a senior policy researcher at the RAND Corporation. Her focus areas include optimizing policies and programs to support veterans and military personnel. She was most recently Assistant Secretary of Public and Intergovernmental Affairs at the U.S. Department of Veterans Affairs, where she directed a team of nearly 80 employees who communicated VA policies and initiatives through diverse channels. She has served on the Department of Labor Advisory Committee on Veterans’ Employment, Training, and Employer Outreach and the VA Advisory Committee on Women Veterans, among others. Williams was an Arabic linguist in the U.S. Army and is the author of two memoirs about her experiences during and after deploying to Iraq. She has an M.A. in international affairs from American University.