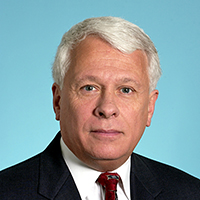 Michael A. Wermuth, a RAND Corporation researcher and terrorism expert who was the executive director of a federal advisory panel on terrorism when it concluded — nearly two years before 9/11 — that a terrorist attack on U.S. soil was inevitable, has died. He was 69.

Wermuth, who was also a lawyer and a former deputy assistant secretary of defense for drug enforcement policy, died Nov. 1 in Charleston, South Carolina, after a sudden illness.

After joining RAND as a policy analyst in 1999, Wermuth later served as director of its Homeland Security Program and co-director of its Center for Terrorism Risk Management Policy. He managed RAND's Counterterrorism and Homeland Defense programs from 2008 until 2010. He continued to work for RAND part-time.

“This is extremely sad and unexpected news,” said Michael D. Rich, president and chief executive officer of RAND. “Beyond the clear foresight Mike showed in his leadership of the Gilmore Commission staff, he became an important figure in helping to establish the nation's initial homeland security strategies and programs.”

The Gilmore Commission was formally known as the Advisory Panel to Assess Domestic Response Capabilities for Terrorism Involving Weapons of Mass Destruction. It was chaired by James Gilmore, then governor of Virginia. Wermuth headed the project for the nonprofit RAND, which provided the analytical staff and support for the commission.

In the first of five reports delivered between 1999 and 2003, the Gilmore Commission warned that the “threat of a terrorist attack on some level” inside U.S. borders was “inevitable” and the United States “must prepare,” Gilmore said at a news conference days after the Sept. 11, 2001, attacks, according to a transcript published by the Washington Post.

The commission eventually called for a cabinet-level counterterrorism agency, and the Department of Homeland Security was established in 2002.

“When you're talking about risk management, the starting point has to be some kind of threat assessment,” Wermuth said in a 2005 Journal of Commerce article about strategic thinking by Homeland Security. “What is the composite set of threats out there against us? You should be constantly reviewing that so you understand where you should be putting your priorities. You can't defend against everything.”

Michael Anthony Wermuth was born in 1946 in Birmingham, Alabama. He attended the University of Alabama, where he earned a bachelor's degree in commerce and business administration in 1969 and a law degree in 1974. He graduated from the U.S. Army Command and General Staff College in 1986 and the U.S. Army War College in 1991.

His career in the Army stretched from 1969 to 1999 and included active-duty and reserve service. He retired from the Army at the rank of colonel. His military awards and decorations include the Legion of Merit, the Meritorious Service Medal, the Army Commendation Medal and the Army Achievement Medal. He also is a recipient of the Secretary of Defense Award for Outstanding Public Service.

After working as an attorney in Mobile, Alabama, from 1974 to 1980, Wermuth served as the chief counsel and legislative director for Sen. Jeremiah Denton, R-Ala., in Washington, D.C., from 1980 to 1987. He then moved to the Department of Justice, where he spent a year as legislative counsel for civil rights and was deputy assistant attorney general for legislative affairs until 1989.

In 1989, Wermuth was named deputy assistant secretary of defense for drug enforcement policy, with a focus on helping agencies coordinate the implementation of the president's national drug control strategy. He held the position until early 1993.

He worked in RAND's Washington, D.C. office on projects that were often related to terrorism. They included the 2010 report “Before Disaster Strikes,” which detailed how defense officials can better support the nation's response to a major disaster on U.S. soil.

“Mike was the quintessential gentlemanly Southern lawyer,” said Gary Cecchine, director, RAND Gulf States Policy Institute. “Mike was just one of those people who was willing to give counsel and offer advice. He was kind and thoughtful — and he could quote you chapter and verse regarding what the law says.”

Although Wermuth officially retired from RAND in 2010, he continued to work for the institution as a consultant and also taught at Texas A&M University's Bush School of Government and Public Service. He also had been a professor in the Department of Public and International Affairs at George Mason University. He taught graduate level online courses in homeland security and homeland defense.

Wermuth is survived by his wife of 35 years, Fran; two children, Ken Bryan and Heather Livingston; and five grandchildren.

A gathering of family and friends will celebrate his life Nov. 6 on Kiawah Island. Wermuth will be buried in Arlington National Cemetery.