Although much has been written about the differences between “establishment” and “outsider” candidates in the U.S. presidential election, voters don't see each party's candidates as very ideologically different, according to the new RAND Presidential Election Panel Survey (PEPS).

Instead, Democratic voters see Bernie Sanders as only slightly to Hillary Clinton's left and Republican voters see most of the GOP candidates clustered in the center right. All the candidates, with the exceptions of Sanders and Ted Cruz, are perceived as being closer to “moderate” than “very liberal” or “very conservative,” according to the online survey of 3,037 adults conducted between Dec. 13 and Jan. 6 by the nonprofit, nonpartisan RAND Corporation.

RAND, in collaboration with political scientists John Sides of George Washington University, Lynn Vavreck of UCLA and Michael Tesler of UC Irvine, surveyed members of the RAND American Life Panel (ALP), made up of several thousand adults recruited using traditional probability methods such as address-based sampling and random-digit dialing. Although respondents complete surveys on the web, respondents need not have internet access when they are initially recruited, reducing a source of bias and making the sample more representative.

The survey, the first in a series that RAND will undertake between now and Election Day in November, confirmed Donald Trump (the favorite of 38% of likely Republican voters) and Hillary Clinton (57% of likely Democratic voters) as front-runners in their respective primary races. Over the course of the campaign, RAND's surveys will shed light not only on voting intentions but also on voters' opinions about political issues in the news, attitudes towards candidates, and many other topics.

“What sets this effort apart is that we will survey the same people repeatedly over the course of the project, rather than a new group of people each time,” said Michael Pollard, a sociologist at RAND who is running the survey. “When surveys sample a different group of people every time, it is difficult to distinguish whether people are truly changing their opinions over time or if the sample just happened to randomly include more people with a certain opinion. There are always tradeoffs in polling, but the PEPS approach of putting the same questions to the same people over time has important advantages.”

The PEPS also includes the novel probabilistic approach to assessing vote intentions that was used by the RAND ALP during the 2012 presidential election. This approach is designed to more accurately capture the likely votes of a greater number of voters not closely aligned with either candidate. It was used with considerable success in the 2012 presidential election.

In this inaugural survey PEPS respondents report a 47% chance of supporting the Democratic candidate in November 2016 and a 43% chance of voting for the Republican, and a 10% chance of voting for some other candidate. At this early date general election polls cannot reliably predict the actual outcome. However, this provides a baseline we can use to track opinions in the months ahead — and track people's movements into and out of these camps.

With regard to the primary election, likely primary voters were asked to rate candidates from very liberal to very conservative. Most of the candidates were deemed closer to the middle than the extremes of the ideological spectrum, except Cruz and Sanders. 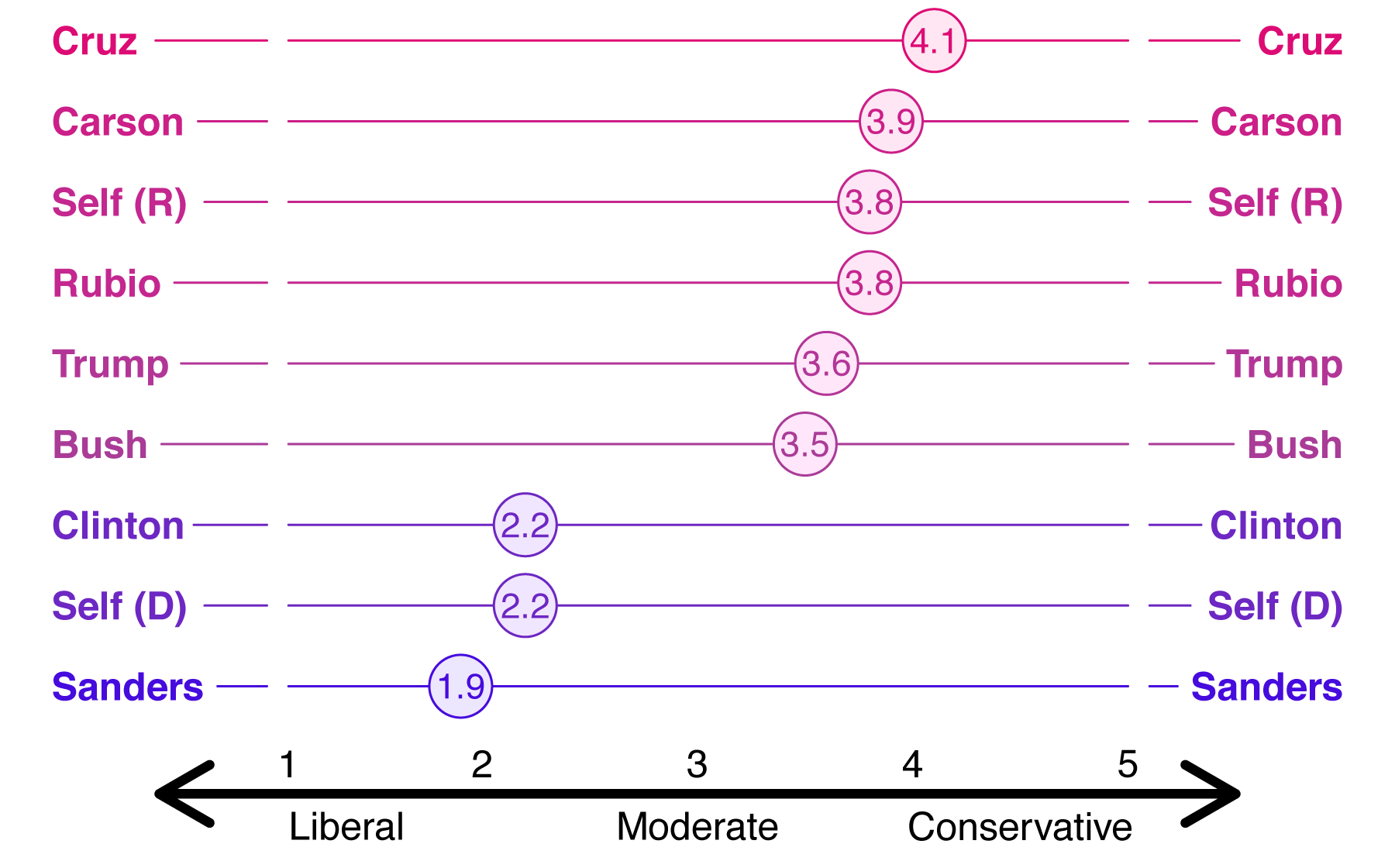 “This finding looks very similar to what we saw among Republican voters in 2012,” said John Sides, co-author with Vavreck of The Gamble: Choice and Chance in the 2012 Election. “Despite apparent ideological differences in the Republican fields in 2012 and this year, Republican voters do not see the candidates as all that ideologically distinct. ‘Outsiders' and ‘establishment' figures aren't distinguished that sharply.”

The PEPS also contains items commonly used in social scientific research to measure perceived threat from immigrants and resentment toward demands for equality by African-Americans and women. All of these measures are strong predictors of support for Trump in the primaries. In fact, Trump performs particularly well against his closest contender, Ted Cruz, among likely Republican primary voters who both strongly believe that immigrants are a threat to American culture and that “women who complain about harassment cause more problems than they solve.” 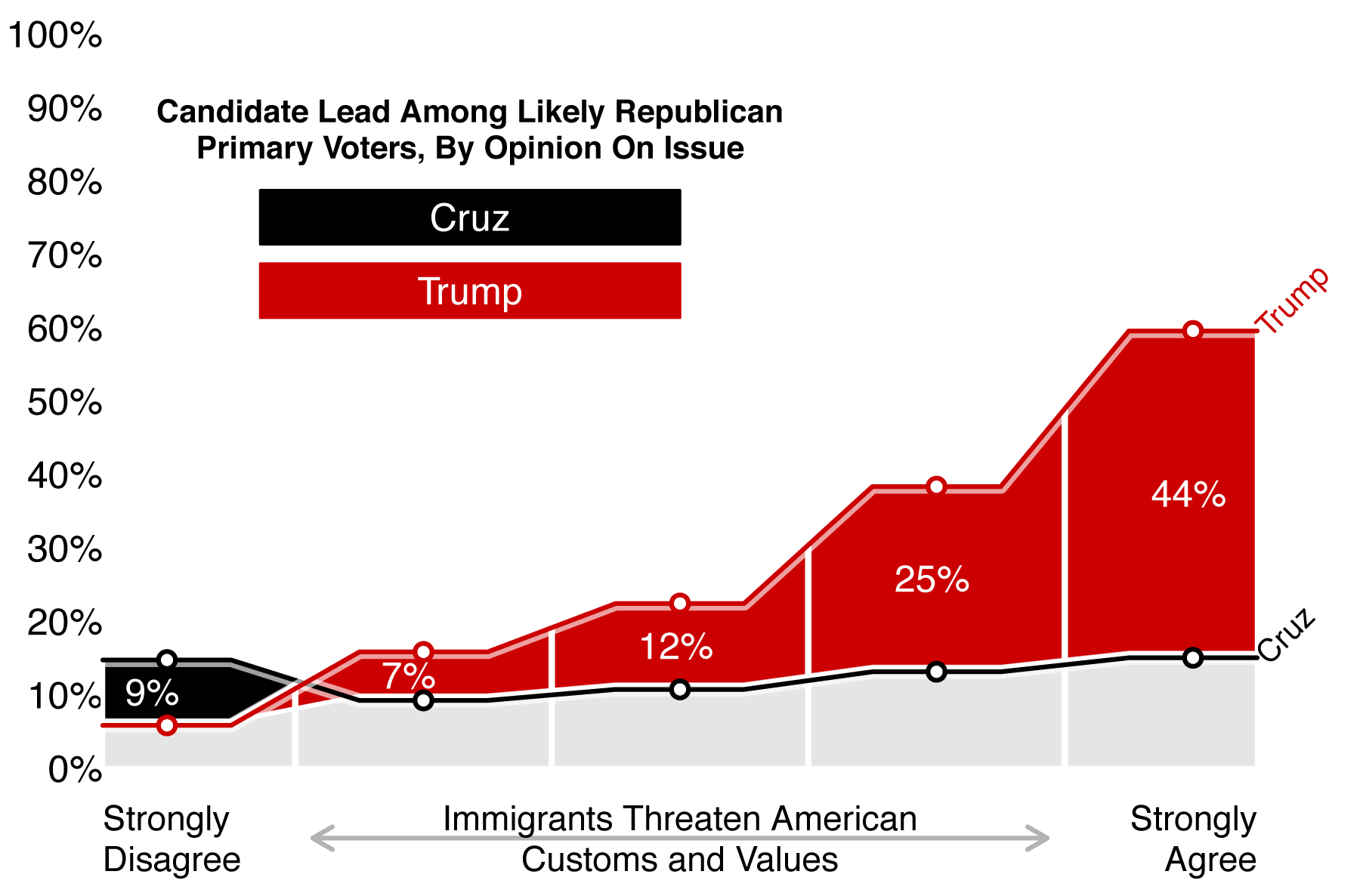 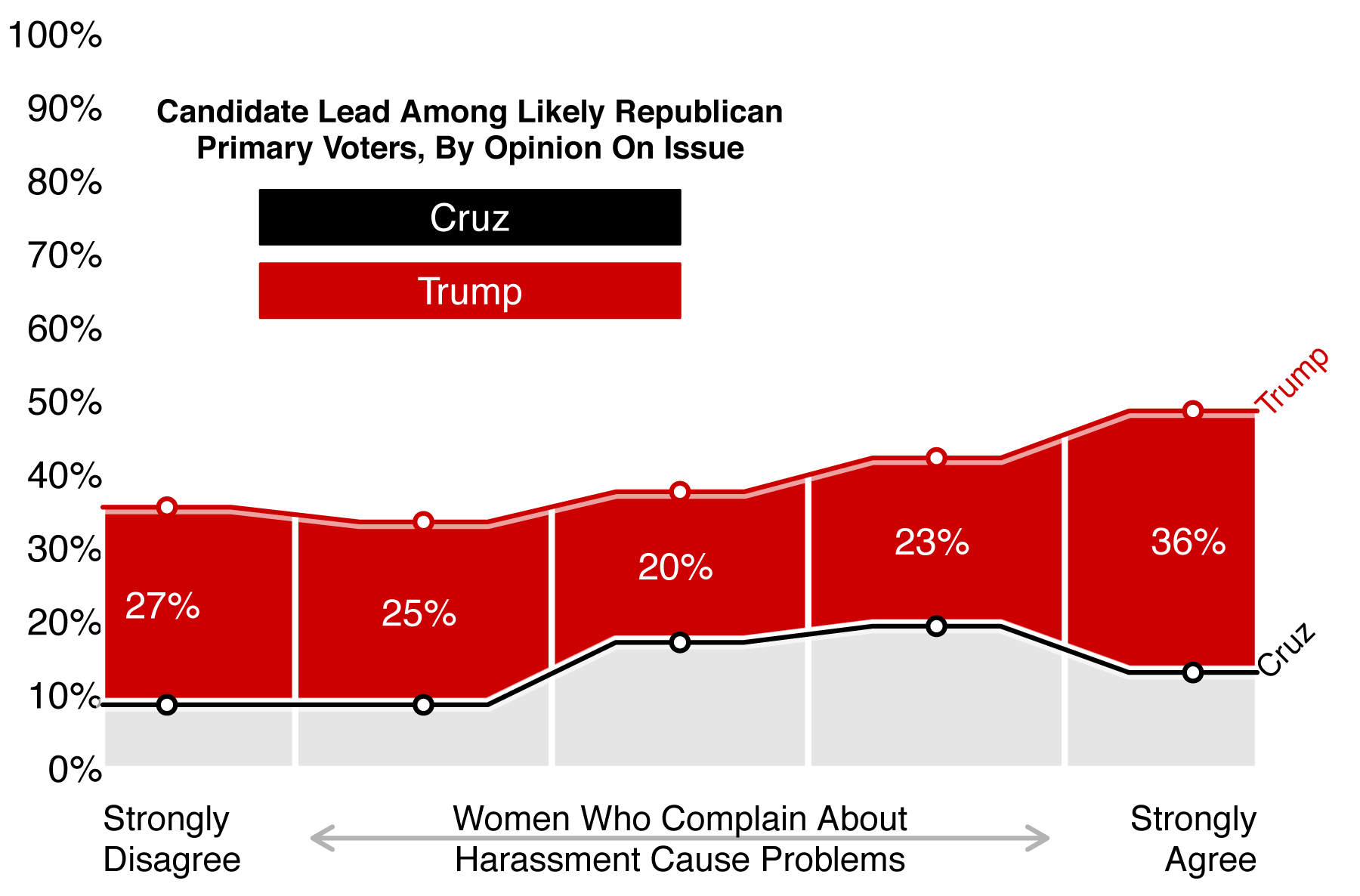 Figures 2–5 present the mean level of support for Cruz and Trump within outcomes groups, taking into account the whole field of candidates. Each outcome group includes respondents who marked a specific answer to a survey item. For example, all likely Republican primary voters who reported “Strongly Agree” to the survey item “Immigrants Threaten American Customs and Values” would constitute an outcome group. The shaded area between the lines reports how much of a lead one candidate has over the other, with black shading indicating that Cruz leads and red shading indicating that Trump leads. On some of the plots, no area is shaded black, indicating that Cruz does not have a higher percentage of supporters for any of the issue stance groups.

Trump also beats Cruz among likely primary voters who have liberal positions on economic issues. Trump does better among those who support tax increases for the wealthy and support labor unions, while Cruz does worse. The same pattern emerges with other economic issues, such as raising the minimum wage and a single-payer health care system. 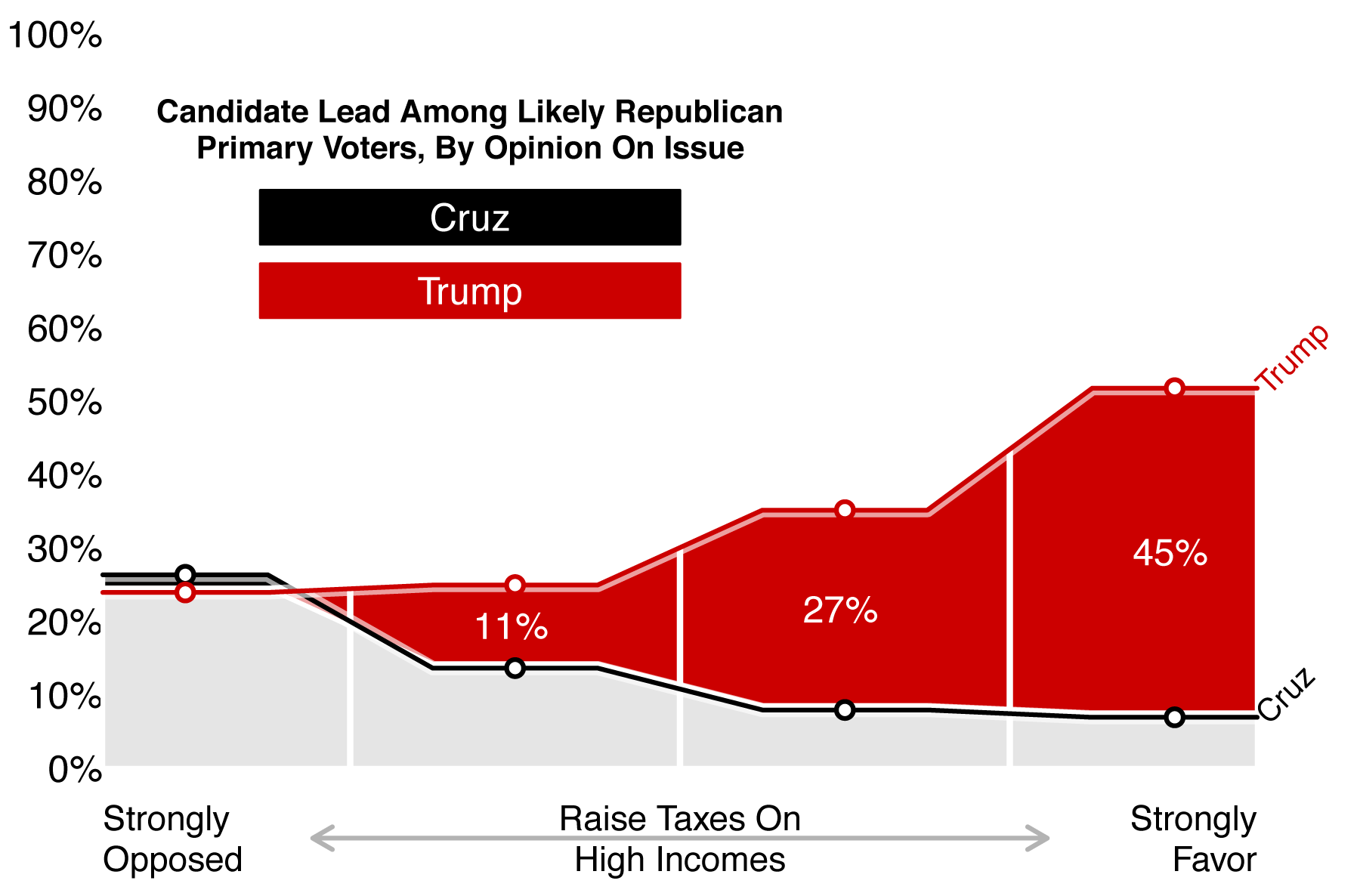 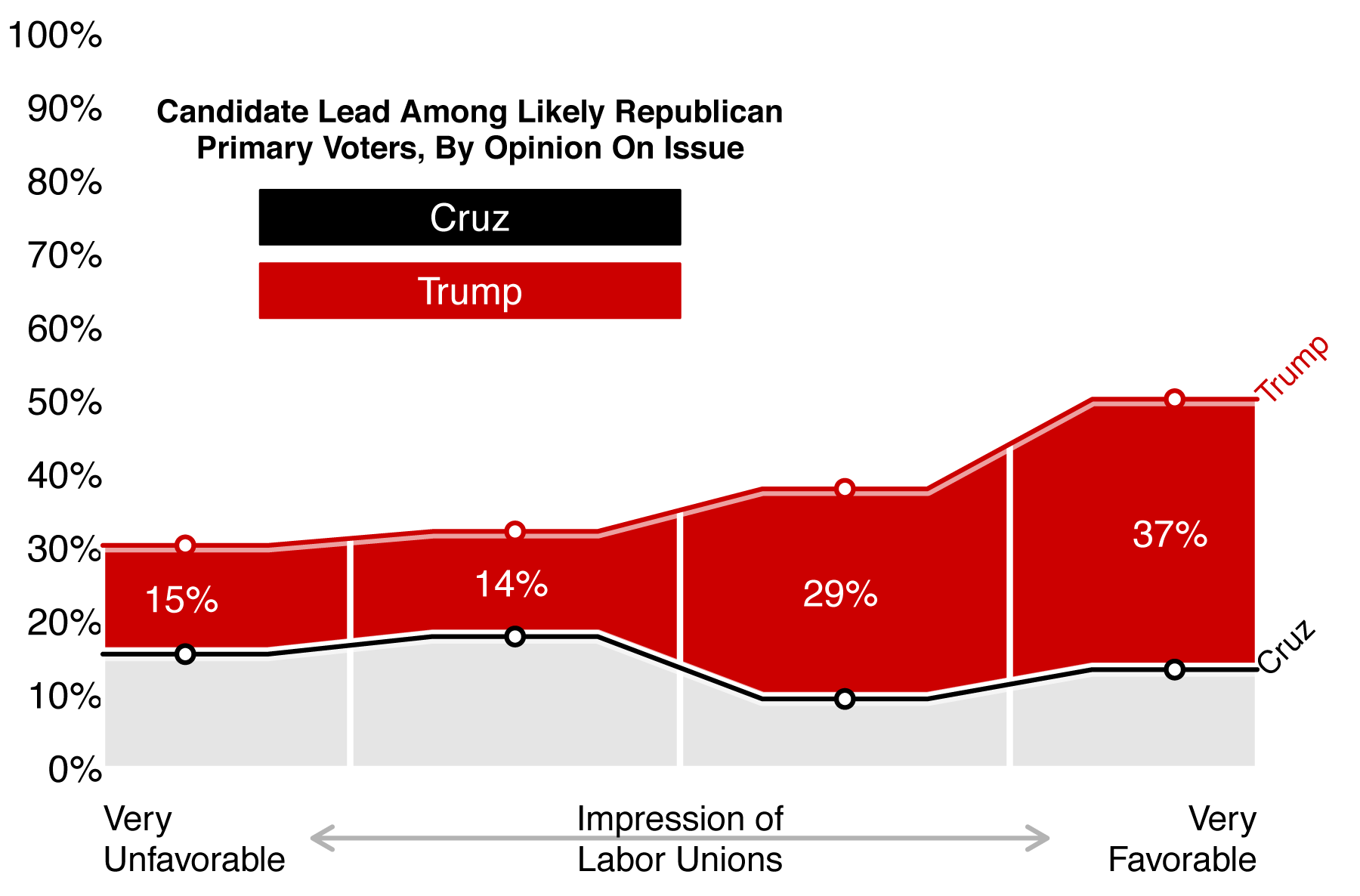 Among likely Republican Primary voters there is a substantial porportion with relatively liberal positions; 51% of Republican Primary voters strongly or somewhat favor increasing taxes on individuals who make more than $200,000 a year, and 38% have a favorable or very favorable opinion of labor unions, for instance. It appears, then, that Trump supporters form a powerful populist coalition uniting concerns about immigrants and other groups with support for economically progressive policies.

For the Democratic candidates, the PEPS survey reveals an important challenge facing Bernie Sanders—even as he appears to be gaining ground in Iowa and New Hampshire. Respondents likely to vote in a Democratic primary or caucus have favorable views of both Clinton and Sanders, but significant uncertainty about Sanders remains.

In particular, just nearly 30% of likely Democratic primary voters did not express an opinion about Sanders when ask how favorably they viewed him, whether he is a strong leader, or whether he “cares about people like you.” For those who did have an opinion, Sanders has a slight edge over Clinton on the “empathy” dimension but faces a significant deficit on the leadership dimension. 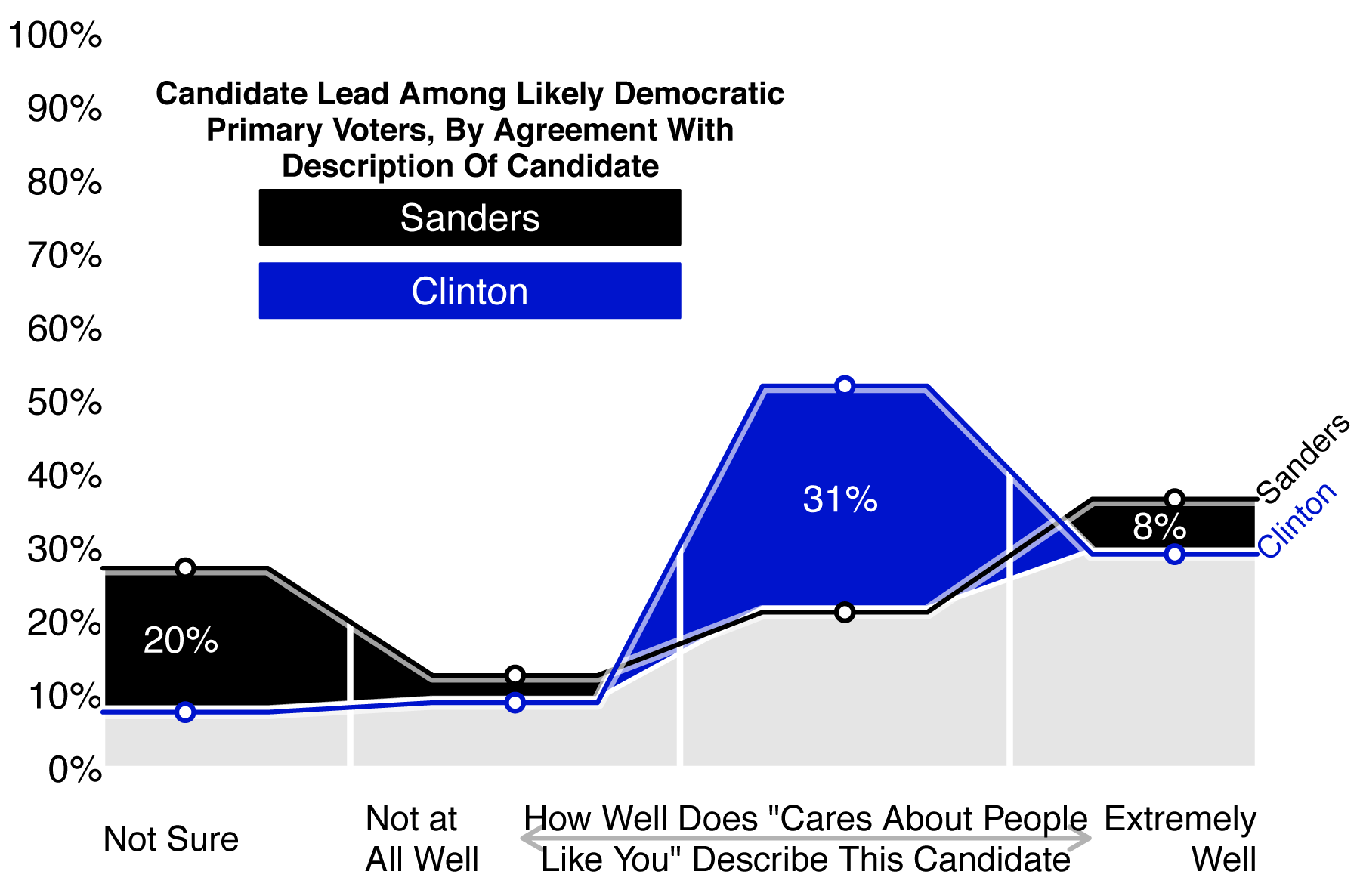 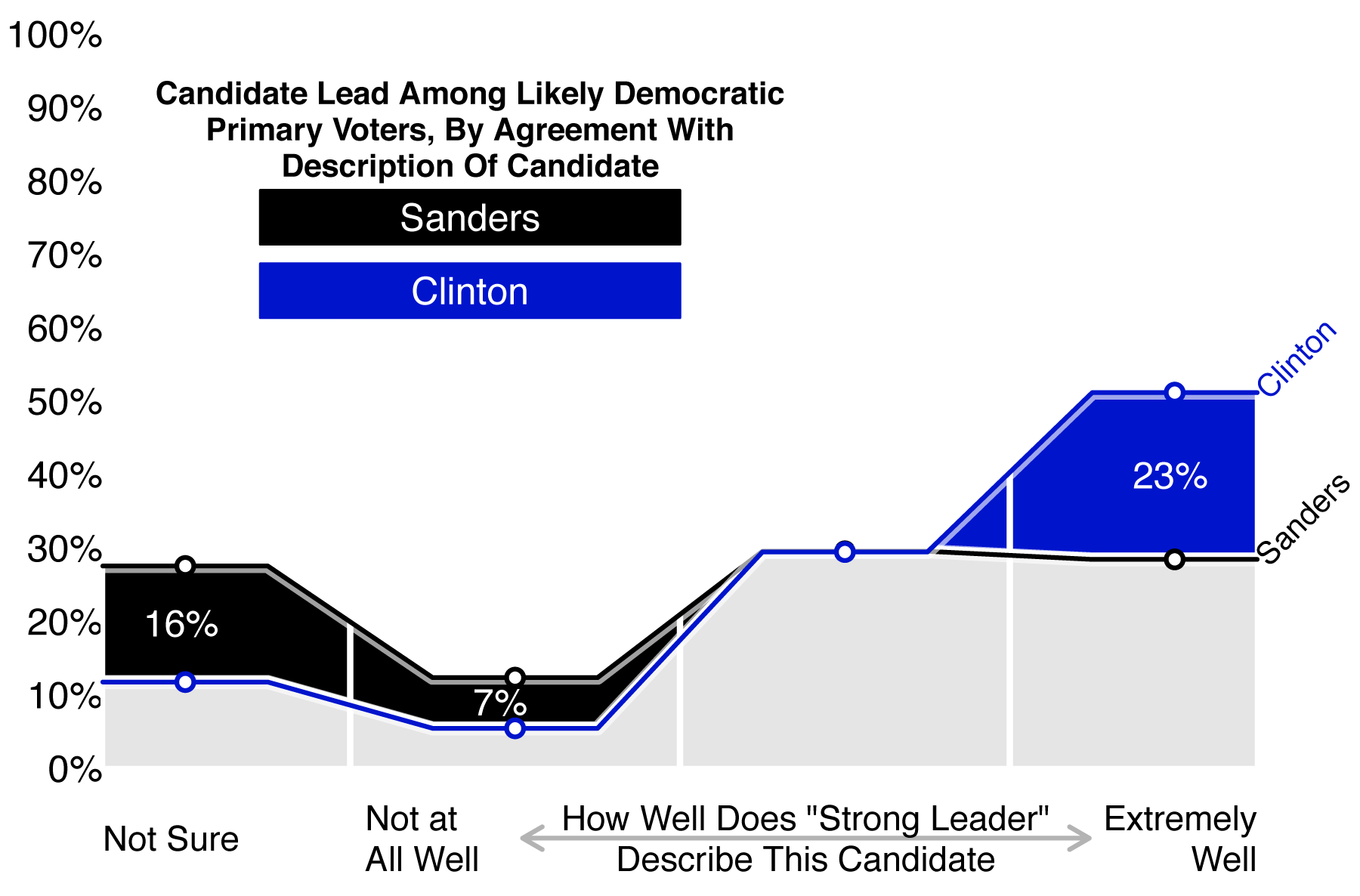 Figures 6–7 present the mean level of support for Sanders and Clinton within outcomes groups, taking into account the whole field of candidates. Each outcome group includes respondents who marked a specific answer to a survey item. For example, all likely Democratic primary voters who reported “Strongly Agree” to the survey item “Clinton Cares About People Like You” would constitute an outcome group. The shaded area between the lines reports how much of a lead one candidate has over the other, with black shading indicating that Sanders leads and blue shading indicating that Clinton leads.

Future PEPS surveys will be fielded to the same people at crucial points throughout the election cycle, including after Super Tuesday, the national conventions, before and after the presidential debates, and after the election.

Ultimately, the PEPS project will provide a window into the electorate that extends deeper than what traditional polls can provide. “We will be asking different kinds of questions and also tracking movements across the candidates (and into and out of undecided) within this large sample of American voters as the campaign unfolds,” Pollard said.