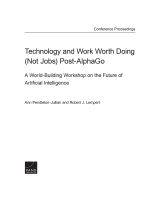 Technology and Work Worth Doing (Not Jobs) Post-AlphaGo

A World-Building Workshop on the Future of Artificial Intelligence

There has been extensive discussion of artificial intelligence's (AI's) impacts, good and bad, but much less on how AI might be used to shape a new world in which we would like to live. In June 2018, in Santa Monica, California, the Pardee RAND Graduate School and the RAND Frederick S. Pardee Center for Longer Range Global Policy and the Future Human Condition convened a workshop called "The Future of Technology and Work (Not Jobs) Post-AlphaGo." This workshop gathered a small group of innovative thinkers to engage in an approach called large-scale speculative design and its companion methodology, world-building, to sketch desirable, AI-enabled future worlds. Large-scale speculative design aims to avoid the inertia of the present by helping us to imagine possible outcomes that may be different from what is already set in motion. World-building is characterized by imagining a few alternative and desirable future "what if" propositions and then building them out in detail across many relevant domains to understand their implications, uncover unintended interactions, and experiment with causal chains. This workshop was intended both to prototype a new methodology for speculating on an aspect of the future human condition and to initiate a line of inquiry around the topic from this different approach. This report summarizes the framing of the topic, the process that was employed, the three scenarios and initial world-building exercises, and the ensuing conversation among the workshop participants. It finishes by outlining suggested next steps.