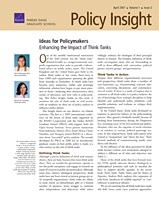 Ideas for Policymakers: Enhancing the Impact of Think Tanks

As think tanks have become more numerous, visible, and seemingly influential, scholars have begun to pay more attention to them — analyzing their characteristics, their modes of operation, and their roles in policymaking. This Policy Insight builds on this work and examines the role of think tanks in civil society, with an emphasis on their use of policy analysis to influence policy debate. The authors draw on two distinct, yet related, activities. The first is a 2005 international conference on the future of think tanks organized by the RAND Corporation and the Pardee RAND Graduate School (PRGS) with support from the Open Society Institute. Seven partner institutions from Indonesia, Mexico, Peru, South Africa, China, Namibia, and Hungary joined RAND in a discussion about “successful” policy analysis. The second, developed by PRGS in 2006 for its introductory graduate course on how public policy is made, is a class session on the role of think tanks.