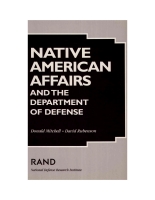 Native American Affairs and the Department of Defense

On April 29, 1994, President and Mrs. Clinton, Vice President and Mrs. Gore, and every member of the President's cabinet (other than the Secretary of State) met with more than 300 Native American[1] leaders of "federally recognized Indian tribes" on the south lawn of the White House. It was the first time in the nation's history that a President of the United States had held such a meeting.

During the meeting, the President signed a memorandum directing the heads of all executive branch departments and agencies to

Implications of the President's Memorandum for DoD

The directives contained in the President's April 29, 1994 memorandum are to be carried out within DoD's natural and cultural resources program and are only some of many binding requirements. The way in which the above directives are implemented in the field may vary with such factors as the competing demands imposed by other natural and cultural resource obligations, the individual personalities of DoD installation commanders, the continual rotation of assignments, the DoD land managers' understanding of the reasons the President issued his April 29, 1994 memorandum, and the extent to which it is recognized that vigorous implementation of the memorandum will materially advance DoD's achievement of its natural and cultural resources protection obligations.

It is thus critical for DoD personnel—at many levels of organization—to gain a better understanding of the implications of the President's memorandum for the Department. To give installation commanders and land managers a better understanding of the historical and political circumstances that motivated the President to issue his memorandum, we attempt to answer the following questions:

Our central observation is that the President's April 29, 1994 meeting with the leaders of the nation's federally recognized Indian tribes symbolizes the growing ability of Native American leaders to influence the development and implementation of federal policies that affect their indigenous constituencies.

We have included two case studies—one from Idaho and another from Alaska—to illustrate the challenges that implementation of federal Native American–related policies can present for DoD installation commanders and land managers in the field. The studies show that morally compelling concerns of Native Americans can be combined with the organizational capability of environmental activists and others to create a political synergy of considerable consequence to the attainment of DoD land management objectives.

Through its ratification of treaties and enactment of statutes, Congress has imposed numerous Native American–related obligations on DoD agencies. Many of those obligations are similar in their legal structure to those implied by certain natural resource protection laws. They emphasize planning and self-enforcement, and have indirect—though potentially binding—mechanisms of enforcement.

This report reviews the major statutes that require DoD installation commanders and land managers to address Native American concerns, and demonstrates how implementation of the directives contained in the President's April 29, 1994 memorandum can materially advance DoD agency implementation of Native American-related treaty and statutory obligations.

The first component is the unusually large number of Native Americans (as a percentage of the Native American population) who have served in the armed services, which we believe establishes a compelling justification for DoD installation commanders and land managers to vigorously implement the President's memorandum.

The second component is the United States Army's participation in implementing Congress' Indian policies during the 18th and 19th centuries. We discuss the common elements of that history, recognizing that each federally recognized Indian tribe and each Native American group that has not been federally recognized has its own history of involvement with the federal government during the 18th and 19th centuries. DoD installation commanders and land managers who interact with representatives of a particular tribe or Native American group should be aware of the role history may play in the current perspectives of that particular tribe.

One of the greatest challenges DoD officials will face in implementing the President's directive is to arrive at an approach for interacting with Native American groups that are not federally recognized tribes.

The second major challenge is to develop a policy for dealing with and consulting Native American groups that are not federally recognized Indian tribes but with which statutes such as the Native American Graves Protection and Repatriation Act and the Alaska Native Claims Settlement Act require DoD agencies to interact. The development and implementation of such a policy are particularly important with respect to DoD agency relations with Alaska Natives and Native Hawaiians, whose history of involvement with the United States government is different from that of Native Americans who reside in the coterminous states.

We conclude this discussion with a case study from Camp Pendleton, California, that illustrates the importance of having a policy for interacting with Native American groups that are not federally recognized Indian tribes.

Our general argument is that the importance of Native American affairs to the Department of Defense is growing. Just as environmental affairs became a major DoD concern in the late 1980s, a number of factors signal the need to pay increased attention to Native American affairs in the next decade. The DoD should interpret the President's meeting on the White House lawn as symbolic of this.

We argue that the questions posed above should be answered in the following way.

To respond to these general observations, we recommend that the following actions be taken to implement the President's April 29, 1994 memorandum and to improve DoD's working relationship with Native Americans:

In summary, DoD should expect that Native American affairs will be of growing importance to the department, changing from the need to meet a few loosely enforced statutes to a larger awareness involving core DoD interests and goals. DoD will need to develop new capabilities and an increased level of organizational attention.

The project was conducted within the Acquisition and Technology Policy Center of RAND's National Defense Research Institute, a federally funded research and development center sponsored by the Office of the Secretary of Defense, the defense agencies, and the Joint Staff.

This report is part of the RAND Corporation Monograph report series. The monograph/report was a product of the RAND Corporation from 1993 to 2003. RAND monograph/reports presented major research findings that addressed the challenges facing the public and private sectors. They included executive summaries, technical documentation, and synthesis pieces.