The Impact of Air Quality on Hospital Spending

Air pollution is harmful to human health, but little is known about the costs of pollution-related health care. If such care imposes a significant burden on insurance companies and employers, they would have substantial stakes in improving air quality. Reduced medical spending could also benefit public programs such as Medicare and Medicaid. This study estimated the amount of medical spending by private health insurers and public purchasers, such as Medicare, that is related to air pollution. Specifically, the authors determined how much failing to meet air quality standards cost various purchasers of hospital care in California over 2005–2007. The results indicate that substantial reductions in hospital spending can be achieved through reductions in air pollution.

Air pollution is detrimental to human health, with adverse effects that range from restrictions in physical activity, to emergency room (ER) visits for asthma and hospitalizations for respiratory and cardiovascular causes, to premature mortality. The economic costs of such effects are substantial.

Little is known, however, about the financing of pollution-related health care. If such care imposes a significant burden on insurance companies and employers, they would have substantial stakes in improving air quality. Reduced medical spending could also benefit public programs such as Medicare and Medicaid.

The primary objective of this study was to determine pollution-related medical spending by private health insurers as well as by public purchasers such as Medicare. The study focused exclusively on hospital spending, though doctors' visits and other medical care also result from air pollution. The study did not address broader impacts of air pollution on health, which are important but better understood. (Table 1 lists more health endpoints associated with ozone and PM2.5, identified in U.S. Environmental Protection Agency [2008], but is not exhaustive.) The cost of air quality improvement is also important, but outside our scope.

Known and Quantified Health Endpoints Associated with PM2.5 and Ozone

To pursue our objective, we quantified the hospital spending incurred by health care purchasers/payers from 2005 to 2007 that is attributable to California not meeting clean air standards. Millions of people were exposed to significant air pollution during this period. In addition, the state of California collects and discloses appropriate clinical and financial data on hospital care, in particular, data on spending by payers for pollution-related admissions for cardiovascular and respiratory causes, and ER visits for asthma. As the report describes in detail, we used epidemiological studies and actual pollution patterns to determine how meeting federal air quality standards would affect the number of acute health events requiring hospital care. We used actual patterns of hospital care to determine the potential reductions in care delivered at specific hospitals. Finally, we used actual spending patterns to quantify the cost, and therefore the potential spending reductions, for different types of payers.

Table 2 summarizes our overall results. Meeting federal clean air standards would have prevented an estimated 29,808 hospital admissions and ER visits throughout California over 2005–2007. (To prevent double counting, hospital admissions are defined to include hospital encounters that began in the ER but that led to an admission.) Nearly three-quarters of the potentially prevented events are attributable to reductions in ambient levels of fine particulate matter, that is, particulate matter with an aerodynamic diameter of less than or equal to 2.5 micrometers, which we abbreviate as PM2.5. The rest of the prevented events are attributable to reductions in ozone.

Air Pollution-Related Hospital Events, Spending, and Hospital Charges in California over 2005–2007 Caused by Failure to Meet Federal PM2.5 and Ozone Standards, by Pollutant, Endpoint, and Population

Events, Spending, and Hospital Charges in California over 2005–2007 Caused by Failure to Meet Federal PM2.5 and Ozone Standards, by Payer Type

These results suggest that the stakeholders of public programs may benefit substantially from meeting federal clean air standards. Private health insurers and employers (who contribute to employee health insurance premiums) may also have sizable stakes in improved air quality.

These case studies are a diverse group. We reviewed and qualitatively selected hospitals according to the following criteria: the scale of potential prevented events and spending reductions; geographic region; and payer and patient mix.

Figure 1 shows the number of events by patient zip code. These events are concentrated in the San Joaquin Valley and South Coast air basins. St. Agnes is located in the former, while Riverside Community and St. Francis are located in the latter. PM2.5 and ozone levels in these areas substantially exceed federal standards. A sizable number of events originate in and near Sacramento, where the UC Davis Medical Center is located.

Pollution-Related Hospital Events throughout California over 2005–2007, by Patient Zip Code

Stanford University Hospital is located in the San Francisco metropolitan area. Moreover, as Table 4 shows, private insurers were expected to pay most of the bill for 46% of Stanford University Hospital's patients, versus 31% for California as a whole. At the other extreme, private payers paid for only 14% of patients at St. Francis. Medi-Cal paid for 59% of patients, compared with a state average of 22%. Among the case study hospitals, the Medicare share was highest at St. Agnes (50%) and lowest at St. Francis (21%).

Figures 2 through 11 show the number of air pollution–related events at each of the five case-study hospitals:

At Riverside Community Hospital, 329 hospital admissions and ER visits would have been prevented had federal standards for PM2.5 and ozone been met during 2005–2007 (Figure 2). Private health insurers paid most of the bill for almost half (149) of these patients. Medicare was the next most frequent payer for these preventable events. Overall, spending was $2,015,880 (Figure 3). Medicare spent about $1,140,060, as these patients were relatively likely to have costly hospital stays, rather than ER visits. Private insurers spent $708,700. 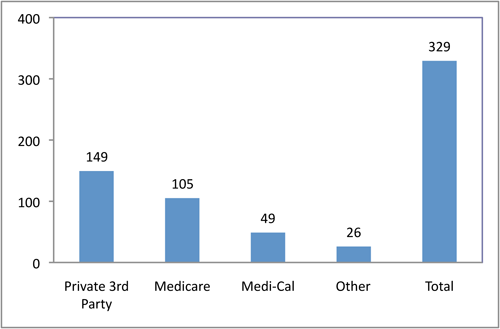 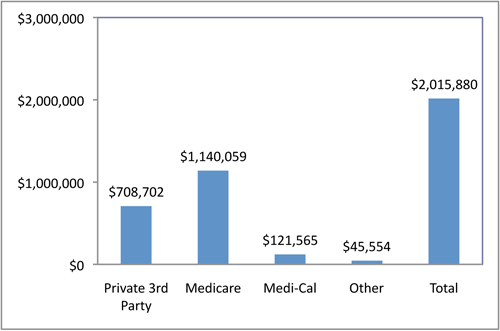 At St. Agnes Medical Center in Fresno, failing to meet federal air standards had even greater effects: 384 hospital admissions/ER visits occurred (Figure 4) and $2,976,936 was spent (Figure 5). More than half of these events (208), totaling $1,913,116, were paid for primarily by Medicare, consistent with its above-average importance at this hospital.

At St. Francis Medical Center in Lynnwood (south of Los Angeles), 295 hospital admissions and ER visits occurred (Figure 6). Medi-Cal was the primary payer for more than half of these events (156). The next most frequent payer, Medicare, had one-third as many events (51). Nevertheless, Medicare spent $716,979, partly because Medi-Cal tends to pay less for hospital care. For example, Medi-Cal spent $9,482 on average for pneumonia admissions for those 65 and older, compared with $10,882 for Medicare. Overall, failing to meet clean air standards led to $1,220,595 in spending at St. Francis (Figure 7).

At Stanford University Hospital, 30 hospital admissions and ER visits occurred (Figure 8), costing $534,855 (Figure 9). Figure 1 shows that fewer events occurred in the San Francisco metro area than in other parts of the state.

At UC Davis Medical Center in Sacramento, our final case study, 182 events occurred (Figure 10), and spending totaled $1,882,412 (Figure 11). Medi-Cal was the most frequent payer (81) for these preventable events, while Medicare would have experienced the largest spending reduction ($855,499).

These case studies underscore that health care payers could enjoy substantial reductions in hospital spending from improved air quality. The payers who benefit the most vary substantially across hospitals and communities.

This work was sponsored by the William and Flora Hewlett Foundation. The research was conducted in RAND Health, a division of the RAND Corporation.