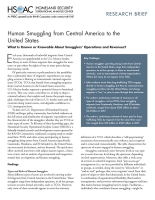 Human Smuggling from Central America to the United States

What Is Known or Knowable About Smugglers' Operations and Revenues?

Each year, thousands of unlawful migrants from Central America are apprehended at the U.S.-Mexico border. Many or most of these migrants hire smugglers for assistance or pay others for rights of way at some point during their journey north.

Of particular concern to policymakers is the possibility that a substantial share of migrants' expenditures on smuggling services is flowing to transnational criminal organizations (TCOs). TCOs that benefit from smuggling migrants from Central America to the United States across the U.S.-Mexico border represent a potential threat to homeland security. They can create, contribute to, or help to shape a criminal industry that exploits and harms the people smuggled, challenges the rule of law in U.S. border states and the countries along transit routes, and degrades confidence in U.S. immigration laws.

To date, the U.S. Department of Homeland Security (DHS) and larger policy community have lacked evidence on the full extent and distribution of migrants' expenditures and the characteristics of the smugglers, whether they are TCOs or other types of actors. To fill some of these knowledge gaps, the Homeland Security Operational Analysis Center (HSOAC), a federally funded research and development center operated by the RAND Corporation, conducted a scoping study to understand how TCOs and other actors participating in human smuggling along routes from Central America (specifically, Guatemala, Honduras, and El Salvador) to the United States are structured, do business, and are financed. The quick-turn effort involved interviews with subject-matter experts, a literature review, and an analysis of governmental and nongovernmental data on migration and human smuggling.

Types and Roles of Human Smugglers

Many different types of actors are involved in moving unlawful migrants from Central America to the United States. These smugglers range from independent operators, to ad hoc groups, to loose or more-formal networks, such as TCOs. However, only some of these networks appear to meet the statutory definition of a TCO, which describes a "self-perpetuating" association that systematically uses violence and corruption and is structured transnationally. The table characterizes the spectrum of actors engaged in human smuggling.

Smugglers commonly move between levels or can operate at more than one level along the spectrum, depending on their opportunities. Moreover, they offer a wide array of services to unlawful migrants, from "pay-as-you-go" arrangements (i.e., services provided by different individuals or groups, as needed, along the route) to "all-inclusive" or "end-to-end" packages that cover migrants' travel from their point of origin to their final destination in the United States. A combination of organizational flexibility, fluid market arrangements, and pervasive subcontracting suggests resilience that makes human smuggling hard to target. Facilitators — individuals who coordinate human smuggling — might be less replaceable and present a more fruitful avenue for intervention, but going after them might be challenging, especially when they are based in foreign countries, as is typical.

Drug-trafficking TCOs do control primary smuggling corridors into the United States and charge migrants a "tax," known as a piso, to pass through their territories. In addition, drug-trafficking TCOs may also coordinate some unlawful migrants' border crossings to divert attention from other illicit activities, and recruit or coerce some to carry drugs.

Most TCOs' activities and revenues, apart from the piso, cannot be separated credibly from those of other actors that engage in human smuggling. However, the researchers were able to use data from DHS and other sources to construct a range of preliminary estimates of total revenue to all types of smugglers operating along routes from Guatemala, Honduras, and El Salvador to the United States.

The researchers' preliminary estimate of those revenues ranged from about $200 million to about $2.3 billion in 2017. The breadth of that range reflects the uncertainty of the underlying estimates of unlawful migrant flows, migrants' use of smugglers, and smuggling fees.

Separately, the researchers produced a preliminary estimate of the taxes, or piso, that migrants pay to drug-trafficking TCOs to pass through their territories. Those payments could have ranged from about $30 million to $180 million in 2017.

A lack of reliable data contributes to substantial uncertainty in both estimates.

HSOAC made three main recommendations for how DHS might use findings from this research to target human smuggling, allocate resources, and improve data collection.

Use information from these revenue estimates to inform funding decisions. DHS could draw on information on the value of the human smuggling market, including comparisons with other illicit or analogous markets, to help guide decisions about allocating resources to efforts to target and disrupt human smuggling.

Improve data collection. DHS could consider standardizing and expanding the range of questions that border officials ask migrants during interviews to seek more consistent and detailed information from migrants about smugglers, routes, and payments. Other options include a shared portal for data entry that screens for errors and a randomized survey process to facilitate data collection and reduce the burden on frontline personnel.